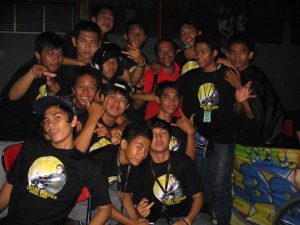 I arrived to Palmbang about 2pm and just directly went to find a place to stay, I had plenty of time and I was looking for a better place than usual I use, due to it was new year and everyone was celebrating new year, so I would like to be happy and take a part with people.

The problem was that Palembang is a big city in that area and most of the hotels were full, so it took me few hours to find a place to stay.

I took a shower…I was so tired and hungry, but I was happy due to there was many western food and after 20 days I could have some different foods and some food regarding to what I really like. After having a some sandwiches and pizza I began to look for a place to celebrate new year. I took my bicycle and headed to nowhere, just took a street and go to see what is going on there … After few minutes cycling I found a big party with too many people wearing the same shirt, a big stage and DJ music…lets go see how it is.

It was a biker party and they were all bikers belong to the same club. I went inside, but after few minutes I saw that I know no one, and just music was not very interesting for me, so I was about leaving there. I the gate I asked a person who was there, if there is any different performance of just DJ music and suddenly everything changed. As a person who nobody knew him and no one care about him, I turned to a famous person and became very important.

When they knew that I am cycling around the world, they called their friends and took me to a place which was for the important guests. Many people came to me to talk about my trip and etc. but suddenly I heard an announcement from the stage and they called me to go there to introduce me to the audiences. They gave me a gift and after that they treated me like an actress. Everything changed and I was really happy. There were a couple came to me to have a picture together and after that just we began to chat. It was how I changed the year, however it was not my new year and it didn’t make a sense for me due to my new year is the first day of spring, but I was happy due to the people were happy. Irwan and Lutfi were really nice and kind to me. We were together till the year changed and we celebrated it together. And after that they invited me to their house for tomorrow. 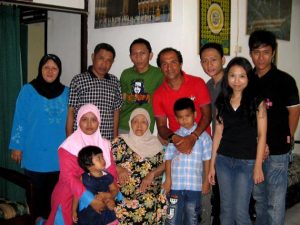 I had many activity and no time to rest, what I really needed. On the next day about 11am Irwan came to my hotel to pick me up and we went to his house .I spent almost all the afternoon with his nice family. There was a good chance to meet local people and stay with them and know about their life style. On the second of Jan I was about leaving Palembang to Jakarta …..still 500km. I left the hotel very late, due to I had to rest more and about 13pm I began again to hit the road.