Jumbi to Palembang and Marriage party

Jumbi to Palembang and Marriage party 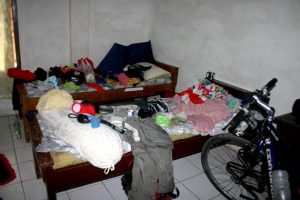 In Jambi I couldn’t wake up early. I was still tired and needed more rest, but there was no choice and I had to leave. Just I told myself, be relax and don’t be in rush. I left the town about 10am and began to ride ahead to my next destination which was Palembang, a city about 280km from Jambi. I was about doing that by 2 days, but just after 20km ridding I saw a wedding party and just stopped to take some pictures.

Puput a beautiful Indonesian girl who was the brides sister asked me to stay there for a couple of hours, so nice invitation. So I had a chance to see the Indonesian wedding and for sure try more different traditional foods. Puput could speak English very well with a good accent, I was lucky due to I asked many questions about their custom, culture and ….

After a warm welcoming from Puputs family I left there about 2pm and began to cycle again. I was thinking of people of Sumatra, they are really warm and welcomed people. I really love them. 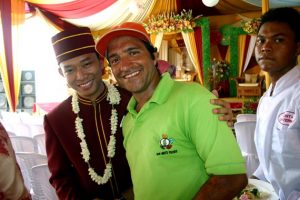 It was about 6 in the afternoon and there was very black and dark cloud on the sky, it was a sign for a heavy rain and I had to find a shelter before rain began to hit the ground. There was a school on the road and a small shelter for their play, I went there to put my tent under the roof, but again someone came to me and asked me to cross the road and stay in the mosque. An empty mosque in a very small village. It was rainy and there was no power, listening to the sound of rain drops which were hitting the roof with a small light of a candle …..wow so nice and touchy.

I have to say that that night was my best night all over my trip and I had very nice feeling, which is really unexplainable. I was so light, like a feather playing on wind and just flying. I didn’t like that night finish, I would like to continue forever, but I am in the earth and there is an end on everything. In the following morning, the people brought me 2 times breakfast!!!! How great people are these people. I was so happy that I left there began to cycle again for a whole day till next evening. The next night I asked a family to let me to put my tent in front of their garden and as always in Sumatra they invited me to their house.

Again no words to communicate, but some wonderful feeling between. I took shower by water of river and after having a small dinner in a very small shop I came back to the home. The guy living there invited about 15 of his friends to see me and still no word. I was tired and just I slept and in the next morning I began to cycle without having any breakfast. I had some eggs with myself and asked a shop to fried them for me and also some hot water. When I wanted to pay for their job, they didn’t accept money and they told me , you are our guest……just you have to travel to Sumatra to see how people there are wonderful. There was no more cycling to Palembang, just about 70km. a very easy day. Fortunately it was the new year and I was arrived to a big city, and there was a chance to celebrate the new year. I was so lucky.

I searched a lot for a room, due to the hotels were almost all full for new year. Finally I got a nice room to have a nice day for new year.

There was some thing nice to happen in Palembang and I will write them later.