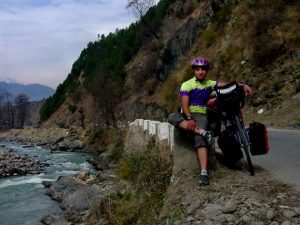 When I arrived to Manali I felt a little bit pain because of cold and also I had some fulwork days ,so it made me tired and just I needed to rest,but that area was wonderful and I couldnt ignore its featurs.fortunatly Vashisht (a small vilage about 3km far from Manali)which I staied there has a hot water spring and everynight I came there to have relaxation. just by half an houre walking from VASGISHT is a very nice waterfal and in the first day I went there to visit .really I felt tired in my legs and it was very defficult to go up from the mountains .

Also there is a lake on the top of one mountain and I liked to visit it ,but I couldnt due to I didnt have any equepments for climbing like kerampon and good clouths .tirness made me so sad due to I couldnt do as I liked .also there was another problem which was veri bad dream which I saw .by some reason I loosed my enerjy and I couldnt also climb to the top of a mountain near Manali .I tried it ,but I didnt have any enerjy not physical and not mental .for the first time during my trip I felt tired and just listening to my favourit music made me calm and I knew that I have to rest more due to when body feel tyred I will loos my mental enerjy also .

Let me tel a story about feeding in a Temple in Vashisht .last night of my staying in Vashisht there was a public dinner in a Temple just opposite to my room and I liked to see them ,so I went there .at first all the people stayed to ful all table and after that someone began to give others food which was rice with some beens and something sweet .there was no spone and the man was giving rice by his hand .wooow in Iran I never eat like that but there was completly different .when he gave me rice I began eating and after a short time I felt that all are looking me .I looked around secretly and I found that nobody is eating and after that I found that they are waiting to eat together and when the man gave rice all ,they start eating and also when all finished their food they left table together,it was my new experianc from hendos eating . so I left Vashisht after 3 days and I biked to Mandi .in Vashisht I couldnt have a good rest and even after that I felt tirness in my legs but I didnt care about it and just by biking I tried to increase blood circulation to get out lactic asid in my muscles .I found that just by work I have to get relax and during the trip I can not have good rest due to having rest means that I have to take a room and stay in a city and for all I have to pay and it make more expences .so just I have to recover myself by exercise and recover myself by just mental ways .so I biked on tirness for long time and just when the sky was getting completly dark I could find a place to put my tent .there was a road that was river in a side and the other side was mountain and no place to stay .so when I found a way to near river I beca,e very happy specially that that point was best point of road .so I put my tent near the river and in front of a waterfal with morethan 100m hight . I never forget that place and best place which I had put my tent .by the first time I told myself that tonight I have to eat fish and after making camp I collect some small equipments which I had for fishing and I went near the river to get fish for dinner .I was really happy that I had a chance for fishing .so after half am houre I left it on a stone and I went to walk around and discover it . just after 15 minute whenI came back I saw that there is no stone which I put my equipment there .

After a few minuts searching I found them on the water and 60cm on water .ya dont think that they slided and felt on water ,no the level of river had became up more than 60cm .so I you was me what you think and what you have done .I didnt know for what ? I have to acknowdage that for the first time in my trip I scared alot .there was no place to stay and in the other hand biking in that road at night was more dangerus than staying there .and most important thing which was I didnt like to loos the beautiful scenery of waterfal in the morning .

so I sat on the enterance of tent and just I gazed at water for along time and waited what will happen .after that I put a sign betwen water and my tent and I said myself if the water come closer than the sign then I will go and I checked my mobile for alarm on 12,1 and 2 but for sure I couldnt sleep .time was near 12 that one memory from childhood helped me to become relax and after that I sleeped and I didnt wak up for 1 or 2 and just I woke up about 7 on the morning .when I found myself alive ,wooow vey nice feeling .a day after I found that it was near the dam and they cloused its valves at night and due to coming up the level of water .