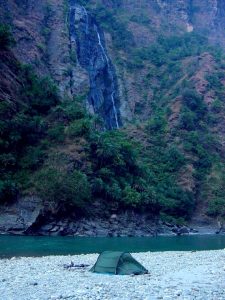 Wooow I am alive yet and it was my feeling after a harmful night near the river .so I couldnt enjoy as I liked but also I saw that and again I started biking on a beautiful road .I Lnew that after 2 days I will leave mountain and hilly roads and I have to enjoy by all myselve.I was so close to Mandi and just after 2hours I got there . I wanted to try to find a way to plant a tree there but after just afew hours I found that here I wont have any effect and the other hand I was mentaly tired from last night and I coulnt spend more time in a very noisy and confused place like that and it is better to find a place to rest and recover myself .so I continued with tirness which I had in my knees but I know myself and I knew that just with more exercise I can put my mental tirness away ,and just I biked about 55km after that .

Near the darkness I was on the road and I couldnt find a good plae to camp and finally I staied on a temple and I made a camp there.it was ok for a night and a day after I start biking early on the morning about 8:30(it is early due to here sun marging about 15m to 8)and just after start upslope began for morethan 15km and it was not just a upslope and there was more .one of most defficult days of biking during th etrip til now .and just I biked about 8:30 hours in that day and I arrived to Ranipur.it was complatly dark that I got there and just I was looking for a place to rest and it had to be a city because I needed internet to update my website .

there was a youth hostle and I went there to take a bed but they said that I have to take a seperate room and from their speech I could undrestand that they didnt give me a shared room due to I was from Iran and the man said that we can not give him a shared room with other forigners ,it was worst memory from India and I dont know when we can leave in a same earth without facing with this rule manners .I hate them and for sure I never staid there with some stupide men there.I dont know if nobody was there to say them if he want to terror someone he used of faster machin not bike .

I never forget this cruel manner . however after that just I got off from there and I took a room in a hotel .by the way after about 20 days I could eat meet there and it was very deliciuse specially after long time .I had much time due to just I had 40km to Chandigahr and I face with 2 days holydays and I had to stay there to plant a tree in Chandigahr due to it is capital of 2 province and a big city .so I was not in horry and I could wash my chain and wash my clouths and just I started biking about noon to Chandigahr .