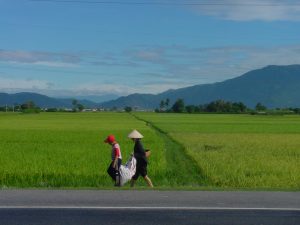 My Indonesian visa is expiring on March 11, 2008 and I have to leave the country before that. I just realized that February is 29 days and that I was running out of time. I have to cycle to Bali and reach there before March 6 as March 7 is a holiday which is the Hindu New Year and day of silence (Hari Raya Nyepi). During Nyepi, there is no electricity in the whole town and no activity is allowed. From Jakarta to Bandung, which is the next city after Jakarta, it is about 200km by the toll road but the bicycle is not allowed to enter the highways in Indonesia and I had to take another road which is almost 2 times farther than that road so to save time Arianne asked her driver to take me to Bandung and I actually began to cycle from Bandung.

Arianne’s driver was driving so slow so I asked him to let me drive and he was scared of the way I was driving. We arrived in Bandung about 13:30pm and after getting ready I began to cycle about 14pm. Oh after 50 days just eating and no more activities how hard it is to do a hard job. I cycled about 60km in a very cool day. A cloudy day with a wind from behindâ€¦so cool for riding. It was about sunset that I found a mosque and I went there to sleep. They accepted me warmly and I reloaded my bicycle and put my stuffs inside the mosque and took a shower. It was nice because I had to take water from the hole (well) to use to wash myself. I love that. After a short time a guy came and asked me for my documents, he could speak English a little bit.

After I showed him some letters he left and I was just sleepy and I died. I left my bicycle outside and I just locked it but it was about 1am that the sound of some movement woke me up. I saw that the same guy was carrying my bicycle and taking it inside the mosque. He told me that it is not safe outside and he worried about that. He even asked a family living just next to the mosque to take care of my bicycle and he left it in their house. By the following morning I woke up at 5am and again the same guy came bringing me hot water and 2 fried eggs.

I left there at 6am and began to cycle in a cloudy day but in that day there was too much rain during the day. I cycled about 135km and I was completely soaked. Unfortunately when there is rain I can do nothing but just to keep on cycling. Nothing special happened in that day and just I cycled until the evening and in the evening I stopped by another mosque to sleep. The people there kindly accepted me and I put my stuff inside and I took shower again with water from the well. I was so tired and I just wanted to sleep but some old men came and surrounded me. There was no words to communicate with each other and just after they asked me some questions and I answered with the little words I know in the Indonesian language (Bahasa Indonesia), they began to talk with themselves. Oh my GOD how boring it is that some people came around you because of you but they talk to themselves and you cannot understand what they were talking about and worse than that is that they do not want to leave and it looked like they were going to stay there until morning. I was thinking about how I can escape from that situation then suddenly I found the golden moment. It was the time for prayer and they began to pray, it was the best time. I just told them “salamat malam” ( good night ) and before they have time to come inside the room I switched off the light and slept, even I did not have time to brush my teeth because I was afraid that they will gather around me again and have fun again. I am not a bad person but I was really exhausted and I couldnt stay on my legs and my eyes were too heavy. I had a wonderful sleep. For about 8 hours I felt nothing and just very deep sleep.

It was hard to wake up at about 5:30am and just after 30min I began to cycle. I did not even stay there for breakfast and I preferred to have it on the way. Just after about 20min cycling, I passed a school and I saw that the students were having aerobics on the school yard. I was so excited and I joined them to do some workout with them. They were very well performed and I couldnt follow them and it made them laugh sometimes. I was really happy enjoying being with them. After they finished I went to talk to their teachers then I saw that all the students were in line waiting to shake hands with me..wow, so great, so wonderful feeling. I began a wonderful day like that.

I cycled again about 135km until 6pm and I had just some short stops for lunch and some break and also to use the Internet and the rest of the time I was cycling under the rain, soaking wet, cold and tired. I arrived to a mosque at 6pm and now I am here inside the mosque writing.

I cant keep my eyes open any more. I am so tired and sleepy.