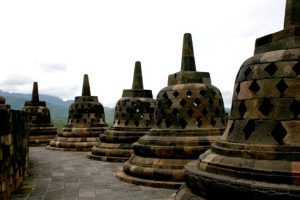 The last day of cycling before Jogjakarta was an easy day and just I had to cycle for about 60km. I began to cycle quite late about 7am because I was working the night before and slept late. I knew that I will have a day of rest in Jogjakarta so I decided to push myself and test my body performance and also my heart performance. So just I cycled very hard like when I was doing during my training years. For 2 hours just I pushed myself and I worked very hard thats why I arrived to the town around 10am.

I had someone to host me there. Putri who is a member of HC responded to my request for accommodation. It is very nice to tell that Putri is not in Indonesia and she is in US right now but regarding to the Indonesian hospitality she answered me and asked her parents to take care of me while I am in her town (in my experience so far this happens only in Indonesia). In my last article about Indonesia, I will write about the Indonesian people and explain why I love them very much and why Indonesia is my favorite country. The night before I arrive in Jogjakarta, I called Putri’s mother and she sent me their address. It was easy just I had to follow the address. I called her and informed her that I am in the town and after 15min I was standing behind their door.

By the first look I realized that they should be from the royal family and after I talked with them I found out that I was right. A very nice house with well mannered maid and everything was very tidy. They gave me a room with all stuff and after that I took shower and washed my clothes, then I had lunch with Putri’s parents and it was time to chat and talk about my trip and etc.

The most important thing which is a must-see in Jogjakarta is the Borobudur Temple, which is the world’s biggest Buddhist temple and one of the great man-made wonders of the world. I visited it and since during that day there was no rain I preferred to go there straight away and did not leave it for tomorrow because the weather is not certain at all here. So I just took a bus to the terminal and then another local bus for Borobudur which is about 56km far from the town and it is located in a very small town named Borobudur.

I arrived in Borobudur about 4pm and directly I went to the temple and it was amazing, so beautiful and great. But there was something funny to happen which is fun. There were many young students there and their teachers assigned them to practice and talk to the foreigners in English â€¦.they came to me and asked me to talk with them but mostly we were taking pictures there, I was so popular there and it was fun spending time with them. They were cheating their teacher and asked me to write just my name and sign the paper and they will complete the other questions in the form by themselves. Meanwhile I met a guy from Romania and we spent a while together and after that I realized that there was no bus anymore leaving for the town after 5:30pm and I was stuck there and nowhere to go. It is a remote town and so far from the main road. So it was a good reason for the motorbike or taxi drivers to try to pull out some money from my pocket. They asked me for 200,000 Rupiah but I only spent Rp10,000 coming there. Oh no, I was not going to pay that much money and I had to find a way to come back. There were many bikers around me and offering to help me but I began to walk side on the road and just ignored them. After about 500m a guy who was staying in the entrance of a house just by the road called me and told me he is going to help me, the first word that I used was “berapa?” ( how much) and he said no, no I like to help you and I will take you to the main road for free just come here to have a rest and drink then I will take you there on motorbike. It was great and in that time he began to tell me his private story of his religious life and how he became a Christian from Islam. It was nice to listen to him and I was happy to be shared with someone’s story. After a short time he took me to the main road and there I could catch a local bus for the town and I paid just Rp 7,000!!!! The bus was so crowded but I really like that it was full of people. I like to experience the way that the local people are living and I enjoyed it. Today I was a little bit confused because I was thinking to leave but I needed more rest and also I had something to do so until noontime I was not sure about my plan and just after that I decided to stay overnight again in Jogjakarta and to leave by early morning the next day.

I also received some e-mails from HC people who accepted to host me but I was already hosted by Putri’s parents so I just called them to meet up. Andre who is an Indonesian picked me up at 4pm and we went to his place which is a dormitory and there were some nice people there and the topic of our conversation was mostly about Iran and its situation nowadays.

After that we went to see the main street and around the town and while we were having dinner, I received sms from another member of HC who is Paul from Lithuania inviting me to his house to stayâ€¦.so great people here. I called him and just we made an appointment to meet and have something to eat together and chat which was really fun. Paul catch up with us from near his house and we went to a restaurant to chat and I spent some more time with nice people there.

I just came back and began to write and ohhh my GOD too many things to do! I have to pack my bags and still write more for Persian reports and make some pictures .and I’m so sleepy. The room is so messy right now and my stuffs are all around the room, the clothes are hanged to dry and so messy I will make it somehow (I have to do it..heheheh).