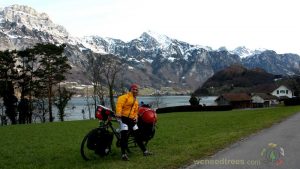 I was in Zurich for few days and life was going on there beautiful. still I didn’t have any of how to go through Switzerland. Just 2 days before Christmas Eve Benno called me and we decided to be in his brother’s house for the Eve. So Benno would come to Zurich by train and we proposed to meet on lake Zurich. I had some friends in Zurich but still I haven’t met any of them and I just kept the hope for the time I come go back to Zurich on the middle of January,
just an Iranian young couple who I met in a restaurant before leaving. I went to the lake Zurich to wait for Benno and I was wearing my cycling cloths, a young couple who saw the name of Iran on my cycling short began to talk as they have been in Iran and they had a wonderful experience of being there. They were telling about Iranian’s hospitality and so on which I saw Benno coming. I called him but he didn’t hear and he just passed. I ran after him to tell him I am there and then we were walking back to my bicycle which suddenly someone called “ Mohammad” !! I was surprised that who calls me? I returned and I saw Brendon who I met in July 2008 in Melbourne. We had a lunch together and now after almost 5 years here again in Zurich. 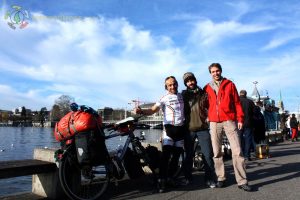 It was great and such a small thing could make my day. Life is full of little things to make me happy and bring me joy in my heart and even sometimes tear in my eyes. some says “world is too small when something like that happens” but I believe world is too big and everyone’s world is the size of his/her way of thinking. We humans are some dots which when we move we make a line and of course there is always a chance for the lines to cross over. If we don’t move then we would be single dots and we would never see something like meeting Brendon happens. It was almost noon that we started cycling to a small city called Mols.
We had to cycle around lake Zurich and then about 10km cycling through the fields near a river and afterward another lake appeard in a beautiful valley. It was completely dark that we arrived to Martin’s house ( Benno’s brother ) to stay over night and celebrate Christmas Eve. His sister also were there and I was quite happy to be with a family and enjoy being all together. Next day we decided to cycle to a city called Ainsiedeln. There is a monastery there, a big one which pilgrims who are on the way to Spain stay there to have some rest. They offer rooms to pilgrims and we could also considered as pilgrims somehow. on the way to Ainsiedeln we had to cycle through a big climb. It was fine at first 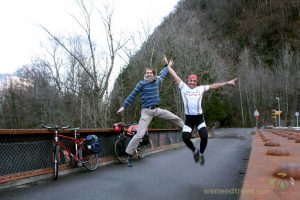 but anyway I am too heavy these days ( my bicycle not me myself !!) as it is winter and I have to carry to many stuff with me and more cloths. we should I think climb around 750m in a short ride which was really steep. we arrived there around 4:30 and we directly went to the monastery and took our room.
It was funny that after more than 2 months cycling in winter time in Europe and having some very cold days still I was fine without even a small cold and just we had 2 very fine days with sunshine and warmth and I caught cold!! It was really strange for me but anyway when it is cold I take more care about my health then when the weather is fine. I took a shower and Benno wanted to go out but I was not feeling quite well. I was sweating which was not a good sign actually with a little bit of fever. I just squeezed into the blanket and Benno went outside. I was feeling so good under a very warm blanket after the cold of last 15km and having cold under my skin. I even didn’t want to go for dinner and the best thing for me was just staying there under a warm blanket!! Benno returned and we went to the restaurant to have dinner and afterward we went for a walk. I was feeling much better but still bed was the best place to be.. I slept so well that night because last night also in Martin’s house I couldn’t sleep well.
I was sweating and I had a bit of fever, so this night in monastery was great and I knew it will help a lot for me to feel better. it is so important to keep in 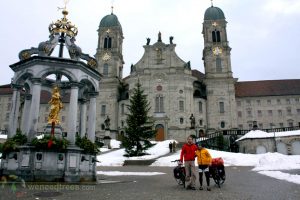 while traveling and even a small cold can make a big change in your plan and I didn’t want to be on the bed next days… Finally it was time to go to Lucerne to visit Margareta and Louis. They are somehow like a god parents for my journey because they are the first one who supported my journey. They sent me 500$ and it was the money I started this journey and weneedtrees project. they are very important to me and I was so glad to see them, hug them and spend sometimes with them. I was not that fresh and I couldn’t actually cycle quite well. I didn’t mention it to Benno but I was down a bit with some headache. We kept cycling and I was trying to do it well. Anyway Lucerne was not that far, we just had to cycle 50km and Benno after 35km took a train from Arth to go back to Berne. I was feeling of a mixture of joy, excitement and purity of love. I love them a lot and I have a big respect for tem and what they have done for me. It is true that now, there are people who can easily trust on my project and help because they have already seen the proof but Margareta and Louis did not. They supported me when they didn’t have any proof and they were not sure either I can or want really do it or I am just talking about it!! Always I have a big respect for people who trust before they get proof and it is the way actually GOD wants us to be. To trust and go before having guaranty which is one of the biggest aim on my journey to learn it and act it as well, and I Should admit honestly it is not easy to have that level of trust. 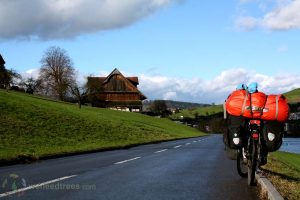 We had 15 min time before his train come, so a coffee is the best to enjoy the that time and after that I just cycled to Lucerne. I was not that fast as I liked to feel the moments of getting closer to people who I love. The time itself was so pleasant and the joy I had in my heart was so beautiful, I wanted to last longer. Finally I was there at the door…after 7 years. It was so good to meet her, hug her and share some wonderful moments with them. I was in Lucerne for 3 days and almost all the time I Was at home. I didn’t want to go anywhere or see anything. I was there just to be with them and see them. So I almost spent all the time at home next to a big window opening into the lake and enjoying the life there.
Just on Thursday afternoon I went out with Peter who I met in Zurich outside for a short drive around the lake. Peter had cycled through Iran and many other countries and he is planning to go Africa in 2 weeks. We had a lot to share because not only we were both cyclist but also we have the same idea of life and we look at life in the same way.
on Sunday Benno came over to have breakfast and after that we started cycling to Berne together. I wanted to show him Louis´s train system which he is building up. I was fascinated myself when I saw it first. it is exactly like a real train system with all its complex and it works the same. Benno was also fascinated by the train and I have a big respect for Louis for his work which was realy something for me.
as usual we didn’t start early, it was almost 11:30 which 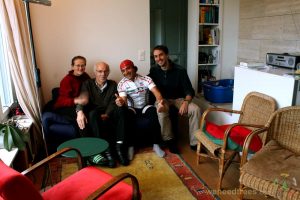 with Margareta, Louis and Benno

we left Lucerne. we were cycling through the main road but there was a very small road through the mountain but almost 6km shorter. It was more easier to cycle through the main road but I asked Benno to take the small one, so we could enjoy more from beauty of mountain. we were climbing a hill and I was almost tired and needed a rest, a car passed and a lady sitting in front turned to look at me!! Oh my GOD!!! She was a friend from my city in Iran and we used to go for trekking together, and now here in Switzerland in a small road middle of nowhere…it was wonderful and could make my day. she stopped and we had a tea and of course so much laugh and joy as well and then we continued to Berne with Benno. we arrived around 6pm and now it is time to have some days with Benno and enjoy life here in Berne…. 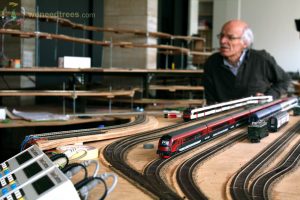 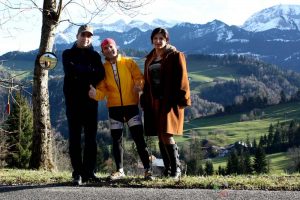