Home MIDDLE EAST Iran I am on the road again

I am on the road again 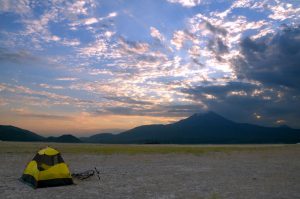 It was already 6 months after I returned home from S Korea to do my peace ride project with Rick. I kept traveling through Iran after Rick left Iran till I came to a point which I found myself quite busy with friends and people on my way.
So I decided to stop cycling in Iran and spend some time on my own, basically training to get ready for the next part of my journey.
3 months later I was totally impatient and I could stay any longer in Iran. I needed to move and to be on the road again.
I had already my visa but I didn’t have enough money to afford flight to any destination to Europe. It is high season and flights are quite expensive, so after searching a lot I found a flight from Istanbul to Milan which was quite cheap but I had to wait 28 days for that flight.
I had no choice, either to wait to see if anything may happen or to book that flight and plan my journey regarding to that date.  I knew there is no chance to wait, and waiting just might destroy my determination. It was time to move again and I could feel it with every single cells of my body and I was ready to leave, so I had to do it.
I booked that flight for 130 $ and I decided to cycle to Istanbul but I was not planning to ride through Iran.
I took a bus next day to Tabriz and I after a day off in Tabriz I began to ride.  I started quite late from Tabriz, 3:30 pm but I didn’t have much to ride that day. It was first days and I should have taken it easy. 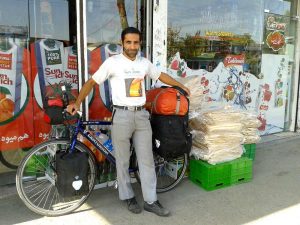 I cycled 80km to Marand where there is a guy living who catches all cyclists passing the town. Akbar I believe is one the most experienced warmshowers and hosts who has hosted over 470 cyclists in a year.
after having dinner with Akbar he sent me to a dormitory belong to the department of physical education of Marand. A room with nearly 40 beds and I was alone.
After a day of cycling I needed to take a shower but it was not working !! so I washed one of the toilets and I took shower in toilet! It brought me back to the few years ago when I should take shower every night in toilet in Malaysia and Indonesia.
Like always I did cycling full day, unpacked at night, had a deep rest and packed again in the morning to do it all over again.
20 km after Marand I saw some 4WD safaris passing by! I realized there are a tour passing Iran and my very close friend Ali is a tour guide for those safari tours.
I just called him and I told him “ Hey Ali…where are you? I smell you near Marand !!” he was surprised and told me he is just 20 km before Marand!
after a short conversation he asked me where I am and I told the story, he replied “ Why didn’t you take a car to the border and start cycling from the border? “ “ I am calling you for that !!- I answered!”
in 20 min I was inside his car driving to the border.
Now I could save 2 days and I could also consider Ankara in my plan to visit.
I left border at 3:30 and began to ride toward Dugbaizid, the very first town in Turkey which is 35km from the border.
few km farther I met a German couple, Ursula and Hans riding in the same direction. So we joined and we had a lovely conversation all the way to Dugbaizid.
While riding I told her how I like to have a coffee and she kindly invited me to have a coffee in their hotel.
It was a wonderful rest in a hot day to have some chai and soft drinks and then I left them. 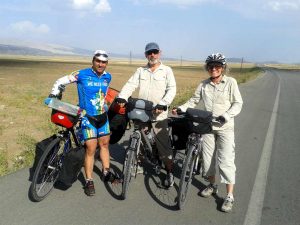 I began to ride toward Igdir and after I was on the road, I looked back to the hotels terrace; Ursula was still there waving for me. How beautiful it was to make such a nice friendship in such a short time and it all comes from not having any expectation and just sharing some good feeling with another stranger like you. 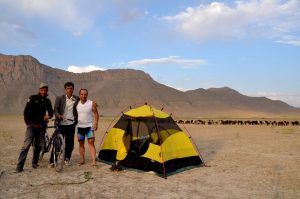 I didn’t have much time to ride and still 49km to Igdir, so I knew it is hard to make it that day. So I decided to camp somewhere far from the town where I could see stars and hear just bugs and birds.
After nearly 10km I left the main road into a dirt road for 2.7km and I found a spot to pitch my tent where I could have Mount Ararat at the background.
Again I had stars as a roof above my head and no wall was separating me from the nature. I was there in to the nature, where I am belonging to, where I have entire peace and where universe is kind of transparent and I can see through.
After I had my morning coffee, some dogs came around following by 2 shepherds. We had a short chat and they left smiling.
Packing again, cycling and breathing freedom.
I had 40 km to Igdir and shortly I arrived there. 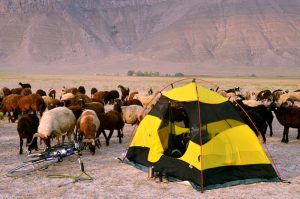 I knew the address of my very good friends parents ( Fatma Bulaz ) but I should call him to inform him that I am at the door.
I met them last year in Netherlands and again here in Turkey they hosted me for a night.
It was so good to experience 2 days with no cell phone and no internet…but it does not last for so long as I should have a cell phone to communicate with my family and friends. Life is all about sharing ….