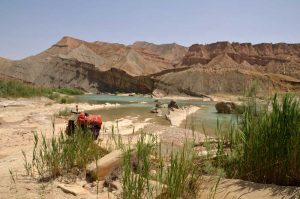 Finally after 2 weeks I left Bushehr. I had 2 wonderful weeks with Mazdak and Alaleh who hosted me and also the weather was getting warm. It was enough to continue my journey south along the Persian Gulf and I had to follow spring farther north. So I decided to go toward Shiraz and then North West where I could go through mountains which is amazingly beautiful in spring.
I knew Mazdak and Alaleh since 2 years ago before I cycle through Europe and they helped me to provide a video about my journey. Alaleh was director and Mazdak was producer for that video.
Knowing them and being aware of their beautiful heart encouraged me to go to Bushehr and have sometimes with them, but like always time was over again with some beloved ones. I had to leave and go for my life, for the road and for the new stories.
I had some friends in Borazjan which is a city 60km north of Bushehr on my way to Shiraz. So my first day was quite easy. A flat road to Borazjan .
I spent that night with Mona and Morteza who are doctor working in hospital and we had a wonderful conversation at night. I was quite surprised to see how I go through people and how we are so synchronized in our thoughts. We spoke about the same things we were concern.
It was really hot when I began to ride after Borazjan but no way! I knew that I might have 2-3 hard days. I had to climb up to 2000m while I began from the zero point at the coast and it was not just about climbing. Heat was the main problem. 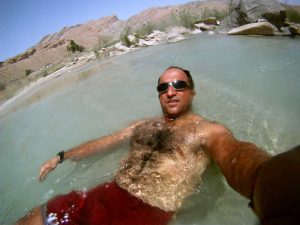 after 40 km I passed a tunnel and it was beginning of a very steep climb. It was too hot and I was about to have headache because of heat. I knew it is almost impossible to climb in that situation, so I should cool down a bit first and relax before I begin to climb.
There was a river along the road and it was the last point I could see the river and I could reach it. I went to the river and jumped into the water which was so cool. I lied down in the water for almost an hour and I even had my lunch there in the middle of river while half of my body was under water.
I could stay there whole day but I had to finish that climb before evening.
I called my mum and she asked of where about I am!! I had a very short answer!! HELL..
I cooled down and I was ready to climb but as soon as I was on the road I was wet again because of sweat.
Just after 300m climbing a 4WD car stopped 10 m a head of me!! he was Mojtaba, my friend who I was going to stay with him in Shiraz.  He yelled that put your bike in the car. I was shocked as I was not expecting him to be there. Still I had almost 200km to Shiraz and he just drove to pick me. he said:  It is too hot, so I came to pick you. We drive to Shiraz!”
10 min later I called my mum and told her : hey mum ..I think GOD does not like me to be in hell anymore!!!”
we were in Shiraz in the evening and my work in Shiraz began.
the very first thing I had to do was finding some schools for my work and meeting my friends.
In Shiraz I was quite active and I had 3 schools, 2 presentations and I met many of my friends and in the weekend I went to visit a national park and also we camped at night in mountain. 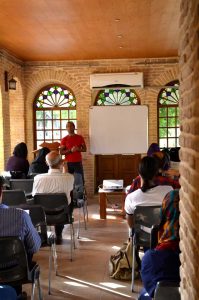 I was planning to leave my bike in Shiraz for few days and go to Kelardasht which is a mountainous place North of Iran with my friend Arash who lives in BandarAbbas.
SO I had 2 days just for myself before I go to Tehran. In those 2 days I had no school, not any appointments and I just wanted to visit Shiraz and its amazing places like old houses, tomb of Hafiz, old bazaar and …
It was pity to be there in Shiraz and do now visit them. So I had 2 days sightseeing and it ended with a dinner with a group of 20 Greeks in a lovely restaurant.
I flew to Tehran and I had some tight schedule to meet some friends there and then Arash and I drove to Kelardasht.
after 3 days having such a relax time in mountain and in a nice villa, I am sitting in a cottage, looking at mountain and forest and writing my diary.
I am planning to go back to Tehran today and then back to Shiraz again to get my bike and continue my journey to follow spring. 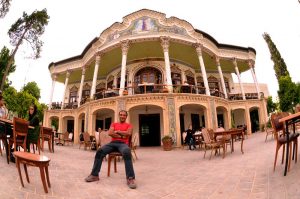