Home EUROPE France Paris to the south of France

Paris to the south of France 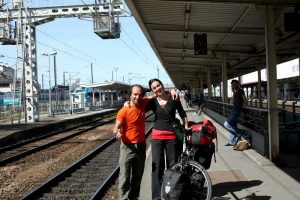 I left Paris by train to Tours, a city on the Luire valley. Again the reason for me to get there was a friend. Always friends and people are the one who make a route for me.
I met Myriam 6 years ago in Varanasi-India while walking along the Gangues at night. I was with Diego my Brazilian friend and in sudden hips of Indian guy attacked her. They were pulling her scarf and she was screaming..it was one of the most hardest moments in my journey. We ran to her and pulled her out of the crowd.
we were all sad and angry…now 6 years later I was going to meet her again but in a very peaceful situation. I was so happy to see her again. I left the train and began to cycle along the Luir river.
I had almost 80km to get there and I decided to cycle and be there before dark. But it was raining hard and I had a very strong headwind. I couldn’t cycle that fast but I was pushing hard anyway.
My French map was not that detail and good and I knew which I should follow the river toward west. Regarding to the map I should have followed from the northern banc where the river would be on my left side.  A pleasant ride and I was enjoying the silence, beauty and peace of being on my own on the road.
I arrived to a village where a little bridge would take me to the other side of river but I preferred to stay on that little road and avoid of being in the main road even though the main road was quite calm and empty. I followed that road but ended and returned by the river side heading back to the east!! I was thinking it might be river which is bending and I will follow it. After almost 4-5 km I arrived to a little village and I saw a map there. In fact river had to branch which the joined in that point and I was trapped in the middle, so the only way was to cycle back again till the first village and take that little bridge to cross.
It was totally dark and still I had 35km to ride which Myriam came to pick me. I was so happy to see her again but in peace. I hugged her, such a wonderful feeling of hugging a friend even though we have met just 30min in total 6 years ago. I came to a fact again which we human beings are so much connected through our hearts even though we don’t meet or contact. We are parts of the same body which are in the same harmony.  As far as I travel and I meet more people, this feeling is increasing in my heart.  This is beautiful feeling which brings a huge peace to my heart and my life and I try to pass it to people surrounding me.
I put my bike in her van and we drove home. First she asked me about my diet!! And of course I have no specific diet. I eat everything ( of course not dog and bogs!!).
an old house in a little village near Samur which is quite famous for cave houses in that area and caves for wines. Also that region is very famous for its wine and of course lots of winery all around the river.
we had a very nice roast beef with Myriam and her partner and I could relax there in a lovely wooden room.
It was Friday evening and I was planning to stay there on Saturday when with Myriam I could go to visit came village and something around the country.
I already did my cycling in France and I Was not planning to cycle that road to the south of France. After Geneva I was planning to go south and just at the lst moments I changed my mind and I went to Paris and also Brussels. So I should save some little time to spend more time with my friend and her family in Biaritz. So I took a train from Samur to Bordeux . actually I should take a train directly to Biaritz but I didn’t have enough to pay and I just could pay the train to Bordeux.
I arrived there at 5:30pm and directly began to cycle toward west where I could touch Atlantic Ocean. I was so happy and excited to see Atlantic for the first time.  Weather was great, finally a warm day and for the first day I could cycle with short and enjoy the warmth and wind on my skin. Almost 100km to ride to the ocean…still I had 3 more km which I could smell the Atlantic, the ocean and hear the waves. It was amazing feeling. I was glad and had a big joy in my heart.
I arrived at 12 midnight and I was expecting to find the cycling path but I didnt!! After just touching the ocean I cycled back more 10km to find a place to camp and I died as usual. 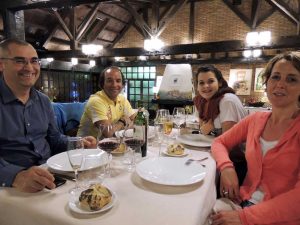 was near Biaritz which Ingrid came and picked me as they are living in a very little town near Biaritz and I was there finally after 8 months. I was glad to see her and have the chance to stay with her and her family.  They are great.
I was in Biaritz for 4 days and luckily Ingrid had some days off also to show me around and while I was there Lein, Ingrid’s daughter organized a tree planting in her school. Honestly I was not expecting her doing that big job and she did it quite well. She organized it all through her teacher Ana who also helped a lot.
I had a very relaxed time there with them and at last we planted a fig tree with the family in their garden.
On Friday April 19 I was packed and ready to start going through Pyrenees and saying goodbye to my lovely friends. I was going to miss them already.
April 25 2013 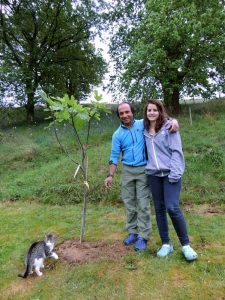