One day in Jakarta

One day in Jakarta I am in Jakarta for a long time but still I dont know very much about this city due to the cities never attract me and I dont like them very much. I am not very interested to visit the nice buildings and malls and shopping centers. Actually Jakarta is not a touristy city and it is a commercial city with many towers and so busy roads and for sure too much pollution. I am not going to explain the town due to I wrote before that I didnt see much around the town just I saw something which was so hard to believe.

In Jakarta you can easily find many nice restaurant which are full of people. You see people easily spend big money for a meal but just you need walk for a 100 of meters to see people who has nothing to eat and they are standing just by 1$ a day.

There is a Golden triangle which is the most important part of business between 2 streets named Sudirman, Gatot Soebroto and Rasuna Said. Almost all the towers and most of the money is in this area. On the north of these streets where they are connected by a rail track you can see another view of the Jakarta what you can see a lot in Jakarta. I watched before the War photography a documentary from James Nachtwey about people who are living between the tracks. I took my camera and bicycle and just within 5 minutes I went to the poorest part which is located in the best part of the town.

It is not easy to explain how people are living there. Just let me explain the situation . there is a big river full of dirt and garbage and for sure many houses are draining their waste water to that river and the rail way is parallel and just next to the river. I saw people who are catching the plastic by a long stick from the small bridge over the river, if there is heavy rain and flood they are happy due to they can catch more garbage, we asked them how much you earn for a day the answer was 1$…… I am not going to say how they are poor due to also in the other hand it is their mistake. They left their town or village and came to Jakarta to live in a big town having better life. But actually they not only have a better life but also they are living in a worth situation you can imagine. I was there taking picture that the children informed me about a train which was coming, I didnt hear anything but they are used to smell the train from distance. ok I can say that the people there has made a mistake to come there but what about the children? Who care about them. They didnt come there by their own and just they are born there. No education and no hygiene, no clean water and .I can not believe it. And in that situation the mafia of beggars who are taking the children from poor families to place on the junctions and pay them just a little money and even no money just some small thing to eat. 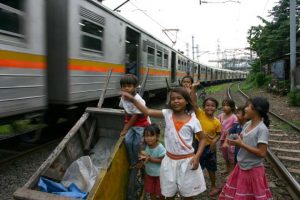 Still the ugly face of Jakarta has not finished. Sorry that I am writing these matters because I amuse to write about beauties and joys but I can not close my eyes on these stuff. now I am going to talk about most corruption police which I have seen in my life. Indonesian police. Just it is enough to say that if police stopped you just put a bill of 50000IDR in your paper and hand it to the police man otherwise you will be in trouble. Almost all the police mans in Jakarta easily asking you money. However in many countries police is so corrupted like Malaysia but here is the worth. Just they show you a bill and then they tell you I can help you and it is your turn to help them to have a nice breakfast or dinner. if I can not say I hate them just I can not say I like them.

However I can not ignore wonderful people from Indonesia. As I wrote before Indonesia and specially Sumatra is the best place which I have seen with the most hospitalable and friendly people. The country is just beautiful and people are great. I love Indonesia and its people. I made many friends here, they all like to help people and they are so kind and warm. I will write an article about Indonesia separately and will explain it in better view.