Home ASIA Indonesia Maningjau lake and cycling off to the road 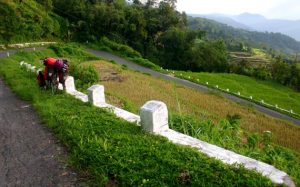 I left Bukittingi about 13pm. I was not in hurry and I had plenty of time and no much cycling. Just 30km from there to lake Maningjau. It was a very beautiful and nice road, just middle of mountain and gong up and down and the last 10km was just very down steep. It was about 50 very sharp curves and just going down. lake had a magnificence view from the top point. A miracle light from the clouds were full oh whole and some spots stimulating the lake. It was like a light playing and a dance from the nature. It was so beautiful. It was enough beautiful that when I was ridding down I began to cry…I couldn’t control it.

I fellow the first person who offered me a room and it was the best choice. A very nice banglo just close to the lake and no more people staying there. I was the only guest and the place was so quite and nice. I stayed there for about 3 days And all the time my job was seating on the seat in front of my room and just listening to the sound of lake and also rain which was hitting the roofs. It was one of my favorite places which I have seen so far. It was enough to say that for 3 days I didn’t take my laptop and I didn’t write anything, just seating and keep quite and relax.

Just one day I went to the village to snap some pictures and that’s all I did. There was a birthday party on the forth night holding by a German girl and I supposed to stay there. But in the forth day morning I felt that it is time to leave and as I always am following my heart and feelings, I boxed my bags, loaded my bicycle and began to hit the road again. I had to climb all those 50 sharp curves which I had enjoyed coming down them, so it was the time to push myself and just work hard and very hard to climb. It took me about 2 hours to climb and after that everything became nicer and I saw myself cycling in a very nice road with a view of the mountain and villages on the down. The weather was cloudy and there was a very very light rain, but whatever that I was coming down, the raindrops were getting bigger and bigger. When I was completely down to the main road, it was rainy and I was soaked. Rain became faster and faster and I had to cycle more 24km to reach to the town and take a room to stay.

After a long time I was feeling cold and shaking. It was very cold and I was not turning the pedals, due to the down slop and it made me more colder. I stopped by the roads and asked someone about hotel, he answered me by his hands…5 more km.ohhh NO.I was already in the town and 5 more km was not so fun. Finally I found a hotel and happily I went inside….it was out of my budget and quite expensive. Ok Mohammad, lets try somewhere else There was another alternative hotel but it was also full. I asked a guy who were in a white suit with a musilm hat and a hand stick about a hotel. He asked me where I am from? The answer was Iran. Ohhh you are Muslim? You can come to my place stay with me. Thanks GOD finally I am getting rid from this situation, but there was something waiting to make me sad. He took me to his house, a very small and simple house. The house was just 2 very small room and nothing there.no carpet, no furniture, and just some walls and a roof which was from some wood pieces and a small place about 2m which was split and one of the was toilet and the other one was kitchen!!!! after I dried myself, he handed me a white suit like he had and asked me to follow him to the mosque for pray. 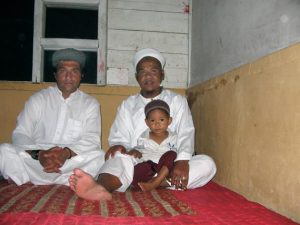 It was nice to see the Muslim community in Indonesia and see who they practice and talk to them. After a long time we came back home…I was so tired and sleepy. I needed just to eat and sleep and there was nothing fun for me. He asked me to follow him to eat and I did. He took me to his family house which was a small another house. Just 2 small room and so messy and many people living there. I was thinking that ok, we will go out for a restaurant to eat, but he asked me to pay for dinner and he sent a young girl to buy some foods. The most difficult part of this story was happening, everyone was there and I had to eat in front of them the food that it is not easy for them to eat. A very young girl was sit near us and he began to eat what was remained from my friends dish, and ….nothing to say.

The only thing that I could do was do not eating the food and just leaving it there and going home to sleep, what I needed too much. I was so tired and sleepy and just I could sleep and nothing else. He lied a blanket on the ground, and it was the only thing he had in his house. He weird all of his cloths to keep warm along the night and nothing to cover himself. I was thinking about his life and his situation that my eyes began to become heavy and they closed. By just after short time the horrible sound of his snoring woke me up and …ohhh it was horrible. I had slept just 40meter away from the rail way, and even the sound of train which were passing each 30min couldn’t disturb me, but his sound was really laud. After about 1 and half hour fighting with myself and just turning around myself I could sleep again. I was truly tired, that’s why I could. But in the morning he woke me up for pray. I asked him, I need to sleep.I asked him I wont come to the mosque. I need to sleep.

He left me and after 1 hour he came back and again woke me up. Hey come have a coffee. I don’t need coffee middle of night, if I drink it then I wont be able to continue sleep. Okokok just sleep. I asked him when you want to leave your house, then I can make my plan to leave here and he answered 7. Ok so please let me sleep til 7 and he said ok. But just after 15min he woke me up again that coffee is ready…ohhh NO please. But already I was awake and after coffee he told me, ok now you can sleep and I tried to sleep again. After 20 min again he woke me up, hey come see the sun.ohhh shit. There is no more chance to rest and I preferred to collect my stuff and leave. After having some scrambles eggs and a very sweet coffee( I couldn’t take it due to its sweet ) I began to hit the road again, but my mind was busy with what I saw in his home and his family house. I saw them how they are poor and have nothing and many questions in my mind. My mind was completely hanged and sad.

The beautiful road and landscape made me fresh again and helped me to recover myself and enjoy again. Tonight also I stopped somewhere and people living there invited me for dinner and gave me a plug to use of my PC. I am so tired and I have to sleep behalf of last night as well……good night