Last week of cycling through Switzerland 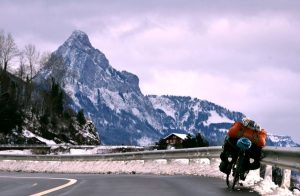 After I came back to Switzerland, I had to prepare for the association. I had to organize for the meeting. I had to meet with Marcia and Roland in Geneva to t

alk more about association. Also, I had another school in Biel-Biene, meeting some people in Biel-Biene as well and also 2 of my friends were going to support me in association regarding to sign bicycle touring to Iran to make some financial support for the association. I had a quite busy schedule when I was in Switzerland. First when I went to Bern, The first thing that I had to do in Bern was just opening the bank account in Switzerland because I had always difficulty to transfer money, to receive money or keep my bank accountant in my old account in Austria.
I realized it is better to do it in Switzerland. It was more expensive but still I was more able to communicate in the bank accountant. I could use it much easier. After I have done it, I had to go to Geneva to meet Marcia and Ran but the night before I had an invitation Biel-Biene for dinner. I went there to meet Yaser and I stayed there over night. The next day I did hitchhike to Geneva. It was quite fun. It was about 170kms from Biel-Biene To Geneva. I changed 4 times for the car.it was fantastic to meet so many different people to just chat and talk all the way to Geneva. The first people who gave me a lift were a mother and her son with the small car. They stopped for me. They took me from Biel-Biene to Neuchatel. They were French and they couldn’t speak English almost at all. I had some documents in French in my mobile. I showed them. It was starting point to communicate and the boy keep translating by Google translate to communicate with each other. When we arrived in Neuchatel,They asked :Do u have some time?Isaid:ok, I have

Again I stopped and waited on the road in the end of Neuchatel next to the petrol station. It was funny because I was in the exit of a petrol station and any car which was going out of the petrol station felt a kind of responsible or a kind of guilty to give me lift. Almost all of them apologized that they couldn’t take me! After a short while, I got another lift to another city. He was a teacher. When he dropped me, he said: if you didn’t find any lift, just call me. I will be back or try sth to do for you and he said that he may speak with the principle for visiting the school if I want and  …we said goodbye.

From Lausanne, a guy from Yemen picked me. He lived in Geneva. Again we had a lot of conversation. I arrived in Geneva and I directly went home. Marcia had organized a meeting in the restaurant that night to have fondue. This is a very nice food with the lots of very nice cheese. The restaurant was fully packed and there was no space to sit there. It was weekday and the restaurant was packed. We talked to the owner of the restaurant and said: sorry we don’t have a place and Marcia said: this guy is travelling and just come here to have fondue here. He said: ok we can just set a table next to the kitchen. Marcia told me: listen! There is a possibility of sitting next to the kitchen. It means there is no ambiance but there is fondue. If you want to have ambiance, we have to go to different restaurant but there is no fondue. I said: I prepared to have fondue. I don’t care about ambiance. Now I am here and I want to have just fondue.

The next two days, on Saturday and Sunday, I stayed at home and mostly talked to Marcia and Ron about the association, about how to organize it, how to plan it and…on Monday I left Geneva by train to Lausanne to meet another two friends and then on Tuesday I hitchhike to Bern. There was a French guy who was travelling and he took me to the city center in Bern. Then I had to finish my work in Bern to open a bank account for the association, to visit immigration office for visa and …

On Wednesday, I was planning to go to Belle. On Thursday morning, I had a school there. The person I was going to meet from Olten and there was supposed to drive down to Belle to meet called me and said: Mohammad I can’t make it today and we can’t make it tomorrow. If you want, we can make it tomorrow. But Friday was too late for me. I had to go to Lucerne on Thursday. The only way I had was just packed in an hour quickly and cycled to Belle in the evening of Wednesday. I arrived at 11 to Olten. I went to Roberto ‘ house and Adina was there as well. We started talking. I had time for 2 hours. We have just talked. It was the first time I was meeting Adina but we just talked 2 hours interruptedly. It was about association. we are planning to organize some bicycle tours. We will start from Iran.

We were disgusting about that subject. It was about 2 that I left Olten. It was snowing and then beginning to rain. It was cold and windy. I had to cycle 60 kms to Lucerne. I arrived 6 in the evening to Lucerne and then again I talked a lot about the association with Margareta and Louis. I offered Louis to become board member because he and Margareta were the first people who support the project. They sent me the first donation that I could start the project. It was a kind of honor of me and I have them in my project in the association. So,We talked almost only evening then in the morning I had to leave. Margareta asked me to stay longer and I loved to

stay longer too but the problem was I had to meet Claus on Friday because on Saturday and Sunday he didn’t have work and I loved to spend time with him. It was the only time I could spend with the whole family. I started cycling from Lucerne to Frastanz in Austria. I knew I can’t do it in one day.  So I think it was a last 30 kms that I called Claus and said him that it was late and dark and I couldn’t cycle anymore. When I arrived to walensee, there is a little town and then from there I could go through the bicycle path. The bicycle was not clear. For the first kilometer, I had to push my bike through the snow .it took me 1 hour and 15 minutes. It was not possible to continue. I found a parking lot and stopped there and sent a text message to Claus: I am here in parking lot and no way to continue. I just wait for you. After while he was there, he picked me and we went to ??.I was so lucky because if I was there 2 weeks before, there was no snow there and I couldn’t sky but last week it was always snowing and there were lot of snow in mountain. The first day, on Saturday, we went skiing then in the evening also we went skiing at night on lights.but in the morning when I was skiing  I was falling downall the time, it was h

more about skiing. On Sunday morning we went for skiing for other places. In Sunday evening also we had a family gathering. We sat and talked. It was very nice to be with a family. In that moment I felt I was a part of their family. I know the parents, I know Claus, Clemens, girls,..I know everybody of the family, the father, the mother, Claus’s sister, the daughters …I was exactly like their relatives and a part of that family. They were so kind to me and open.  When we were talking in the evening around the table with Claus’s parents and also her partner, I really felt I was in my home. It was like a my own family. It was a beautiful and amazing feeling. Thanks Claus for everything.

So it was my week and t

hen I had to leave to continue my journey in Austria. I will talk about it next episode. For now, enjoy, enjoy and enjoy.