Last day in Kazakhstan in prison !!!! 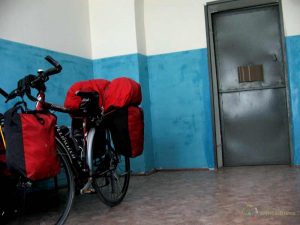 The road was fine, a highway which was big enough to feel safe cycling over night. I was cycling and each 2 hours I had a short stop to have some rest and having internet on my mobile was good enough to keep updating my FB. it was completely dark and weather was really cool, so good to cycle then. I was passing a house which people were selling some traditional drink made by milk product. The lady called me to stop and have some. It was almost my last chance to have more some kind of drinks so I just stopped. But when I was asked her how much I should pay she just said no need to pay. It is a gift from us to you!!! That’s why I keep saying I love Kazakh people, they are really nice and hospitable. I had another stop at 11:30 to have a tea and then at 12 I had my last stop while I was passing a wedding party. I asked people to see their wedding and they kindly allowed me to go in and see Kazakh wedding party. Of course it can’t be real Kazakh wedding because the place is close to Uzbekistan and life style is very influenced by their culture as well but anyway still it was something new for me. at around 1am there was some kind of shops and some cars stop there to buy stuff. There was a car driving in the wrong direction and he drove very fast toward me. I yelled at him and he was just about to hit me. I moved very quickly out of the road and he passed very close to me, I had to escape before I get hit and it caused me fell down. I knew he is drunk and I was so angry. I used all bad words and slangs I know in English and Persian ( fortunately still I don’t know any in Spanish, I just know one which I had enough to use from those 2 languages, so I didn’t need that one). I began to cycle again while I was still angry and a bit stressed. I was feeling they may follow me and do something crazy because I have to support here and they were drunk. I was a bit careful and kept looking back every now and then to see if there is a car following or not. after 6-7 km I saw a car driving close to me, honestly I was a bit scared. He could just hit me and drive away. He was driving slowly behind me for 4-500m and then he shouted at me. He was yelling telling me something I could not understand. I stopped and the car also stopped beside me and somehow blocked my way. Driver came out companied with another one from back seat. Driver asked him to go back to his seat. I was almost ready for a fight even though I knew I will not succeed in any fight with those 5 drunks. I tried to keep my courage and be patient. Driver came and he start saying “sorry” . he apologized me for many times and kept saying he was not mean to do that. He was drunk but honestly I felt a bit embarrassed for all those bad words I used. He shakes hands with me and then I began to cycle while he was escorting me for 10km giving me light. I was absolutely confused the way he treated me. 10km he stopped and told me he has to turn and he gave me some water to drink and he signed my flag. He is the first one I allow to sign my flag and I did it to remember I should never use bad words again and I should even never judge people even though they do something that crazy. I finished cycling around 4am and I left just 20km to the border for the next day. 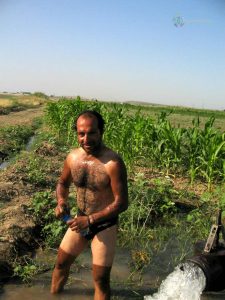 I was thinking of finding a place to have a nap near water, so I could wash my body next morning and change my cloths. it was totally dark and hard to see, for 6km I was searching in dark. I was even happy to find a tree I could sleep under for few hours but I couldn’t find any place. Suddenly I saw a small shelter off the road and I went there. I saw few people are sleeping there in a small room under that shelter. I didn’t use my sleeping bag neither my tent. 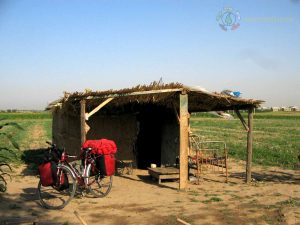 I just lied my under tent mattress on the ground and I took some kind of woolen carpet in that place and I lied there. It was a bit cold and I grabbed my plastic mattress around my body. Not very comfortable situation, so I didn’t sleep well. Just in the morning when Sun rose I could have some sleep when I had some heat on my body and that place was a Melon field with a big pump sucking water from the ground, so I had water to take shower in the morning, of course a cold shower.

being captured in prison!!

After having breakfast with guys there I cycled to the border and my story began. I went to the border and I gave my passport to check. The guy looked at my passport which was over for 7 days. He called some other person and after they talked to each other for a while he asked me to follow him. I was thinking “ ok, he is taking me to his boss office, then I can talk to him and I maybe have to pay some penalty and go” but I was absolutely wrong. He took me to a temporary prison !!! I was shocked. They put me in and began to talk which I could understand nothing. I was so lucky there was a guy from Samarkand who could speak Farsi and he was translating for me. A bit later on I understood they will send me to a curt and judge will decide what to do with me. some friends called me and even they called me from ministry of education and they called some people from different places but at last they told me no worry Mohammad, they will let you go and you just need to pay 400$ fine!!!! Which 150$ was the only money I had. I was there and they were talking which I could understand nothing…every few min I asked them what I should do and I had one answer “sot” later on I found what Sot does mean. It means Judge and I knew they are going to send me to the curt. It was still 11 and they would send me at 5-6pm, so I should stay in jail till then. Around 1pm they sent me to a bigger jail with some room 4 bed each. The guy from Samarkand finished his work but he companied me to help for translating. I was in the room waiting for them but at least I had my cell phone with me I could use internet or talk to my friends. I was trying to stay calm but in the other side I knew in Kazakhstan everything works slowly and they may tell me tomorrow and it was my last day I could enter Uzbekistan to save my 3 days of visa and I was not happy to lose it. Finally at 6pm they sent me with some more people in a car escorted with some solders to the curt. At first the guy there told me my translator has no document, so he can’t translate and I had to find a verified one!! Which seemed silly to me? Amir (my friend from Samarkand) was about to give up but I went inside again and showed them my documents. It was so funny that almost all those guys when they saw my documents they told me that they saw me in Kazakh national TV and now they could see me in prison but at least they were kind enough to me even they wanted to take a picture with me.!!! You can imagine how I would feel in prison when the solder wants to take a picture with me!! Anyway finally I could convince them to bring Amir as a translator to the curt and we went in. for the first time in my life I was in curt, I had to stand up when the beautiful judge entered. It was good at least the judge is a female and not male. They are more kind than men and more easy to negotiate (of course not in every circumstances..But in this case I prefer to have a female judge). She read my profile and began to say something and Amir was telling her something as well but I felt that it is not enough and I had to talk myself. I went close to her desk and explain my situation and I showed her my documents and after few min she decided to let me go…!! Ooh my GOD I could be free without paying anything but solders kept playing psychologically with my mood to break me down, then I might be happy to pay some money to get rid of that situation but I already knew that I am fine. He told me I have to go back to Chimkent to get another visa and I told him ok give me my passport I want to do it now even I knew it is not right. Finally they gave up and they sent me to the border by a car and still again in passport control they kept me for 10min, but I was fine enough and the only thing I was concern about was time which I didn’t want to go to Tashkent late at night because I was not feeling good to call my host late at night. I felt it is so impolite to call them very late. But I was in their house around 11 in Tashkent….I was free but very tired and just wanted to sleep.