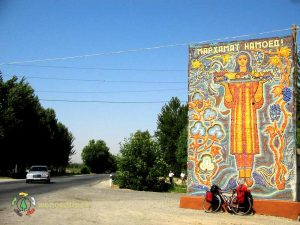 Salam…a very familiar word I would ever can hear …it was the very first word I heard in Tajikistan while border crossing.

I was in Tajikistan, where people speak Tajik which is almost the same language Persian countries speak with a little bit difference, here the language is much under influence of Russian and many Russian words in their language but still easy to understand and communicate. It was very hot and I had 90km to Khojand, but I was already enough tired and there was a lake ahead on the way to Khojand which I was going to stay overnight by the lake. Tiredness didn’t allowed me to cycle fast and heat as well …I just wanted to sleep and get rid of heat.Finally I 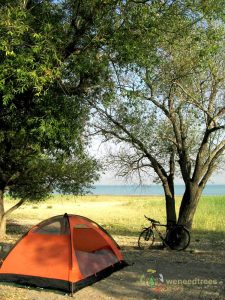 found a place I could camp under shade close to the lake but it was absolutely hot. every 2-3 hours I had to jump into the water to cool down, anyway water was really cool and nice. 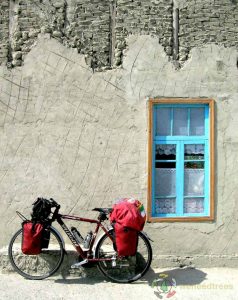 the next day I cycled to Khojand which is an old city but not very intresting for me when in was that hot..I couldn’t stand under that heat and I just wanted to have a place to stay and a room under cooler. I followed the first man I asked him the address for a hotel and he took me to a very common hotel in Khojand..they gave me a room which was not quite bad but hot!!! AC was not working and they offered me a room in 7th floor but the lift was not working, so I just preferred to stay in that hot room but do not bringing all my stuff in 7th floor. I would like to stay in Khojand another day but the hard situation I had made me decides just to leave. I was cycling again in a flat road like desert. I had not much courage to cycle in that situation, especially when I had no pressure to cycle fast because I had enough time in Tajikistan, so I didn’t cycle very much that day. I stopped after 70km. I found a very nice spot and some small rooms I could stay overnight, so I decided to stay there at night. Next day was my birthday…I was alone middle of nowhere. I remembered 3 years ago when I was in Australia in 2008. I cycled 310km on 14th of July just to reach Melbourne on 15th to celebrate my birthday with my friend but here even if I would cycle to Dushanbe still I had no one there. So there was no need to cycle that much or push myself. It seemed that I had to celebrate it alone but I didn’t know what is going to happen. I wont be alone…mother earth ”Nature” would give me its gift as always it does and GOD wont leave me alone. 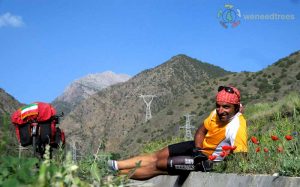 I had my coffee in the morning and began to cycle in a beautiful road. For me it was a gift to cycle in a road where there were a lot of flowers and still I could see poppies even in 15th of July. I was so happy and fresh…laughing, smiling and sometime shouting my joy or singing for myself…I was totally mad. 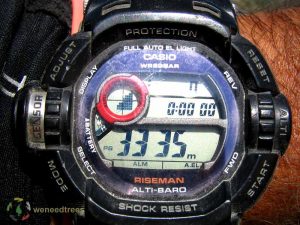 after 25km I reached the foot of a big climb…I had to climb up to 3400m but the road was not fine. It was dirt road and very hard to cycle even if it was flat and a lot of cars passing by and giving me huge dust …finally I reached to the pass tired and a dirty. even descending was the same hard as it was while climbing. Because of the bad quality of road I couldn’t cycle fast and I should be careful…the result of that tough road was broken carrier. I was cycling in a downhill for almost 30km and then cycling through a beautiful canyon along the river. It was like a corridor in haven… 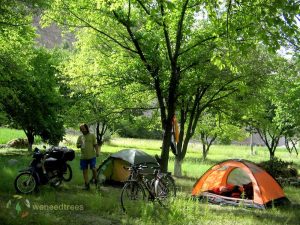 I was about finding a

place to camp.I enough enjoyed my birthday in that beautiful road but still I could have more and I could enjoy more, just I needed a company!! A motorbike was passing and he stopped. He was Einct from Switzerland who was traveling by a scooter from Switzerland to…?( he didn’t know himself). After some very common questions I asked him where is he off to? He replied” I am looking for a nice spot to camp… 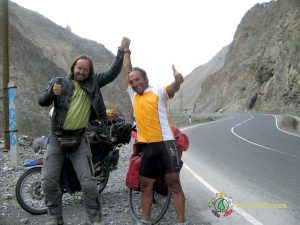 today is my birthday and I want to celebrate it”..wow.!!!
I t was amazing. Now I had a company just at the end of the day who is also was going to celebrate his birthday. Such a beautiful coincidence happened. He left me to cycle faster to find a nice spot and I followed him. Finally we ended in a Apricot’s orchard and we camped there under Apricot tree.

….. I think this journal is so boring because I am not writing it while I am fresh. So let continue later when I am fresh. This way of writing is just boring..I know that.