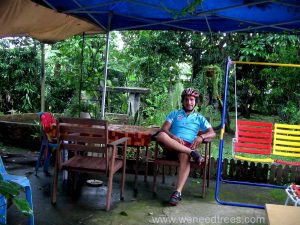 I left Sibu in a very nice day. It was rainy that morning but soon after I started cycling the rain stopped. There was about 440km to Miri and 500km to Kuala Berlait in Brunei which was my next destination and there was no desire to stop on between except overnights stops.

I was a quite confused and I had such a strange feeling when I left Sibu, it seems that I lost my energy and even I had 2 days full rest but still my body was not fresh and I was just pushing myself to continue. Between Sibu and Miri there is another town called Bintulu which almost on the half way. I cycled on the first day about 125km and that number was the number came through my mind from the morning. When I arrived to Sarawak I was looking for a chance to visit the Longhouse and stay overnight there and meet Iban people and the other thing I was very interested in was having a bout journey to the forest through the rivers in Sarawak but no plan fro that and no information how to do that.

There was many of long houses along the way and I stopped by one of them to capture some video by my hp, so I was one step closer to my wish which was visiting long houses.

It was about km of 105 that I passed through a very nice and very long, longhouse with a very smiling people, they waves their hand and shouted on me Hi… it was such a demand to stay there over night and I was going to stop and ask them to allow me to have rest over night in their house.

I looked at my bicycle computer…still 105 km and I had more 20km to go to reach my number. I was struggling myself and kept saying myself “ hey this is a very good chance to visit longhouse and stay there at night, they are very friendly and they already trying to make a friendship, so it would be very easy to stay here…don’t lose the chance ” but still more 20km to go and I just saw that I don’t have a very strong feeling to stay there. So I just passed over and cycled off.

It was 124.80 km that I saw a guy side the road and a very small longhouse nearby. I stopped and asked them “ can I stay here over night? “ and they kindly told me yes. It was a very small one and just 5 rooms but the one I already passed was about 30 rooms and very nice and beautiful. I was thinking I should stay there but there was something nice to come. I stayed there overnight and we had a chat and I ate with the people there which was so fun. At night brother of the man I was staying in his room came over and we talked a bit about Iban`s culture and their customs and I told him I would like to have a boat ride and showed him the map.

It was fantastic but there was a small problem. Boat was leaving at 1pm and I had 100km to ride so it was a bit hard to reach there by the time but the man told me he can take me there. 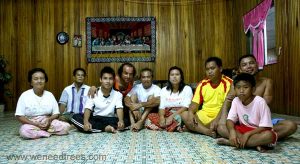 ” Longhouse in Bynio and the family I stayed with them “

In the morning I was thinking ok, I will follow him and he will take me to Bintulu and then I will take a boat but in the morning I saw his car was full of people so!!! I started cycling and after about 60km I found that I cant reach to Bintulu and just I have to hitchhike. I sat sie the road and just after 10 min one car stopped by and I Philip ( the guy who wants me to stay in their longhouse in the river) his car was empty andhe already dropped his passengers, so I just put my bicycle in his car and we drove to Bintulu. He took me directly to the boat and asked the driver to drop me in front of his longhouse.

A very long and fast boat in a very vast and beautiful river….my dream was getting true and I was very excited. It was a very nice river and even I saw Crocodile in that river which was fantastic.

I arrived to the Longhouse in the afternoon and just went there and showed them the paper Philip was handed to me and they kindly let me in so my new experience from Longhouse was begun.

At first introducing myself to the people and discovering the house which was so beautiful and so long. The house was in the middle of forest and they had their own solar panel. They were totally self sufficient which was very nice to see how they are living in a very nice way and how their life is healthy. I met Robinson a 17 years old guy who shoed me all around the house and after that he took me to his small boat to show me their primary school was a bit far from their house and we had a short boat ride at night in the river which was just amazing.

I asked him to switch off the engine and it was just quiet and just sound of bugs, frogs and birds and for sure winds on the trees branches.

I asked him about Crocodile and their danger fro people but his answer really surprised me. He told me “ if you don’t disturb them they would care about you. We swim in this river and also we take shower on the river. As long as you don’t touch them they wouldn’t touch you. Just don’t make them angry they are friendly” his attitude was so true ..it was a consequence of life in the nature.

In some ways I envy him and his life which is such a dream for me.

Anyway the boat fro Bintulu was leaving 5am and I woke up at 4. Robinsons grandfather who I stayed in his room woke me up and he told me it is rainy so I will take you to the boat. I put my bicycles and bags in his little boat and we ride to the express boat in dark. It was still totally dark that I jumped on the express boat waiting fro them to start the journey back to Bintulu.

At about 8:30 I was again on the road. After having breakfast in Sibuah which is on the way to Bintulu I changed my clothes and started cycling again for Miri. I decided to cycle about 140km and just leave 100 for the last day before Brunei.

Last night I had a very short sleep after a long day so my body couldn’t recover very well and I was feeling tiredness. I had some little rain in that day. After 100km the road was split to 2 different road that I was interested to take the one near the sea . I followed my map but it was really confusing. Unfortunately the signboards in Sarawak are really bad and even sometimes there is no signboards in junctions and hard to decide where to go.

Anyway after I lost my way 2 times one guy helped me to find my way to Miri through the seaside road. it was almost dark and I had cycled 140km and no place to stay. There was all palm plantation and no where to stay. Finally I found a small longhouse and I asked them for staying overnight and after an hour I had a shower and a bed to sleep. I was really tried and sleepy and I just died.

” Longhouse along the way “

The only thing I can mention about that longhouse was my host who a 88 years old man who has just a skin and some bone. He was so thin but still enough strong towalk on his legs and do his work. He could speak English very well and I had someone to talk for a while. I am fascinated by Iban`s hospitality. I woke up early morning and left there about 7am fro Miri and I was not going to stay in Miri. Just I needed to stop in Miri fro having lunch and check my email to see if I received any email from Sue who I was going to stay with in KB.

I got her email but it was from 2 days ago and I just left her a short comment informing her that I will be in KB by today and will check my email in KB when I am there. I had a light lunch and just some bread due to the last night my stomach got upset and I made myself vomit at midnight to make my stomach more lighter otherwise I couldn’t sleep. I think I had some not good food along the way and also it was very hot and the heat may cause the problem. I was not feeling good and I even didnt eat till 12am when I was really hungry. Still I was feeling tired and not much energy to continue but no choice . my days in Sarawak are counting down and I have to push myself when I need.

I arrived to Kb about 5:30 and followed the way to the city which is just 2 small streets.

Paul who is a Canadian guy I met on his motorbike in Sarawak was emailed me sharing his number. So we could have a coffee. I sent him a text and we pointed an appointment at 7 pm to have a coffee where I met him again with his wife.

Received an email from Sue, so I had a very nice and comfortable place to stay in Kb which is so good.

I am here in KB now and going to go out and have a look around the city and its beaches.