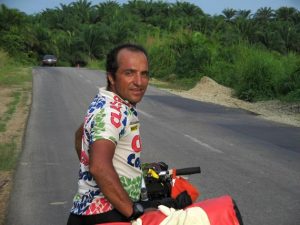 After 2 days staying in Melaka I left it to Indonesia on Wednesday morning.

On the last night in Melaka I met 2 guys from Australia staying in the same guest house as me and we talked a lot about traveling and our philosophy of our traveling. In that night I was supposed to work and write some article for my website and also one for a magazine in Poland but just I looked at my watch and saw it is almost 2 in the morning.

I had to box my bags due to the boat was leaving at 10 in the morning and it was better to box them at night. So I went to the bed about 3 in the morning and had no good sleep, I was thinking about Indonesia and new experiences in a new country, I was excited as always I am when I am going to enter the new country.

In the morning Peter and Alex( the Australian guys ) came to my room to have a breakfast together and just after that I left the guesthouse to the ferry terminal and after an hour I was on the middle of nowhere and just everywhere was water.

After 2 Hours sealing boat dropped me in a town called Dumai and it was the beginning of traveling in Indonesia.

It was rainy. I changed my clothes in the toilet and after a short chat with an Indonesian guy I jumped on my beloved bicycle and began to hit the road….

My new story is going to start, and my life is going to find another part of itself in the other side of planet. It was about 13pm that I found myself on the road ahead to Pekanbahru. The road was full on whole and water inside and every car which was passing through splashed water to me. I got few times shower with muddy and dirty water.

After about 15km the road became better, but it was still very narrow and so busy. Too many truck and cars and there was no side road to escape. Just I did it by the hope that GOD will protect me, otherwise there was no hope to finish the road.

I was so tired due to last night I had no good sleep and it made me really tired, so I couldn’t cycle more than 55km and after that I was looking for a place to stay.

Indonesia is a Muslim country and there is too many mosques, so it is easy for a Muslim to find a place to sleep at night.

Still was rainy and I found a mosque, I asked them to allow me to stay there at night, but the couldn’t speak English and after half an hour they showed me a hotel. Ohhh no. just I lost the time and again cycling anther rain to find another mosque. I found another mosque very soon and just I went there to stay. They invited me to stay in their room and everything was getting nice.

As always many children surrounded me and there was no word to communicate. I was too tired and just having something for dinner, I lied as death. I woke up early in the morning and after I cleaned my chain which was full of sand, I began to cycle again. whatever that I cycled more, the road was getting more nicer, but still narrow and busy. there was 150km to Pekanbahru and I thought myself that I have to do it by 2 days, but after cycling about 100km, I found that if I cycle well I can do it by the same day and I can save a day. So just I cycled all the day. My speed meter showed that I did activity for 10 hours and it was good for the first days cycling after not having cycling for a long time. after 120km I saw a sign board for Pekanbahru and the other side of road and in the opposite there was the same board …Pekanbahru and a red line on it.!!!! What I am arrived.!!! I became very happy. Distance was 25km less than I expected. Woooow so nice. But it was just a signboard in the middle of nowhere and I cycled exactly 25km more to Pekanbahru.

I new nothing about the town. From 7months before I left every guidebook and information away and just I am following my heart. So just I rode around for a short time and I found a hotel with a reasonable price. I got a room and took a shower, now it was the time to feed myself. I decided to go out and eat and after that come back to the room and work, but I found a very small local place for eating and I got a sit and ordered a meal.

I met the first Indonesian guy who could speak well. That’s why I left there after 2hours. so I had no more time to work and just I needed to lie and close my eyes.

I looked at my watch, it was about 8am…I need one more hour to sleep and again I closed my eyes. after that just I made a breakfast, ate that and began to work…

My room has no window and is a good place to concentrate to writing.