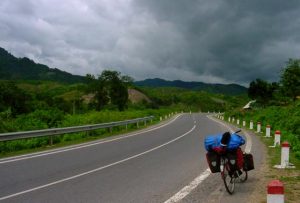 I stayed in a small village just after border and there was no any access to the internet and almost no connection to other places for me. So I preferred to leave there by following day, it is true that I needed more rest after Vietnam but there was no reason to stay, no good food and anything else, so I had to cycle 240km to reach to the first city which was Savannakhet, and cycle all along the way from east to the west, so I knew that I will face with front wind all the way, due to the wind is almost always from west to east and I had to cycle in opposite direction. I divided that to the two days each 120 km to cycle. I woke up early morning about 5 and after having small breakfast I left the village in a very nice and beautiful road which has no more traffic.