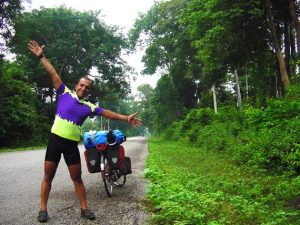 I staid 3 days in Savannakhet, I had a comfortable room, which was in reasonable price and a wonderful Thai restaurant just 100 M far from the guest house and totally it was a nice place to rest and recover. It was good time to fix my bicycle which was breaking down after almost 2000km and cycling for a long time under rain, rain is most harmful thing for bicycle and just it ruin everything. Also I had to write some article for a magazine in Poland and some for my website and I had certain time to do all those works. So actually I decided to leave there on the second day, but I preferred to stay one more day and do more, and finally after 3 complete days I left there to Vientian which was about 470 km from there.

Let explain Savannakhet and see how it is, Savannakhet is a very small city and also one of biggest city in Lao, but very empty and no more population living there, the population of Lao is about 5.5 million and it shows that how the country is quit and no more traffic and noise. Everything is slow and people are really relax, I was leaving there on Monday which is the first day of week, but I felt that it is holiday, everyday is like holiday and you think it is weekend. So quit and from the end to the first of city is just 10min on bicycle.

Ok I left there about 9 am and I had to cycle 30 km back to the same road, due to the city is not on the way to Vientian and I had to come back to the main road. But fortunately I had wind from behind and whatever that it was difficult on the way to Savannakhet, now it was easy and I really was enjoying cycling in that nice road. Weather was like everyday, cloudy and some time a light rain and very cool. Just after I arrived to the main road, I found that the good asphalt has finished and I had to ride in a road that its asphalt was so so and not very good. I think the road from border to Savannakhet which has a wonderful asphalt is due to it is transit road between however it was ok and the road was enough nice to cycle and I dont complain at all. After cycling in Vietnamese roads which have busy traffic and noisy, here was paradise for me. Each 30 min one car and no more motor bike and bus and also people, just once a while a small village and like the other country in this area many kids who say Sabadi ( Hello in Lao language) and I gave them all sign, it is funny due to some time I can not see any kid, but I here Sabadi from where ???? and just I answer and hold my hand up and shake it for a person who is invisible.

People are wonderful and very polite in Lao, they are really warm and nice, I really like them. In Vietnam also people were very warm and nice, and I have to clime that in south east Asia, I saw the Vietnamese most hospitalable people. I cycled through a empty road which is just green, full of trees and bushes. The forests in Lao are more pure than other countries in S.E.Asia, and people destroy them less than other people in other countries and it is wonderful. Even I saw that whenever that they cut the trees, they are reforesting and it is really respectful. It was a simple day and I did not any thing special and just cycling and in the afternoon, after 135km cycling I arrived to a town called Thakhek, just I went to find a room and after having dinner I slept very early, I was very tired. I supposed to wake up early and start cycling before 6 am , but when I woke up it was rainy and heavy rain was a reason to sleep till 8. I was not in rush and no necessary to push myself and cycling under rain. It was about 9 that rain became light and I loaded my bicycle and began to cycle ahead on the road No 13. I had almost 340 km to Vientian and I saw that if I do it by 3 days I will arrive there on Friday and I will face with 2 days holiday and nothing to do, so I though tit is better to cycle slowly and make it longer and enjoy of quit and beautiful road. All the way sound of birds and frogs were a very nice natural music and good to listen and enjoy. For a few times I stopped and sat somewhere and just relax I lied on the ground it was wonderful. So I didnt cycle very much and just 105km in that day, almost about 5;30 I arrived to a big village and I found a good room, now I am on the room and writing this article.

This is so weird to spend nearly  7 months only for a visitor visa to go to Switzerland to do my job for the Association. I still cant understand why I should wait so long for a visa while I have visited Europe many times and I never had any problem getting visa, but this time !! strangely they keep me waiting.
Time supposed to be gold and so important but it seems that my time has no value which is not fare. for last 7 months I never could plan anything even for one month and I was standby all the time, even I was packed and in one part of this tiring process I bought my flight. Of course as a traveler I try to buy the cheapest flight and it was non-refundable and I lost my flight even though I had the authorisation code for the visa.
Anyway, it seems that I still have to wait, but the good part is that I started learning Spanish while waiting and training as well as visiting schools and fixing some bugs of the Association’s website. I cant start our official work before I go to Switzerland to provide our educational materials with MArcia Banks.