Workshop and tree planting in Beijing 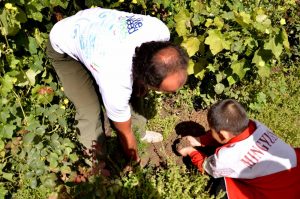 One of the most important things I should have organized before I arrive to Beijing was to find a school for my project.  I didn’t have many contacts here in Beijing and my only Chinese friends was away in holiday, so I wrote to Eve, my Swiss friend who I was going to stay in her apartment.
I knew Eve since I Was in China last time going back to February 2009. In that time also she was hosting me.
I wrote her and asked her for any possible contacts for schools. In the other hand October holidays were just on the corner and I wouldn’t have much time to organize many schools.
after she wrote me back some email addresses and also websites for international, British and some other schools I found a link to a kind of NGO who are supporting children who has no access to public schools in Beijing.  Here is the link to their NGO : http://www.mcfchina.org/

I just wrote an email to Helen who I already had an email from her. In a few minutes I received a call from Helen after I sent the email which was surprising. We discussed about the project and she agreed to organize a school where they go for some volunteer works. 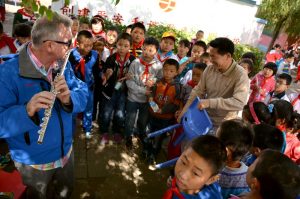 On December 23th I took a subway and then a taxi to get to the address Helen has given to me.  it was a bit south of Beijing and for sure not a rich area and I knew kids wouldn’t be very well educated as they also don’t have much access to the public educational services in China.
It was very clear which would be hard to keep them quiet and make them sit down during the session. they were too playful and crazy but of course lovely.
we talked a little bit and I showed them my pictures and then we began to talk about  trees, so I asked them what trees does for the nature and I got the first answer : they clean the air.. ok then the next one?  -they stop storm … ok then, the next one? And I got the same answers almost from everyone. It was a kind of competition to give the same answer.
Then I showed them the trailer of Midway which is very shocking movie about garbage in Midway island. It shows how birds die after eating plastics and not being able to digest them. 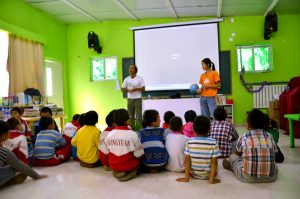 In China throwing garbage is one of the biggest problems along with all other environmental problems they have and I tried to focus on this subject. I showed them how birds die and I asked them if they like the birds die? As they were too playful and naughty, they answered YES loudly!! Ohhhh NO!!! please
It was just a small group of kids, but it could show the deepness of problem here in China which is the most populated country and also the second polluter in the world after USA.
It needs a lot of educational work, bringing modern culture along modernity to the people’s life and providing fundamental basements to develop the country in a sustainable way.
Anyway I am very grateful for Helen who organized it and helped me to get there and she also donated 2 little trees to plant with kids. 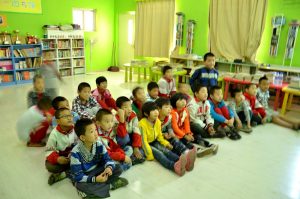 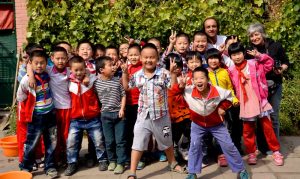