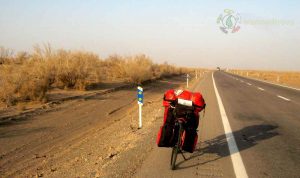 I began to start a NGO for “weneedtrees” which has been some kind of my aim before I start this project. It is not easy at all to organize a team specially when I am not there all the rime but fortunately I could find some responsible people who I can trust on their work and their concern for mother earth.

But still was not enough to keep me alive, I cant stay somewhere that long even though I was doing something, my soul was in prison, and I was not that much happy which I am expecting myself.
I already had lost the season to be back in China nor Tajikistan, and I had to just wait for winter to pass…not a pleasant decision.
almost 10 days ago I went to visit a friend…I was in her house which I suddenly got an idea to cycle through Iran down to Persian golf while I have to wait for winter.
That small spark was enough to make me move. I left 4 days time form myself due to I was going to spend Yalda at home ( Yalda is the longest night of the year which Persian celebrate it with family ).
It Was Thursday and it was the time I was supposed to leave but cycling last few days in a very cold weather ( something like minus 7-9) had made me feel flu. At the morning I felt cold and weather still was too cold. The temperature was not important but having cold was something I couldn’t ignore it.
I had to rest and the next day also the same. I didn’t want to wait more, so I asked my friend to inject a dexamethazon and finally on Saturday I was ready to leave.
still I had something to be done before I leave, so it took me few hours to do them and I the city at around 13:30 which is quite late.
days are too short in winter and it is hard to cycle a long distance. Usually I don’t take lunch and I just cycle as much as I can.
First day I just cycled 55km and I camped behind a hill out of see.  It was a quiet place but of course cold at night.
finally after such a long time I was again alone in my tent, again in a bicycle trip, again in the nature and in peace. It seems that I am again living my dream and my inside kid was so happy playing and I was cheerful of that beautiful moments.
I camped at around 4:30….a very long night ahead. Almost 16 hours I should stay there alone till next morning before I could cycle again.
It was around 10 pm which my mountaineering trainer called me, he told me which he will come to have breakfast together next morning but honestly I dint think he will do that. 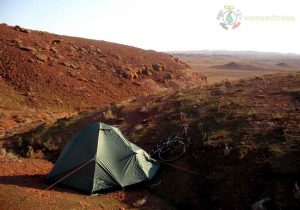 My first cam in Iran

In the morning I was almost ready to leave that Hossein Amani ( my trainer ) called me, he was close !!! I was really surprised. He drove 60km to have breakfast together which made me feel amazing.
He came and we talked and talked… I was thinking that we didn’t spend that much time while I was at home in the same city, we were quite close and we could meet so easy but now, it took him almost 4 hours for a round trip and breakfast but he did it. Always I have been asking myself why?  What can make people do effort for their friends, others or so?
The answer was absolutely clear….now I was living my dream and I was doing the right job, what people have respect for. I have learnt how important is to live our dream and how much respect people would have for !!!
we separated at around 12 and I continued toward Torbat. Road was almost flat but wind !!! I had a very strong head wind.
I arrived Torbat at 4pm and directly a friend ( Mr Hamed Hijizadeh) send me to the dormitory. After a short rest I went to sauna and then I had some kind of interview  with Mr Hajizadeh.
From Torbat I knew the road is just flat for next 220km. but again wind !!! again I had a very strong head wind. I was expecting to reach Gonabad ( a city 120km from Torbat ) but I couldn’t make it.
It has been for a long time I haven’t cycled and I was training just at gym, my muscles were not obeying well and I am not fit yet on bicycle.
35km before Gonabad there was a Telecommunication post, I was passing by that the guard invited me to have a tea with them.
I was actually about to camp and I would like to camp out side in the nature…I was dreaming for camping in desert alone for a long time and now I have that chance. I should appreciate the chance but when the guy invited me I turned left and I went to the station where he already had made a fire.
There was TV what I actually hate and light while I could imagine how it could be nice inside the tent in silence. But people also are part of my journey and I cant ignore them. One of the reason I travel is to meet people and to live with them, so I tried to forget about camping.
I have enough loneliness, so now I can spend sometime with people who like to help and let them help, let them feel good which they are doing something so good and I feel it, I appreciate it and I am also happy.
the next day I left 8:30 in the morning….it seems that I am back to me normal life. I am again enough organized and I know exactly what I am about to do.
weather was so fine, sun shining and no wind but !!!tiredness!!! it was stupid. Everything was fine but I couldn’t cycle…my legs were out of command.
I was expecting to reach the next city called Qaien which was 135km from there.  Road was flat and everything was just perfect except my body !!!
after almost 5 hours still I had cycled 60km !!! no way …
I was about to stay somewhere but thinking of the next day and having that long distance to Qaien was pushing me to cycle a bit more.
I called my friend which I was supposed to meet him in Qaien at night…I told him I cant make it, I am too tired and I wont be able to reach Qaien. He just told me do a little bit more and let me know where are you camping at night.
suddenly I felt  supper power. I came to a challenge with myself.  Staying that long time at home actually brought the level of my courage so down. I began to think that to keep our courage high there is just one way …to have challenges all the time. It is somehow like a training for our mind.
I began to fight with myself and push my body…my body changed amazingly into a very good condition. I was absolutely surprised. Honestly I was not expecting that.
I was thinking if everything goes that well and if I have tail wind in the best situation I can make 120km by 4:30 pm. But it was almost a dream!!! I began to push and to keep my mind silent. I didn’t allow that to talk…I had to make it and the decision was already made.
it was 4:30 and my bicycle computer showed 119.650km. oh my GOD I made it.
It was like a victory, and I was so happy. It seems that I am really back again to the normal life.
I called my friend in Qaien…he asked where are you and my answer was “ just 15km to the center!!” it was totally dark which I arrived to the city. He picked me up and in 5 min I was at home, having tea enjoying  the pain in my legs which were totally cramped.
I stayed at home today to have rest and do my work.
tomorrow I will go to Birjand where my relatives from mother side are living.
28 Dec 2011