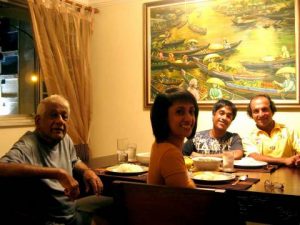 Having dinner with Shakila and her family.

It would be a quite hard to write and explain what I have learnt and what I have experienced in Singapore “Garden city”.I arrived to Singapore at 10am on 15th Dec.
I have sent many requests for accommodation to CS and HC members and no answers just I have got one answer from a Chinese guy, so luckily I had a place to stay there. Singapore is a quite expensive country and I should have accommodation, otherwise I would stay there just fro 2 nights and 2 days is nothing for a country and in the other hand I needed to contact local people and live with them even for a short term.
Just a night before I go to Singapore I received a sms from my host there telling me that he wont be able to put me up there, so I wrote some more messages to CS members and just soon after I received a call from Shakila who is an Indian lady born in Singapore. She told me that she has an Iranian friend in Manchester and just today she had talked to her and then she saw my email. She considered it as a good sign, thas why she just called me due to she was thinking I am not able to access to the internet and I need help. She told me I can stay in her house for a night which was so kind of her.
In the other side my friend Patrina who I staid with her in Adelaide has a friend in Singapore and she had written to her informing I am going to go Singapore and asked her to look after me.
I didn’t expect I can stay with Zunieda and I just thinking of having a coffee and walking around.

Let tell you that Patrina emailed her about 20 days ago and she just answered me a night before I go to Singapore when I didn’t think she will contact me.
Ok…when I crossed the border which is a bridge over the strait I called Shakila informing that I am coming and I asked for the address.
She was at work but her mate was at home expecting me to arrive. Just Shakila told me that tonight her father in low will be cook  and we will have dinner at 6:30 at home… sounds great.

I arrived home at 11 and after a shower I changed my cloths and rode to city to find Red Cross house for getting them involved for my project and planting a tree in Garden city.
The manager was overseas and after I talked with other people I found that they have very tough regulation and it would be a bit hard to plant a tree in Singapore.
However I can a quite understand specially when I cycled around the city and I found it very neat and green and also very clean.
I think they should have all those regulation to keep the city like that.

If I say Singapore was the most clean and neat city I have ever traveled through I am not wrong. I had heard a lot about it and its cleanness and beauty. I think everyone can say the same specially if they drive or cycle along the upper Thomson rd which was my favorite street.
Watch the video…..
I came back after I was a bit disappointed by Red Cross for planting tree. They told me I need permission from EOI and they just plant tree in certain time of year and if I wanna plant a tree I should make donation and the donation is minimum of 150$ !! so it seemed that I have to forget about it but I didn’t like it, I didn’t want to leave the country without planting a tree. I should make it and universe should support me.
I came back home around 5pm and after a shower I sat in balcony drinking lovely Indian tea and Shakla`s father in low and her son were working on the licking basin to fix it.
Shakila came back and we began to talk about our experiences and also about what we think about life and etc.

After dinner we sent her father in low and her son to his house and we came back home. Her another son was at home a 20 years old guy who likes photography and traveling. So we had much to talk about.
It was true that I staid there just one night and we had a very short time to talk and to know each other but I was feeling so close to them and I really was feeling home.
I was planning to go and find a hostel for next 2 nights but before that I called Zuneida to point an appointment and meet her on the next day.
she asked me where I want to go for the next day and I told her I want to find a place first but!!!! She answered me why you don’t come to stay in my sister`s place? It is empty and you can stay there….. What!!!  Yes you can come and stay in her place. you can stay there for 2 nights. that was so nice of her and I was very lucky to have her there. But actually it was not all. I asked her place where about and when she gave me the address I was hocked. Singapore is a quite big city and almost 35km from east to west and 25km from north to south but her place was 5 min walk from where I was staying.

Anyway I moved to her place and luckily she was on leave on that day so we could travel around to visit some part of city and enjoy company of a good friend.
She invited me for dinner in her sisters house. Her sister in low is Lebanese and we had a middle eastern food for dinner what I really miss sometimes.
there were some of her family members around the table which was what I was looking for…staying and living with local people.

They are such a very nice family. After dinner when Nader ( her brother in low ) was sending us home, her sister packed lots of food for me to keep in fridge and have them for the following days and even Jeithon( her another sister ) sent me lots of food on the next day to Zuneida`s place….. oh gash. Those food are enough for 4-5 person. Many different dishes. 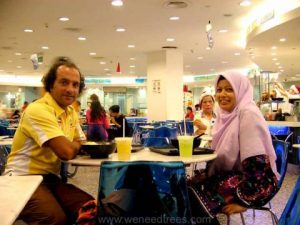 I really cant say how they were kind to me and what they have done for me. I am in the bus heading to KL now and all those memories are coming and makes it hard to leave them, but I have already left and just I am going to miss  them.
I had one more nights to stay there that I received an email from an Iranian student studying in Singapore.
He just came through my website when he was browsing in the internet and it was exactly when I was in Singapore. I called him back and he invited me to meet up on the next day and stay with them.

I met Hossein on the next day and we walked around the Orchard rd and he showed me some shopping mall sand river.
I was walking around that Zuneida contacted me and informed me that she organized a tree planting in one primery school and also an interview with a paper.

She was doing what she could do and it was really great.
Before I move to Hossein`s house I met Shakila and her son for the last time and we had breakfast to gether. They are really nice and lovely people. She was going to fly to India in that day but still she offered me to stay in their house if I need a place to stay. They knew me just fro one day and they were doing like that. That’s way is really hard to leave them

On the last day we went for planting tree with her another sister and her cute kids.

I was going to leave on Saturday and just before I leave I went to her office to have lunch and then I said good bye to Garden city.