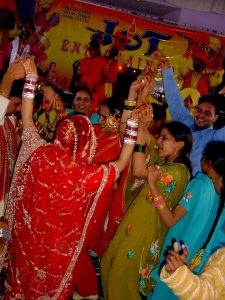 After Ronipur I biked to Chandigahr but very slow and without any horry .a guy invited me to a cup of tea the most thing which I am faing with that on the road and after a few minouts I began again .just 15km befor Chandigahr was a wedding party and I was intrested to see -and also I am – shadi(wedding in Indian language).at first door attendants stoped me but I knew that if I want to see I shouldnt leave there and just after 4minouts 2 guys came and picked me inside and after that I was one of guests . it was very nice ,couple of girls and boys were dancing with loady sound from a huge amplyfier.fortunatly I had some safron with myself and I gave some as a gift to groom for his new life and I should remember that safron in India means happy and it is very nive gift for them and for me that became from south of Khoeasan (land of Safron)it is a chance to introduce my mothers land .the guys were very nice Mavi,Santee and Bahador and someone else which we became very good frinds just by 1 hour. after that they said there is another marige in their vilage and I have to go with them .for me it was great due to as I told I faced with 2days holydays and I had nothing to do in Chandigahr ,so I accepted happyly .and in the other hand it was a chance to visit marige in village .so I put my bike an dloggage in somewhere and went to vilage .again everyone was dancing and everyone was happy. nothing is better than that I see people happy .just I enjoied of their happy and it was great moments for me . in Indian marriges the tables are open and everyone can eat as he/she like and there is many Indian delicus foods.at night I staied in vilage with my frinds and a day after on the morning I left there when a warm family acompanied me to their door with their warm prays.a great mother like mine kissed my head and he asked GOD to protect me on the road .there is nothing on life eccept this and just we have to find them and feel them .even now when I am writing this article and I remember that mother ,I am laghing and feel warm in my heart and calmness. I dont want more from this univers.

After that I continued to Chandigahr but also that was holyday (sonday)and I had nothing to do and as I experianced befor holydays in big city are very boring and always I avoid of being in that situation .so just after a few km in Chandigahr I saw another marrige which was different with some which I had seen befor .I staied to take some picturs that a man pushed me to dance .I dont know dance at all and by that situation dancing with cycling short and helmet ,you can imagin how it was funny.again I had invited to marrige and new friends.

The grooms brother was with me all th etime and he did his best to have a nice memory from the marrige .after marrige he said that he has a guest room and I have to stay there . the room was very dirty and in very populated and noisy place but it was a chance to live very close to poor people and feel that how they are living in a very small room without anything .in this trip nothing is important for me , not food and not theplace of staying .just it is important that I can live near people and with them to learn about their lifestyle. and til now I could do it .