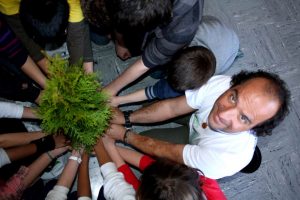 Planting tree and workshop in Collines school in Siron

Last time when I was in Aigle, I sent couple of emails to warmshowers to find a possible place to stay. I stayed there just a night and I didn’t get any respond while I Was there. But later I received an email from Nathalie who was willing to host me, but I was already gone.
Actually I was planning to go back again to meet Paul a friend who I met in Aigle but this time he was not available and I contacted Nathalie. She kindly accepted which I stay her and Nils.
I also asked him to find a school and after 2-3 days there was a school organized in a city nearby called Siron.
On Friday March 15 Nils took me to Siron and I visited Collines school.
we supposed to have a class 1:30min but the students were so good and interested on our topic and we continued 2:20 min nonstop. Even they didn’t have any break neither they went to their gymnastic class which was so surprising for me even though they did not understand English and their teacher has to translate but still they keep asking questions and flourishing their minds. 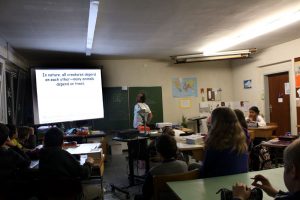 we had a wonderful day together and at last as usual we planted a tree but in a pot.
many thanks to Nathalie and all those lovely pupils who participate and I am sure they are going to do something for our planet.