Home ASIA Georgia On the way back from Kazbeki…. 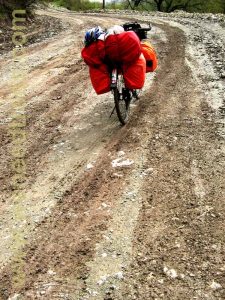 I was in Kazbeki for 2 days and I met many nice people from many different places. Spending all first night with Polish, hiking with Michel the American guy second day and having talk with Julian and Ann the French couple last night and also traveling for a day with Russian family was what I have done in Kazbeki. In Kazbeki area I stayed in a village called Gergetti just next to Stepansmindra in Nazi guest house. Where I could have a bed, food for 3 meals and tea and coffee whatever I wanted during the day in just 20$ which was quite good deal. After 2 days I was going to return, I had to cycle through the same road as I did to get there which is not actually fun to cycle a road twice. Nazi told me that the Russian family is going back to Tbilisi and they can take me to Jhinvali for frees which. Jhinvali is a city on the way and from there I wanted to take another road to continue to experience a different road. I was very lucky to meet that family even though we couldn’t communicate very much. 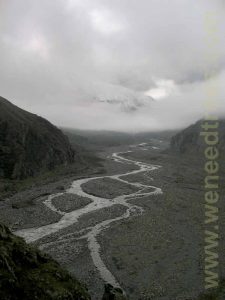 The road to Kazbeki continues to the Russian border which is almost 20km from Stepansmindra and it was in the opposite direction from my way back to Tbilisi. But luckily George (Russian guy ) went to the Russian border to visit a church just on the border…the road was just amazingly beautiful and I was so happy to have that luck to visit the place. A very wild area which I could see many big birds ( I don’t know their name in English ) and lots of mountains which their tops were in the clouds in that fuggy day. I was absolutely amazed by that beauty and thanking GOD for that opportunity I had to visit that place….yes this is how nature and GOD help you while you are following your own path. I couldn’t even imagine I would be able to see that area. I was floating in my dreams and appreciating all those beauties. We stopped few times to take pictures and to breathe that peace and joy. I could feel it with all my cells. Anyway we turned back and continued to through the main road toward Tbilisi. I had to drop off in Jhinvali which was the place I already had spent a night with that stupid dog. I should stay there again for another night and the next day leave for Tianetti. The road to Tianetti goes through forest and of course there is many hills but I knew it could be a nice road and also I wanted to experience a new road and explore new places. When we were close to that waterfall I was just wishing to do not meet that dog anymore but!!! No way…she was there and as soon as she saw me she began to walk around. The owner was there this time. It was raining like shower, I just squeezed to the same shelter and after I changed my cloths I went near the fire. The lady brought me a coffee and I was trying to communicate with Lasha which a guy was almost 22 years old trying to improve his English. I had 2 sandwiches but I was full as we had lunch in restaurant with George so I gave one of them to the dog and it was again a reason she stick on me. After about an hour a group of 7 young guys came over to have dinner. I was tired and lying down in my sleeping bag inside the shelter, one of them came and called me to invite for dinner. I was still full but I joined them. Having dinner in Georgian style means drinking a couple of bottles beer, wine or vodka plus something to eat with drinks. Always in the afternoon you see people just drinking, I have heard about it before but I couldn’t believe it. They really drink a lot. Anyway it is their life style and I can just be a visitor and pass, I am not in a place I can say it is good or bad. As long as they are happy, means it is good for them so I just respect it. After I went to sleep the stupid dog was just annoying me. She was hardly trying to sleep in the same shelter as I was.there was many and she could choose another one but just the one I was sleeping. I closed the door with my mattress and I put many stones around the mattress but 10 min after each time I closed it more carefully I could hear her noise coming in. I was almost angry. She was wet and she splashed water all around which I really don’t like dogs to do that. Anyway after 2 hours struggling I gave up…she was enough serious to come in and I could do nothing. I just put all my bags and everything far from her mouth and slept. Next day in the morning the owner bit her by a big stone…poor dog and she was gone when I left that place. I was thinking of her while I was cycling for the first few hours…to be honest I was not fare with her…she needed just some attention and respect and I didn’t give her that. I was thinking that is so good which human is not deciding to do anything with creation, otherwise we would put all our desires in action and world would be a horrible place to live. I was thinking how GOD can pay attention to any of us while for example I do like that with a dog? Again judgment and making good or bad out of things was my concern. It needs a hard work to stop it, to stop making all those judgments and be kind enough to everything, even to what we might don’t like without considering any kind of race or so… I was cycling through beautiful forest in a dirt road. Regarding to the map it should be a secondary road after highway but actually it was a dirt road and no asphalt and f course not many cars, just one in every 30-40 min. because of rain last night there was a lot of mud on the road which made cycling a bit tough. Even sometimes I had to get off from bike and push it through the sticky mud. But scenery was enough beautiful I could not even think of that difficulty. After Tianetti I had 2 choices, one go directly toward east and Kakheti and another was driving me south to Tbilisi again. The second one was longer and much harder as I had to continue that dirt road and go through lots of hill but in the other hand it could be much nicer and it was indeed.

Around 4pm I was passing a very big farm and I saw an abundant house at the end of the other side of farm. Suddenly I thought woow, it could be a very nice place to stay overnight and enjoy just silence and sound of birds. so I did…it is true that I was not prepared for food and I had nothing to eat but eating was not a problem, I could still make a coffee and just sit and enjoy. It was so nice not having anyone even to talk and being just silence listening to the nature. The next day I woke up before sunrise, I sat in my tent which was opening just in front of sun, waiting for sun to rise. It was a bit cold and I was happily waiting for the sun to rise to enjoy warmth of sunshine. This is my life, enjoying little thing which are actually not small. They are enough important and big to do effort to get them. I had to cycle few hours before I could find something to eat. There were not big cities on the way and no restaurant…around 12 I could find a shop to buy some row eggs and I found a nice spot in the forest to sit and cook the eggs. After climbing all those hills it was time to descend 1000m in 25km. so cool. Regarding to my map that road would meet the highway to Signaghi and then I had to turn left and the other direction would lead me to Tbilisi. I had no plan to come Tbilisi again, so I asked people for direction to Signaghi (there was no sign board I could find my way). Also there were two different alternatives; one directly goes to Signaghi and the next through Tbilisi. I asked at least 8 times for my direction to Signaghi and people all gave me the same direction. I was cyclingalong a big river…I looked at my map but I could see no river this close to the road I supposed to be in. from distance I saw a big church…woow such a nice church and city was so nice. I thought I am in Sagarajo. I was surprised it is such a big city. I saw a new and very nice bridge exactly like what I saw in Tbilisi. I was absolutely surprised but suddenly I was shocked..Hey!!! I stpped by a person and asked himwhere is here and he replied Tbilisi….what!!! Tbilisi. Oh no!! I was in Tbilisi again and a just went to Ugis house and knocked the door…here I am again.