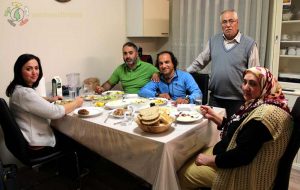 Having dinner with Fatma’s family

After I arrived to Amsterdam Human was waiting for me in the airport. I knew Human since I was around 17-18. We used to go for cycling together but after he moved to Netherlands I had no idea where he is what he is doing till last few years that we found each other again through internet in Hospitality club.
It was amazingly nice feeling to have him again in my friends list and since over we were in touch and I should honestly say that he did more to keep our friendship. I am grateful for all his kindness.
And now after such a long time we could meet again but Amsterdam this time.
First time in Europe, it was nice feeling and I actually started from the bicycle land. After we get out of the train in station I saw a huge number of bicycle and cyclist!! I actually got nerves.
I should start from a point to find a bicycle, panniers and some other stuff I would need for cycling.
It was funny which I came to Europe to cycle but still I had nothing. I received an email from Moses my German friend who lives in Aachen which is 240km from Delft. He was willing to deliver his bicycle for me. Great, I could have a bicycle and also not only the bike but also a feeling about friendship. I should admit he made me really nice feeling.  Also Human had a set of panniers he just bought them just for 50 EUR and he gave them to me. Everything was working smoothly and meanwhile I was enjoying my friends company.
during the time I was in Delft ( where Human lives ) I had chance to visit Den Haag almost everyday to spend time with Morat and Fatma, 2 Turkish friends who I just hosted them a week earlier in Mashhad and now again we were united enjoying roaming around the city. Luckily the weather was just nice, almost a week not rain and I could walk around the city with no problems. 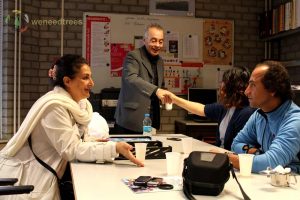 With FAtma Aktac in school

During the time I was there Fatma organized 2 schools to visit and it was actually the first step we put together for farther co-operation. She studied about organizing social activities and Murat also is studying law, so it is great they are going to be a part of “weneedtrees” project.
The project is growing and of course it will bring me more work to do as well as it will make me to travel more too which is great.
While I was in Delft I also met Ramin which we were in the same class from grade one to 12 and after that he also moved to Netherlands.
Time was passing by and I had to start soon. On the last day I bought some little stuff I needed and just at night with some friends we went to Aurasia office where Mrs Aktac works.
we could plan our future work with Fatma and Murat and also Fatma Aktac. Honestly I was so happy to have them around and it made me a big hope for the future of “weneedtrees” as I need more people like them to help.
Finally the day arrived to sit on my bike and began to hit the road. After more than a year again I was on saddle which is actually not fun at all as my bath would have so much pain after few hours but anyway always the first few days are the same and to go through them I shouldn’t be that kind to my bath.
I began to cycle in a nice weather but after 2 hours rain starts but luckily not wind, so it wasn’t that cold and I was enjoying it.  Just I had a little problem with roads in Netherlands, everywhere there are so many nice cycling path which is just great and they are the best in the world for that but for me which I was not very familiar with those kind of roads was like going through a puzzle, and it took me long time to through each city I would arrive. Honestly without navigator or very cycling detailed map it is definitely hard to find the way but after 2 cities I learned something and it was much easier for me.
The first night on the road and looking for a place to sleep, again I was exactly where I supposed to be in my original life. It was totally dark and still looking for little corner to pitch my tent. Finally I saw a sandy road off from the main road and after 2-3 km riding in that road I found a little place I could set my tent.  To avoid attracting any attention I tried to do not use my headlamp and after 15 min I Was at home!!! 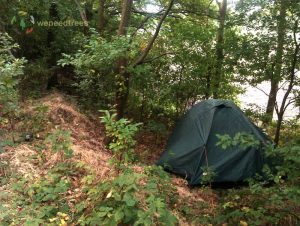 my first camp in europe

after having dinner which was just a ready food I bought form supermarket I just lied down to have a little rest for a little while and I even didn’t wash my teeth. It was almost 21:30 which I lied down. I woke up and looked at my watch…it was 7:30 in the next morning!! It was so good.
After breakfast I packed again and I was on the road soon again.
weather was a combination of rain, cloud and some little sunshine. I had 150km to Aachen and I should make it that day as I was in that direction just to visit Moses, so I should save the time but I knew it would be hard to make it in the second day of cycling when all my muscles were cramped. In the other hand I wanted to stay a day with Moses, so I should be there at night but Moses told me if you couldn’t make it to Aachen I will come to pick you from wherever you reach.
in the late afternoon I arrived to a city called Hasselt. My phone was out of battery and I stopped by a fast food to plug it and call Moses. The phone didn’t work !! and I asked the lady to call. Meantime I ordered a coffee. She called Moses and gave him direction.
After I had my coffee she told me that little coffee is nothing for you and she offered me the second one and just after few min the third one came. !!
we began to talk and I told her about my journey while waiting for Moses. She even offered me a dinner !!! it was amazing to see people all over the world that kind. The border means nothing to me nor religion or nationality. Just we are all human being and that is big enough to love each other and to respect.
in return I wanted to give Van Hout Bertie back something too. I searched my bag for a friendship band I bought from Nepal. When I saw it, I though it is not mine anymore and I gave it to her. 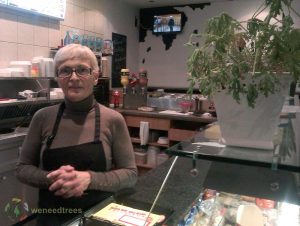 Moses was late and I was waiting for him. Finally he arrived very late and when he described why he was late it was just funny. The lady didn’t tell him the name of street as there is 2 street by the same name and he might get lost, she just told him about the fast food along the way, but Moses came from the other side of city and he already passed bunch of fast foods !!!
Anyway I was in Aachen sitting by the fire at night sipping my coffee and talking with my dear friend Moses.