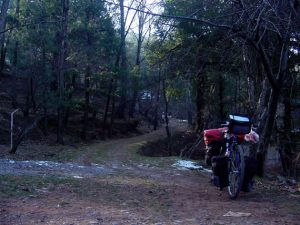 Sorry that I didnt write for a while .After that I saw my porcel has not recived I faced with 3 days holiday and it was boring for me to stay at home due to everywhere was closed in those days .so I desided to bike to Keshmir area which is wonderful . I went ahead to Murry -a city about 50km far from Islamabad and in northern area-which has very nice road and landscape .(I put some pictures in gallery,go and enjoy as I did).there was more than 30km upslop and it was really defficult to bike with very heavy load ,but it was very good exercise for me and in the othere hand landscape was wonderful and I couldnt egnore it becuase of defficulty of road .about 5 I arrived to Murry and I was looking for a place to put my tent as a first camp. I asked of a family to let me make a camp and they kindly accept it .it was very nice experians for me the first camp and very joyful . however the weather was alittle bit cold and after a short snap I began to cook and fried eggs and a cup of hot coffe was everything .I promissed them to leave there about 8 ,but I did it after 9 in cuase of coldness and at the time of leaving nice coy of family brought me a cup of hot tea which I never forget it .Just I decided to bike and I didnt have any special destination that the road was destination and I promissed myself to ignore time , so just I biked through beautiful road which I have seen just on TV and pictures. after about 10km road began snowy that made it more beautiful . by the way that day was eyd o zzoha that is eyde ghorban and everywhere is closed and just afew car were on the road,so road was very quete and calm like a dream .I was biking ahead to Mozaffarabad but I faced with very hard downslop ,it was very nice to bike there but I had to back in the same road and really it was impossible to bike , so after 15km I came back and I couldnt visit the place of earthquik .in that day I liked to put my camp earlier than the day befor and enjoy of landscape , so I asked some guys for a place to camp and they invited me to their house . They said that you are my guest and you dont need to camp , you can stay here and so….we went to their house and we were there for a while , but after that I praied like shia their mind saddenly changed and they said that you have to go to hotel , I dont know way and really I cant jodj about them . just I left there and I said that I dont need hotel and just I want to put my tent , but I lossed the time ,the sky was becoming dark and weather was really cold .I had just 10km to my last place and I biked there. it was very dangerus biking in that road with drivers like pakistani ones .just I wanted to arrive there and I didnt care about my fingurs and feets .when I arrived there I became so happy and asked them for a place to camp , but they brought me to their house and prepared everything for me as food and warm bed and hot tea which were wonderful . The morning later I didnt like to wakeup and leave very warm bed but I had to go .so after very nice breakfast I left there and I start biking ahead to Islamabad .just after 15km there was a beautiful mosque on the road .I soped there and you can read it in my next report.