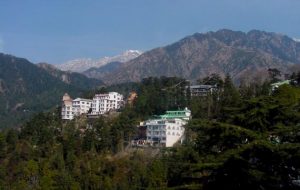 The road in this area is really beautiful and ful of trees.after a nice night in a temple on the road and also very nice dinner and breakfast in one hendoo man I biked ahead to Dahramsala which is very famuse and touristic city in this area.but Dahramsala with its owen dosnt have more intrest and very nice place and beautiful which is just 10km from Dahramsala is Mcloadgang .from guide book I knew that the rate of hotel and everything in Mcloadgang is lower than Dahramsala,so I biked there but it has 10km road which is really breathtaking and defficult ,specially for me with alot of loggages .I had just 2km to the city and the Sun was disappiering that I faced with my first flat tire .

Ok it is one part of my trip and I have to do it .at first I wanted to pump it and go to city then repair it but I couldnt due to the big whole on tube .fortunatly the view was really nice and I enjoyed of there and after that I arrived to Mcloadgang when everywhere was completly dark .by the first time I took a room in a guest house by the reasonable price and after that just some walking around and visiting new face of India which is complatly different with India.

You can not imagin that here is India due to almost all the people are tibetttin and they speake as tibettin language and they have also their owen government .the faces also is chines and you can find so many chines food here .Mcloadgange is located in himalyan mountain range and 14th Da;aelama refuged here when chines government forced them and they marched to Lhasa then he crossed from mountains and he was looking for a safe place to live with his people, so many of people came here with him . also he is rewarded with Nobel peace prize in 1989 because of his peaceful solution .so alot of bodhaee people come here to visit the Dalaelama Temple .Mcloadgange also is located in mountain and it is souronded with very beautiful jongles and tall trees and it has very nice view to other villages and it has a route trekking which is very clean and very clear route ,so today I trekked that route and just I enjoyed of very calm and southing place .it has about 3 hours walking to Trune which is the highest point of hills with 2790m altitud and after that you can climb the summite with about 4200m .

I forget to say what happend on the road befor Dahramsala.Just I had 20km to Dahramsala and time was about 2:30 that a man invited me to drink a cup of tea .at firast I refused and becuas I didnt have much time and I had to came to Dahramsala befor darkness but he insisted and then I stopped and after drinking tea he saied do you lke to visit villages life style here and for me it was a big chance ,so I accepted and I staied in his house for 2 days.

2 unforggatable days with very nice family in calm and beautiful village .I had some trekking there with his son . it was just heaven noting else .also he invited me to go Jummo with him and tommarow I want to back his village and leave my bike there and go to Jummo which is also very nice city and for me it is a big chance to get there .I have 40 days visa and I like to spend much time in hilly area insted of flat road and I will bike faster when I get out from Himachal pradesh .