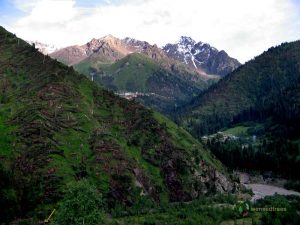 I got my Uzbekistan transit visa on July 2 which was already 2 days after my Kazakh visa expired…I knew that Kazakhstan has a very tough regulation about visa stuff but I didn’t pay attention very much. I was not actually worry about it. It was Saturday when I went to Uzbekistan embassy to get my visa. They have told me that I can pick up my visa on Saturday even though it is not a working day. We were negotiating about the time and they told me “no problem, we will open the door just for you!!!” Anyway it began to rain around 10am but I took my bike and I went to Uzbek embassy. It was closed!!! I talked to the guard and he spoke on the phone with the consol and I was rejected. I was a bit angry and I kept talking to the guard even though we both were not able to know what we were saying but we could understand. I pushed him to call to the consol again and I talked to him myself and finally I went in. I was applying for transit visa in urgent, so I had to pay almost double for 5 min work which they did it in 3 dyas. The consol picked my form and in 5 min he gave me the visa. Outside was a hard rain and I had to wait for 30min for the rain to stop before I go back home. I had to decide either I leave the same day or the next, but my Uzbek visa was valid for a week to use. My Kazakh visa was already over and there was no difference to have one more day overstaying …we have an expression in Iran which says” when the water is over your head, no matter a cm or a meter” and now the water is over my head. 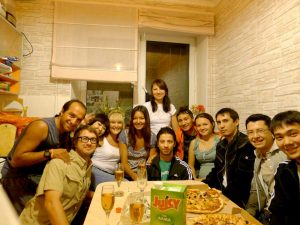 So I decided to stay that night in Almaty and enjoyed more company of Jeff and Aigerim. We decided to make a farewell party and invite our friends to have a nice night at the last day of Almaty and I had to finish my work there..One of the most important things I had to do was talking to Jeff who is environment science professor and he could help me a lot with some date I can use in my workshops. we went to a coffee shop and chatted for few hours while our subject turned to some very deep conversation about life, people, education ..etc, which I befitted by his knowledge. I have made many friends there who would join us in our party..We were almost 12 at last. It was amazing night and we laughed a lot. Jeff is so funny American guy. I have never laughed that much in my journey like I did while we were together with Jeff and Aigerim. (Just I could do it with Rick, my American friend). Party was quite nice, 2 pizzas was enough to serve 12 persons!! and still some left. In out party I met Wanda another American traveler who were saying she is 105 years ( of course she was kidding )but I think she could be around 65-70 and still traveling. The way she was talking about traveling and moving was surprising; even she does not have any house for herself while everyone in her age wants to have a certain life and comfort. I hope I can be the same (at least) when I am in her age. People left our house at 1am and it was time for me to start packing. Jeff was already sleep or I don’t know maybe pretending to sleep, but I woke him up. I didn’t want to pack and be quiet, it was our last night and we could still have more fun. I was packing till almost 4 in the morning…it was the same as I did the first night before I leave home because all my stuff were just spreading round in balcony( this is a problem I have when my host is too kind and lets me do whatever I like). In the morning I had an appointment with Iranian TV reporter at 10, but still I didn’t finished my work, I postponed it for more 2 hours and again for 30min and finally I said goodbye to Aigerim and Jeff then. I love you…it was my last words to Jeff and Aigerim before I skirt around the building. during our interview with TV I met Dilyara ( another friend of mine I met her few times in Almaty and she came to my goodbye party and we had 2 beautiful nights driving out of the city in mountain together). I met her accidentally in the street and after 30min she sent me a text message on my mobile. I had no plan to stay more in Almaty but when she sent me the text, I thought it is a bit late to leave the city. It was around 4pm when I finished the interview, so I considered her meeting and her text as a sign to stay that night as well. I didn’t go back to Aigerim house neither I called her because Jeff and her were about to visit another city and they postponed it one day because of me, so I didn’t want them to change their plan. I called Dilyara and she picked me up around 6pm in a restaurant and we went to mountain again. Fortunately I had all my stuff with me so we could make a coffee out there in mountain which was great. I was quite lucky to have that chance to visit some small part of mountains in Alamty. Finally it was time to leave, July 4 at 9 am…Dilyara sent me to the main road and I said goodbye to another friend who I had made a deep and good relation with her.

I was on the road again…I knew I had to follow the main road all the way to Chimkent and then Tashkent. After 15km I saw 3 cyclists ahead of me who turned to a small road parallel to the main road. I followed them I called them. One of them looked back but they were in downhill and they didn’t stop. I felt ok they may are not much interested to have another company, so I turned back to the main road and continued. Just after 200m I opened my map and I saw the road they have taken is a small road going to the same direction for about 40km, so I could get rid of main road for at least 40km. I turned back and I followed those 3 cyclists. 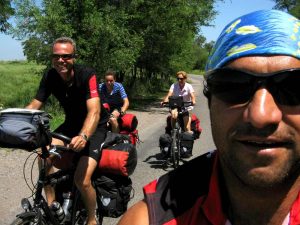 After 7-8km I catch them…they were a family from Netherland traveling on bicycle for the 3 weeks vacation going to cross the mountain to Kyrgyzstan. I am happy that I followed them because if I wouldn’t do that then now I should write “I met 3 cyclists, I called them and they didn’t response, they looked back but they didn’t stop for me, they just ignored and ….” But now I have a rig t image in my mind and I can say “I met 3 wonderful person, a family of father, mother and their son traveling together on bicycle. They are so cool and very warm and kind, we had a nice ride together for few hours and now I have 3 more friends. They offered me to visit them in Amsterdam and stay with them. I am so happy to have met them and cycle with them.” Most of my life I have been trying to learn how to keep my heart and mind clean from negative thoughts. How to learn to trust people in any way I go through, so it was really nice to return and to follow them. Now I have a beautiful image in my mind which could be a gray one if I would just continue. After an hour riding together I said goodbye to them because I had to cycle faster to cover 150km that day. But!!! As always someone stopped me and he invited me to his house to have a tea with them. In between my cyclist friends also arrived and we went all to that Kazakh family to have tea and enjoy one more time Kazakh hospitality. Finally it was time to split and I moved back to the main road where I cycled the entire long and they turned left toward mountains. Again evening and looking for a place to stay overnight. It was really hot and I needed a place which has some trees at least. I saw a bunch of trees near the hill off the road on the left side. I could imagine there should be a spring and of course some houses as well. I got off from the road toward hills. 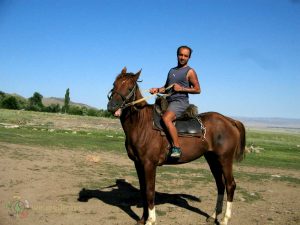 I saw many horses and a guy who rode toward me…I told him can I put my tent somewhere around and his first answer was “ go home, we have horse milk. I want to give you some horse milk” and another story from Kazakh people were about to begin. I stayed in their house at night and I had some horse riding as well as I had horse milk. after almost 18 days not cycling I was feeling tired and my muscles were cramped a bit. It was really hot and I couldn’t cycle very well. I knew from a city called Korday I have to take a smaller road which shouldn’t have a good asphalt and still a long way to Chimkent. In regard of my visa for Uzbekistan and its limitation time for using it I had to get a lift for at least 3-400km but still I was not quite sure which part I can do it. After 115km that day I was passing some small shops, I turned back when I passed them all to buy something. When I returned a truck driver who was driving in the same direction as I was doing shout on me telling that I shouldn’t turn, I am going to the wrong direction. Actually he thought I am going to talk another road in the junction. I turned back again and I went to his truck. He stopped for me and I showed him my map even though I knew where I have to go and I knew direction. Just I did it to appreciate his concern. He jumped off his seat and looked at my map and then he said I am also going that city, if you want I can give you a lift!!! Yes, lift had come it self and I just took it. We fixed my bike under the truck and it was time to experience my first hitchhiking by truck in my journey. I arrived next day in the afternoon to Chimkent and still I had 125km to the border and actually it was the last day I could stay in Kazakhstan otherwise I would lose my Uzbek visa. It was really hot, 46C evening 5 in the afternoon. Just I went to an internet café to send few emails and then I began to cycle at 7pm.