Home ASIA China Having some days off from Beijing

Having some days off from Beijing 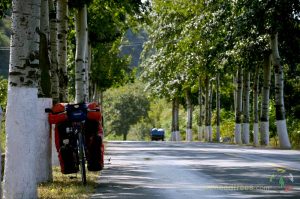 After few days in Beijing and staying mostly at home it was time to have some days off on my bike through mountains.
I had a look at the map and I designed a journey for 3 days. Meanwhile a friend called me and offered me to stay with her family in Beijing.  Mrs Morassaee and her husband Saeed Khoshroo with their 3 kind girls were people who I was going to meet after coming back from mountain.
They moved to Beijing a few months ago and she is one of those who is following my radio reports and after she learned I am here I Beijing, she offered to host me. I actually was searching for a place to stay after returning from north and as always it just happened.
I said goodbye to Eve and she left to work, then I just cleaned around my room and got ready, I sat in the living room and I had my last coffee before leaving her house.  Actually I could have lots of nice Nespresso because she has the machine and I could enjoy taste a nice coffee.
I was sipping my coffee and thinking of life, road, journey and the peace I have while being on the road.  I actually have peace everywhere, but on the road and being alone is something totally different which is hard to explain its special feeling.
I left around 12 and began to cycle off Beijing toward North toward road 213. Regarding to my map that road would cross China great wall and I could see it finally 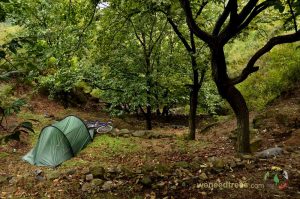 through my own eyes. That’s a different experience to see through your own eyes rather than seeing it on TV or ..!!

It was beginning of autumn, so dust everywhere and all trees were very dark green and their leaves were full of dust. Not so pleasant at all. I began to climb hills and road was not that busy as I used to see in China which was good enough. But I liked to see trees fresh and shining. I was thinking of rain, some shower over trees and farms. I was imagining how it would be nice having rain and see all these trees fresh and shining.
It was very dusty and quite polluted  and I even couldn’t see mountains.
again evening and my usual story ..” looking for a place to camp”
After a hill I began to descend and there was a 180 degree bend and just at the right side I saw a Chesnutt orchard and lots of Chesnutt trees.  It was in many different levels and ground was almost flat under trees and good enough to pitch the tent, but the problem was to cross the bike over a big gap.
Finally I could manage it but still it was so hard to climb the bike, so I left it and took my bags in 2-3 times to the place. I chose the upper part as it was much nicer and also had no view from the road and I could just camp there alone and no one would see me.
luckily harvesting time was almost gone and people were already had collected Chesnutts, so I was also sure no one would come around.
I camped and I squeezed to my tent. I was so happy, so fresh and so much peace I had in my tent.
I slept like a baby in his mother arms, calm, peaceful with a pure joy in my heart. 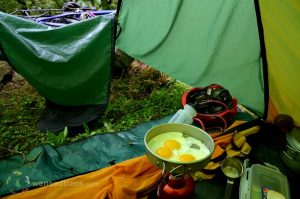 It was midnight which I heard sound of drops hitting my tent…wow!! It was rain.  Nothing could happen better then.
I was smiling and listening to the rain. It continues till morning. I was not in hurry and even I was thinking if the rain does not stop, I just will simply stay there another day. I had enough food and water and it was a nice place, so I didn’t need to move then.
But rain stopped at around 9 and I began to clean, dry my tent and pack and I left around 11.
I had no idea where I will go, I just wanted to move and go somewhere to enjoy nature.
After 10km I saw a sign indicating a lake 3.8km off the main road.  It was an idea to go there to see the lake and return to the main road and continue.
I cycled there and I saw Great wall meets the lake in that point and through the pictures I found there is a very nice walk around the lake but I couldn’t take my bike with me!!! the only option was to rent a room and leave my bike there to walk! So I did. 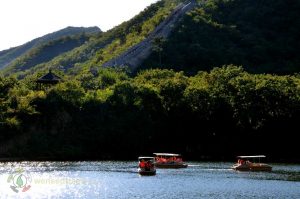 I rented a room and packed my bag pack and began to walk. Honestly it was the best choice I could make.
I skirted around the lake and followed the river upstream through a nice valley with many big boulders and high walls sides of the river.
I returned to my room in the evening and I went to have dinner. Randomly I chose a restaurant but I had no idea about the menu.
the only thing I could do was just to walk to the kitchen and see foods myself and point at one of them to order and I chose a big plate of meet cooked in Chesnutt sauce with some rise which was amazingly good.  I love eating and nice food, so I wasn’t happy to feel full and leave some foods there!!
back to my room to enjoy WiFi and chatting with friends.
next day I looked at the map and I saw the road 213 will end in a T junction and the right one will take me to another road and I can make a loop and return through a different road to Beijing.
It was pity to return soon, so I called my host and I informed her that I will return a day later than I was planning. It was really pity to leave that wonderful road and nature.  So beautiful it was and not many people and weather was just perfect was a bonus also.

Regarding to the map and also google map I had 170km to ride through that loop, so I decided to cycle 70km that day and leave 100 for the last day and I knew there will be some climbs

I was climbing a long hill, steep hill and at the top I stopped to have a look at the valley. There was a Chinese guy with his family called Mr Ly who took a picture of my and his son and we had a very short chat.
It was 4:30pm and I had to find some food for dinner. I decided to buy some eggs and bread or rice for dinner. There was a little village and I went through to see if there is any shops or not but I couldn’t fine any.  After I came out of village I saw my left pedal is not working and I cant fix it in to my clips pedal !! I stopped and I saw a pin is out of its place and it is almost about to break. So I had to fix it quickly which took me 25 min. 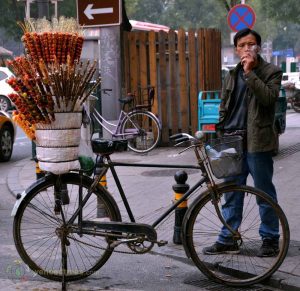 after I was almost done a woman came and asked me if I need any help? I didn’t and I just said thanks to her but also I asked her if I can find any shops around or not? She replied that her relatives are living just 200m from that point and she can help me to find eggs and also she invited me to her family house.
I was following her but I was also quite upset as I knew if they invite me to their house it means I would spend some hours there and I will miss sleeping in the nature.  I really wanted to camp, I was not happy even to sleep in a 5 star hotel. Just I needed my tent out in the nature.
I was following her and thinking of nature.
she invited my inside and introduced me to her family, which they were many.  It was holidays and almost all the family were together.
her daughter could speak English quite well and she invited me to have dinner with them and meanwhile they brought me some eggs and rice as I needed.
they were talking, asking questions and her grand mother came and sat next to me and she were saying something which her granddaughter also were apologizing for what she was saying even though I had no idea what she is saying.
they offered me a tea and I hold the tea in my hand. I was happy to see them all around and the same time I was thinking of nature and my soul was outside in the wild.
Suddenly the grandmother hold my hand and pushed me out !! even she took the tea from my hand and throw it away and just pushed me out !! it was funny and I was laughing! Her granddaughter kept saying sorry but I was so happy to be able to leave and go to the nature.  I didn’t care what she is doing, I just wanted to be out alone.
in 5 min I was singing, whistling and dancing and cycling trough a beautiful road.
It was autumn and trees were already losing their leaves. It was like a concert, like a dance, like a dream, like a painting, like a story, but it was so real, it was life which I have chosen myself. 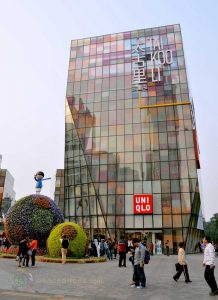 I was planning to cycle 70km and still 10km left which sky was getting a bit dark and I was climbing a hill.
I was kind of disappointed that I cant make it but I saw myself at the top and then just descending the hill. And quickly I reached at 70 and there I found a shelter a bit hidden from the main road and good enough to pitch the tent.
I had another night in the nature, another night alone in my tent and another night with entire peace.
I slept at 8:30 and I was planning to wake up at 5 and leave at around 7am. I woke up then but I decided to sleep a little bit more and suddenly I woke up and saw it is 7:48!! That’s a big problem I have as I always don’t want to wake up when camping in the nature.
I quickly had my breakfast and left at 9.
That day was my sport day and I was going to just to ride fast and satisfy my sportive desires.
I was in Beijing at 13:30 and it was 15km shorter than I was expecting.
I rode to the address I had and in half an hour I was there with my new friend to explore a new life, new friends and learn more.