Cycling through the longest abundant road in Iran 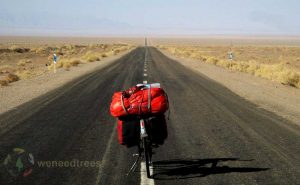 It was no so pleasant to stay in a closed room alone in Emamzadeh ( means tomb of some holy persons which people go there to pray! Or something like pilgrim).

That’s why I didn’t stay in Tabas more than a night even though I needed more rest. In that room I did all the wrong things a guest could ever does!!! Taking shower in toilet !!! toilet didn’t have hot water, so I filled my bottles which were in total 3 liter of got water.

Then I went to the toilet, I washed the ground with cold tab water and I washed myself with that 3 litter of hot water. My mother would kill me if I do that way at home!! The other wrong thing I did was cooking inside the room. Outside was bloody cold and I just took shower, the kitchen was exactly the other side of the yard….so far !!! Anyway it is just an excuse but I also was tired!!!! It was not all….I washed my cloths in toilet and I made a rope inside the room and I hanged them to dry!!! I don’t forgive myself…I was more lazy than tired, or scared of catching cold. 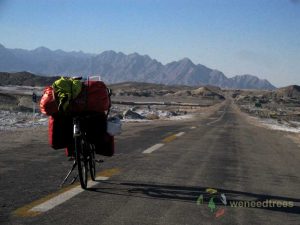 Honestly one of the reason I travel is to know to live as a real human but sometime I just forget and I do those wrong things. But no way!! I am learning and still I have time to make mistakes, the importance is to do not make mistakes twice. Beside all those bad things I finished some work on computer which was quite good. Next day was Friday and almost all the city was closed. I was trying to find some meat to make pasta for the coming night but I didn’t find. I had a big desire for meat.
I left the city around 12, so I didn’t have much time to ride before sun sets but it was a pleasant ride in desert. I began to cycle in the longest road through desert in Iran…180km and not even a small village along the way. Of course this distance for some countries like Australia and US is just normal but here in Iran is so long!!! My very old dream was coming true which was to cross the desert on bicycle and camp alone in the middle of desert alone. 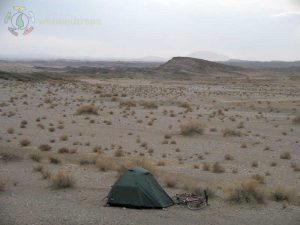 I was excited and happy… As far as your eyes can see is just desert. A road which goes into horizon, a bondless sight which takes your thoughts so far to an endless line…and in between you are alone cycling along the white lines aside the road. That day I just cycled 70km till 4:30pm. I cant ride after that as days are too short. Sunset is about 4:45pm. Around 4:30 I found a small dirt road getting off the main road and some little hills along that way.
I just followed that little road and behind the first hill I turned left toward the hill. There was some little bushes, not actually bush but some kind of small trees which grows in desert. It was the best place I could pitch my tent and I had some wood to make a fire. Wow ..It was absolutely amazing sitting outside in desert, making fire and tea watching the moon which was so bright. I made fire at around 5:45pm and I was planning to sit by the fire till 7:30 then make pasta for dinner and sleep. It was 11:30 and still I was near the fire!!! I couldn’t even leave. I even didn’t make pasta and I just ate some bread with cheese. Actually it was pity to leave that beautiful moments and get busy with cooking stuff. I was more happy to have that silence for a longer time. In the movie of “ In to the wild” the guy told in the last moment of his life “ happiness happens when it shared” sending sms to my lovely friends and sharing that beautiful moments with them was the way I could share my happiness with others. In the morning I woke up at 7:30 and again I made a small fire to make a tea…that’s true which it was so pleasant but every pleasant moment has to be finished for the new ones and I had to leave for another story… I had 170km till my next stop and I was not in hurry…I would like it to do in 2 days. So I just cycled 75km that day. 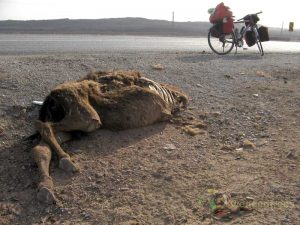 There is a small supermarket in that road where the American air force was stuck in sand storm in early years after revolution. I stopped to buy some little things and I asked the shop kipper for a good place to camp!!! It was a big mistake asking such a question from a person who has no experience of camping. Of course he scares and he cant give you anything but fear and he did. He told me that it is so dangerous camping out there. There are some gangsters, drug dealers or so, also there is cheetah. I just left and continued to cycle for about 15km. it was getting dark and everywhere was so flat. Even if I camp 3 km off the main road still I was in sight easily which is not such a logical decision. I saw some kind of building in distance and I was absolutely sure there should be a road leading to that building. After few km riding I saw an old asphalt road on the left going toward that building and after the road was quite empty I followed that road.
The building was some kind of water storage buildings people use to make in past which called “Ab anbar” and that road was the old road which was already abundant. Behind the Ab anbar was a pill of sands and I camped behind that. I was completely hidden and it was a safe place but !!I remembered that shop kipper!! I should admit that I was really stupid asking that person. He was not even originally from this region but he transferred his fear and honestly I should say I was a bit scared. I f I would camp in the middle of desert 100km from every single humans sign I could be relax but camping that close to a man made building brought me fear.
I even send my exact location to a friend in case he can find me!!! Crazy? Isn’t it? From now on I should learn to do not know something I don’t need, they might bring me just fear and get calmness….not always knowing things helps to have better feeling and I should consider this. Anyway I camped there but I had fear, even I put my cell phone in silence mode to do not take attention !!! it was crazy and I was stupid. I found the best thing to do is to sleep deeply and I did. The alarm rang at 6, I snoozed again it rang and I snoozed. finally I woke up at 6:30 and zipped up the tent. Oh my GOD …sun was just about to rise from the horizon. It was an amazing time to be awake and watch that beautiful moment. I made a coffee and then I made a big omelet to fill my hungry stomach. 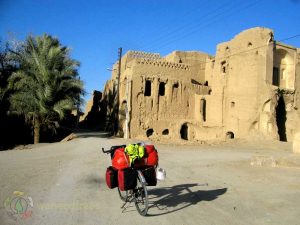 I left that place at around 9 and came back to the main road…I sent a sms to my friend informing him I am fine!! after 20km road split and I took a road toward north where I could reach the border of Iran’s central desert and Dasht Loot ( Loot desert). My next stop was in 50km and easily I could see the end of that 50km road. It was a straight road all the way through a vast and dry desert, but amazingly beautiful. I arrived to Baiazieh at 3pm. I was looking for a local to stay with him but no one I found. So finally I stayed in mosque in a private room. I was tired but too much to do including this chapter you are reading. Also I had an interview in radio, so I had to stay awake for that. Now it is 11:40 pm which is so late for a me to sleep….I just finish it here. I have to pack tonight to have more time to sleep tomorrow morning.