Cycling through the last part of mountain in Austria 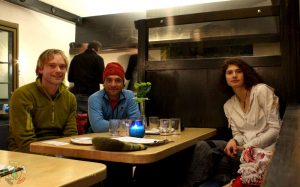 In Innsbruck I didn’t have any school to visit or anything to do, I just wanted to have rest and get refresh again.
Mirjam was living in a hill which is faced to the city and I could see all the city at night which was amazing.
I arrived there tired but she said that she has a meeting with some friends and if I am interested to join we can go together. I was tired but there was a chance to meet new people and of course new experiences, so it was the purpose of my journey so, I quickly took a shower and we went there.

At night I just died but like all the time after having a tough day I couldn’t sleep well. Usually I cant sleep very well after a hard day or when I am in my tent for a couple of days. My body does not feel comfortable in very fine bed!!!

During the 2 days I was in Innsbruck I met many of Mirjam’s friends and we were sharing our experiences.
on the last day of being in Innsbruck I got a message on my FB from Andy, a virtual friend who has cycled from Austria to Thailand in 2008.
we were friend on FB but we have never met and after he saw my pictures on FB just left me a message to invite me to his place in Innsbruck!! I was just there and I was also going to leave the next day. So I wrote him back and asked him for a coffee in that evening and we met in Hooting, where I was living. We went for a short hiking to have a view over the town and to have a gluewine on the hill.
It was great meeting him and I was glad to get his message in the right time. So we just appreciated the chance and it was for me the very perfect way of living, to appreciate the chances before losing them.
Anyway it was again time to pack and leave, I was working on my laptop that night till 2:30am and I couldn’t pack, but I knew I will have a long day if I don’t start early. Anyway there was no choice as I had things to do before I leave. 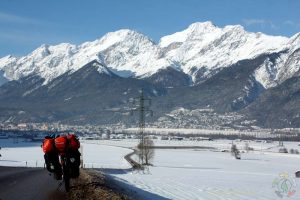 In the morning I began to pack and after having breakfast with Mirjam I started cycling around 10am in a very nice and sunny day.
It was great and fine and of course warm enough to enjoy.

After 80km of cycling I arrived to Imst where I was planning to go through a pass. I went to a supermarket to buy some milk and afterward when I asked a lady where I can find this road she looked at me and yelled “ I think you are stupid!! No one can go through this road in winter. It is closed” I showed her my map and she pointed an alternative road which was a bit longer through Landeck.
then she asked again “ why did you chose this time to cycle in Austria? Are you crazy?” I smiled and replied” this is my job!! Not always I can escape from the winter!! And left”
it was totally dark that I passed Landeck to find a place to camp out of the city. The weather broadcast was telling about the rain for next few days which was not very nice news to hear.!!
finally after 10km I found a little space next to the road to camp but I couldn’t find any place without snow and I had to camp over the snow.
I was tired and because of lack of sleep from last night I slept soon. 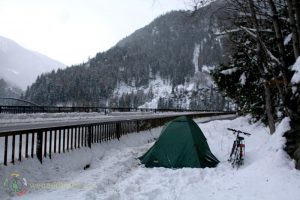 I woke up in the morning at 6am, almost 1:40min before sunrise to have breakfast and getting ready. I had to dry up my shows and covers, gloves and sucks..
I already was packed which the rain started over my tent. Not a beautiful sign at all. My tent was totally wet in 10min and I just packed it, but I didn’t put it in my dry bag as it was already wet.
in half an hour the rain changed to snow!! It was warm and at the beginning I was happy and enjoying it but soon after when I was totally wet and cold the hard work began.
I had to go through the Alberg pass then turn to the right through a small road and go through another pass called Lech.

my fingers were already sense less and so cold. I needed to warm up somewhere. I had to keep warm. I was telling myself” hey Mohammad, don’t give up..go ahead and continue…” honestly it was the time to courage myself and keep going. It was not easy at all and my bicycle was already 3-4 kg heavier.

I was passing a hotel and I saw a man standing by the door, I turned and asked them if they have a coffee?
I couldn’t go inside as I was totally wet but the guy told me doesn’t worry come in!! and his staff brought me some towels to dry myself.
his first expression was “ are you crazy? Don’t you think you picked the wrong seaqson to go by bicycle through Austria?”
after I showed him on the map about my route he laughed!!! “ that road is already closed in winter time.you cant also go through Alberg pass as it is already white and police will stop you”
I told him police has seen me few times today and they didn’t tell anything!!! He replied” can I take a picture of you with your bike? People wont believe me about you” and he took a picture with my bike which was already snowed! He said you can take a train, there is a train station in 3 km !! but I couldn’t do it anymore in Austria!! 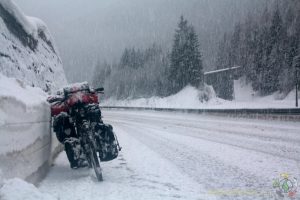 I had no choice, I had to continue as I was wet and cold and I couldn’t camp that night. I had to reach Alberschwender where I could stay with Aurelia’s parents and it was the only option I had.
I was tired, cold and wet…but I kept cycling. After st Anton I should go over the pass up to almost 1700m with a 60kg bike in a snowy road.
I was working hard and almost close to the top which I saw a van stopped side the road in 400m. I looked at the van and I was thinking” if he comes out in 2 min , means ha has thing to do himself and if not, means he is waiting for me …” I was praying he does not move nor come out and I I was cycling hardly. As I approached him he lowered the window and pointed to the back of the van!! YES…I need a lift now.
Klaus helped me to put the bike in the van and he told me he can take me over the pass or even Alberschwender but he also offered me that I can stay in his place tonight!! He is a mountain climber and also rock climber and I happily accepted. 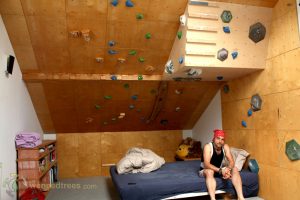 In half an hour I was there in a very nice, warm and cozy place to stay and of o=course the very fist thing I needed was a warm shower.
I was again in paradise enjoying the life.