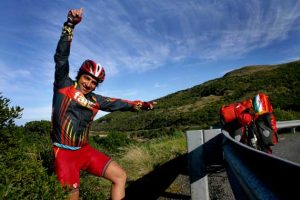 I left Melbourne after nearly 2 weeks. For 2 weeks I staid with Ali and I had a very lovely time in Melbourne. I met some very nice people but there was no way to stay longer, I was belong to the road and had to leave. Like always it was hard to leave but as I said there was no choice, I had to leave, I had to continue my life journey and go. There is some warm hands and lovely hearts waiting to touch what I am looking for.

So my first destination after Melbourne was Geelong where I could stay with some friends and also I could meet Zohreh again. It is just about 80km from Melbourne to Geelong so I was not in hurry and I left home about 12, I had left all my bicycle work just for the last day and it took me some times.

I started in a sunny day where there was no wind and a flat road, so I easily made that by about 4:30min. I staid with Kambiz whom I celebrated my birthday in his home and later on Zohre and Samad also joint. After having a lovely night I left there early in the morning and began to cycle ahead to the Great Ocean road where I was thinking of a lot. Great Ocean Road is just amazing road along the coast and most of the time I had Ocean on the side and fortunately it is winter time and no more tourists and cars. It was so quite and peaceful.

I cant forget the joy of Ocean sounds. It was what I really like and I really want to live with and then I had it. I was like playing with my bicycle and no hurry. I didn’t want it to finish very fast, that’s why it took me several day to cycle just 450km. I didn’t cycle more than 90km per day.

The first day I touched the Ocean after 40km cycling. After about 75km cycling I arrived to a small town and found a changing room on the beach. It was the best place to stay and some table, BBQ and toilet.. they were all around and I had a room and no needed to pitch my tent. But I made a mistake and slept in that room without tent, so as the room didn’t has door it was a bit cold at night and just from the midnight I rolled my mattress around myself to keep warm. I didn’t have a nice sleep but it was so beautiful walking on the beach at night and listening to the sound of waves that were coming from the far from the Antarctica.

I woke up early in the morning and sat on the beach looking at sun raising from the water when the very tiny crescent of moon still was on the ski. I was sat on the beach with a mug of Indian tea staring at distance, staring at the red point which was getting lighter and was changing to the orange. I had my usual breakfast which is muesli with milk and then start to cycle again. 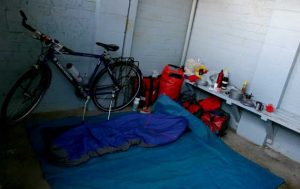 The second day after about 25km riding the road went to the forest and I left the coast. It was a hilly road and I had to cross the Otway national park. I think no need to talk about its beauty but the most magnificent part of that day was the very quite road and sounds of birds. Here in Australia there some common birds that you can see almost everywhere are some birds like parrot but white or gray with a red color underneath or very strong Red and Green or someone they are very big and black with some yellow underneath. There is some different kind of them and many other birds that I saw them for the first time in my life.

In that day I cycled 93km but I didn’t reach the coast again. It was very hilly and the rain were there reasons that I couldn’t cycle very much. Rain began in the afternoon and it was a bit cold but it was fine. It was enough beautiful to tolerate the cold. In the afternoon rain was faster and heavier and due to that some cars stopped by to give me a lift but I was enjoying and didn’t like to miss that nice ride.

Near the dark I was still looking for a place to stay and just I found a dirty road on the left heading to the heart of forest. I took that and after just a couple of 100km I was in the middle of forest of pine trees. So peaceful and just the sound of birds. It was one of the most beautiful nights I have ever had( I remember that I have told this sentence for many times…) I pitched my tent and changed my cloths and sneaked to my tent the lovely home. After I cooked something for dinner just I slept to enjoy energy of that place. I slept about 11 hours!!!!! That’s is true when there is a beautiful and peaceful place like that you don’t like to wake up. Just when I woke up in the morning I realized that there is some fallen trees around and I looked up at the trees. They were so tall and a strong wind at night could fall them and I had slept just under all those trees. However I am sure that at least I wont die under a tree!!!! 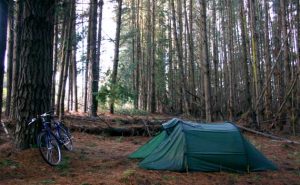 I left there about 10am and after a short ride again I was on the coast line heading for a town called Warrnombull where there is whale nursery and I could watch the Whales on the wild. I had about 100km to the town but I was passing such a amazing coast line. It was the most magnificent of the road just around Port Cambel where the twelve apostles are located.( you can see some of them in my gallery). I looked at my watch, it was showing 3pm and still I had cycled 35km. every few km there was a look out point and some wonderful scenery that it was pity to miss. I stopped by all of them to have a look at take some pictures. Just after that road again got far from the coast and I began to cycle faster. Again rain in the afternoon and some cold wind. It was dark, but still I was riding and didn’t like to stop before the town. Just a few km before Warrnombull I saw the sign for Whale nursery and I took that back road to find a place to stay around and watch the Whales on the next morning.

I was passing a very big garage that I saw a man is coming out, I stopped by him and asked him some questions about the road and the place of Whales. He looked at me…wet, tired and cycling at dark…oh so poor guy he asked me where do you want to stay? And I told him I am looking for somewhere to camp. He had a very small room in front of his garage and he offered it to me which was just great. Then he invited me to have dinner with them. Lets tell you that in that day and from the afternoon I was telling myself that tonight I should have a place to take shower and some place to stay, I wont sleep in the tent.. I then I had it. Just it happened as always it use to. I took shower and after that John came and called me for dinner. We had a very nice chat and dinner with his lovely family. I told them I can go to a hotel and have a nice meal in the restaurant but having something that comes just like this is so pleasure and nice and I don’t like it to change it. I am looking for having some times with people and staying with them and learn from them and make more friends. They were really kind and lovely and their kindness really touched my heart. In the morning I didn’t see Emily who is a friendly Korean girl adopted with Johns family. she sent a text to her father that say goodbye to Mohammad because he was asleep when I left home. it was great to know her dream about being a teacher and help the other people to elevate and educate them. After that I packed my bags but it was rainy and John offered me to give a short ride and show me around. We went together to Whale nursery but the ocean was rough and strong current and wind was the reason that the Whales didn’t show off. I missed them and then I started cycling again. I hugged John and said good bye to him and began to hit the road. 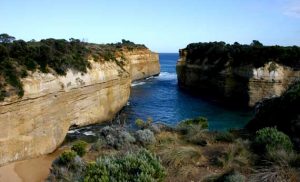 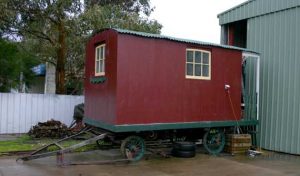 By the time I started cycling a very strong storm came and hit me. The wind was straight ahead and hitting my face. Very strong wind, rain and cold…I knew another very hard day is ahead but I was not going to give up. I was totally soaked and cold but just telling myself the wind will drop, the rain will stop…the rain will stop, the wind will drop…and was encouraging myself to continue. Fortunately after about 4-5 hours the wind dropped and the rain stopped and after that just every half an hour there was shower. However all those showers were enough to keep me wet.

I pushed myself to cover at least 90km and pass over the Heywood which was the last town before Mount Gambier. I passed the town and after about 6km I was looking for a place to camp. I found a nice private road and after getting permition from the owner I pitched my tent and sneaked to my tent. So lovely after that hard day having a safe place to stay and some food to eat and for sure there was a heavy sleep. I didn’t like to wake up in the morning but it was the last day before having 2 days off in Mount Gambier so I packed again and began to hit the road again. 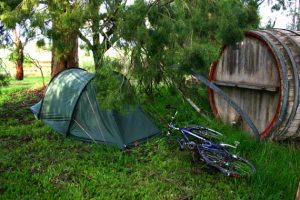 I had 80km within the forest through Princes HWY and it was a easy ride. I arrived to the town about 4:30pm and followed the address I had from Glenys who is my host here.

I will write about here later..