Home EUROPE Austria Cycling from Vienna to Linz along the Danube

Cycling from Vienna to Linz along the Danube 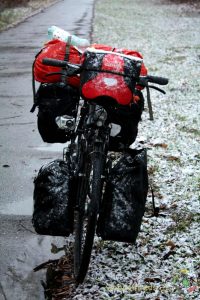 After 3 days in Vienna I was ready to leave again. In fact it was a couple of days with not much cycling. 4 days in Budapest, 2 days in Bratislava and 3 days also in Vienna and I had just a day for cycling from Bratislava to Vienna with James.
if I wouldn’t have even that day then it would be hard again to get fit but having a ride within those days was fine enough to keep my legs turning pedals.
Always when I am going to face a hard ride, I am not in hurry and I let everything goes very smooth and from Vienna I knew I will have some hard days ahead so I was relax and didn’t leave the house early.
a night before I leave I was checking the map with Aurelia to find out which route is better to take, at first I decided to go through Germany and Munich, so I would have a flat road all the way to Zurich which is along the Danube to Munich and then cycling toward south to Zurich, even Aurelia called her aunt to host me in Munich but at night while I was in bed I was dreaming of mountain in Austria where the beauty is lied all over around.
I was thinking which has made me to go through the flat area? A fear? Cold? Mountains and hills? Hard work? Time shortage?  It was all about a fear of shortage of time, cold and mountains and if I am going to give up against the fear? No no….I am not going to give up! I am not to let the fear take my courage or scare me to do what I love to!
in the morning after I woke up I told Aurelia which I have changed my mind and I am going to cycle through the mountain to Salzburg and Innsbruck and Tirol to see the mountain.
again we opened the map on the floor to look and make a route! This time was through the mountains.
we arranged places to stay and she called her aunt in Linz and her friends along the way to put me up for a night or two.
After we had breakfast she left for her work and I began to pack. I was done at about 9:30 and just dropped the keys in mail box before I left.
I needed to find Danube and follow it upstream to the west. But I got lost and I went through the town, where I saw many thing I haven’t seen from Vienna.  I was quite lucky to get lost. Always is the same, I get the best things through what I expect the less. I saw the beauty when I am in hurry and I touch people’s heart when I judge them in advance…it seems that always I have been wrong in my life while prejudging people, life, nature …etc. this is the way I am trying to evaluate my life and understanding its meaning. 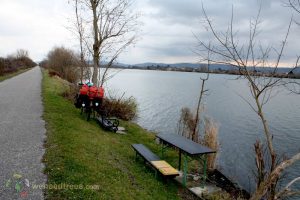 fortunately cycling and going through the people helps me a lot to feel them, touch their heart and see how they are living as a natural creature. I consider them first as a natural creature rather than a mature human being, so I keep a right for them to make mistakes, to do something crazy or even to hurt me.
I am just trying to increase the level of my tolerance which is one of the most difficult part of the journey, in fact having cold windy days or snow or even combination of all of them plus mountains are nothing to struggle with, this is me myself which is the most difficult thing to struggle, my ego, my desires and my selfishness and all the physical difficulties are a way to purify my soul, to make me thinking and to pull out the pain from my heart which has left from the past.
after an hour I was on the right side of Danube riding to the west along the bicycle path !! yes true!! I was riding in a bicycle path and I was honestly surprised how human being could get a long with any new situations. I was the one who was complaining about bicycle paths in Germany and now I was looking for a cycling path!!!
I had 200km to a city called Linz where I could stay with Aurelia’s aunt. So I divided it to two part each 100km , but actually it was for the road not the cycling path along the Danube!! In fact it was 232km if I would cycle along the Danube. So I had to cycle 12okm first day and again short days and lack of time, but the good thing from cycling road is to be safe!! And easily I could ride 3 hours at night with no problems.
the road would take me through all small villages which were lighted at night very nicely. This is near the new year, so people are decorating houses with so many lights which is nice to pass by. 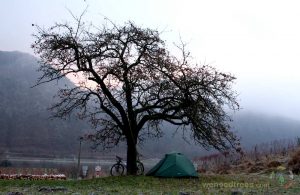 It was absolutely a pleasant ride at night and go through all those little towns or villages along the Danube.
My plan was 120km and exactly at I stopped when my bicycle speed meter indicated 120.
I turned off from the road into an apple orchard and found an apple tree with a flat ground underneath.
I pitched my tent with the care I always I have for my home to put it in the most proper place around.
7:30pm and I was done for the day, I just needed to make an Indian tea, warm up the food Aurelia had given to me, make a soup and sleep of course.
one of the most important way for me to relax my feeling and my mind is eating and shopping. So in the afternoon I went to a big supermarket in Krems and I bought many things to eat, so I had somehow a feat at night.
6am…it was time to wake up, eat breakfast and get ready to start another day.
last night sky was totally clear but increasing clouds since early morning.
I began to ride at 8:30 happily with the weather but the joy didn’t last for so long. Weather changed into a wet one, snow started. It was not that serious at the beginning but it made me already wet. I stopped to change my cloths by the hope which it will stop soon, but it didn’t. I couldn’t wait for it to stop, so I started cycling and snow was harder. 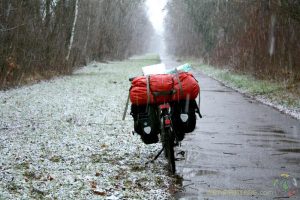 Road was already white and I was actually having so much fun and joy. My rain jacket is not working anymore..it drains water into my inner cloths and soon after I was feeling cold.
My body still was fine but my fingers began to lose their senses.
after 2 hours my right hand had no feeling at the fingers and I knew there will be a big pain while warming them up.
I reached to a point I couldn’t continue but still I had more 60km to go. Honestly was not easy with the head wind also.
It was about 1:30 which I was passing a city called Grien …no way. I should warm up my fingers before it hurts me more.
a coffee shop would be just amazingly good. I found one and I jumped into it. I ordered a big piece of cake with a cappuccino with cream and I sat by the window, still I was feeling hunger to see outside, to see the beauty of life, river, people and sky.
an old lady came over to ask where I am come from and why I am riding in such a cold weather…I couldn’t keep the conversation going on as my fingers began to pain, I would love to be alone to cry but I just could keep them between my legs and press them. 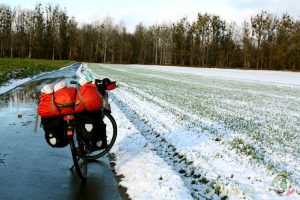 a few min later the big pain was already gone and I could sip my coffee and I could look at the old lady and smile.
she came over with a little biscuit for new year. She reminded me my grandma, the same feeling.
I went for the next cake, still I was hungry and also as I mentioned before eating is  good way to relax for me.
This time she came to take the order herself, I was thinking which one I like the most but the cakes were all nice and looked delicious. I told her just give me one, no matter which one, she can chose herself and I went back to my seat.
she came over with a plate of two cakes. She pointed on one of those and moved her head, meaning this is from me, enjoy it.
I just love her with all the kindness I could see through her eyes.
and it was time to leave again, I gave her my card and told her about my project then she took me to a table to introduce to a man and later she came again with a scarf, a woolen one. She handed to me and said “ it is cold, this can help you a bit !!”
I was back to the road again but with no pain anymore which was great, snow was already finished and the only thing had left was the beauty of clean while color all over around and a pure joy in my heart. 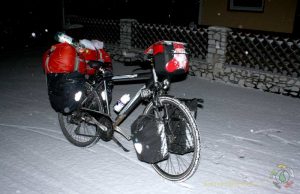 It was dark again and still 30km to ride!! no way….I couldn’t follow the cycling path anymore as it was like a snake and I had to cycle double, so I just left it to a bigger road but still quiet one.
totally dark and cycling to climb a hill and going down, I was very careful with the speed as it was getting cold and the ground could be icy. I never let the bike go itself and I had always break paths touching the rims.
Anette called me to ask where I am, “ more few km to ride” I replied.
There was still more 3 km which again snow began and very soon ground was white. I was happy which I will be at home quite soon, so no worries. Even I could walk if it was hard to ride, so I just took it easy and at about 6:15pm I was standing near the church in Gallneukirchen waiting for Anette to come and fetch me.
Would you like a coffee? She asked! YES please! I answered.