Cycling from Bielefeld to Berlin 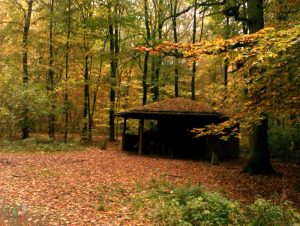 I had 400km to ride to Berlin from Bielefeld. Not a challenging road which I could see on the map it should be almost flat all the way to Berlin.
I was planning to make it in 3 days which was quite hard in those short days but after I could just 110km in the first day I changed my mind and I became to the idea of doing it in 4 days.
I was planning to cycle to after Hanover but I couldn’t. it was quite hard to cycle in German roads as I had to follow all the time cycling paths. Of course it is absolutely safe and nice but for me who is not very familiar with roads and rules in Germany was quite hard as well as the cycling paths were going through the cities while the main road just skirts the city and they are much shorter. I needed to be enough fast.
For me being on the road means cycling hard because it remains me the time I was  a cyclist and always on the road among the cars. I love that feeling and I love to be on the road cycling over white lines. I want to touch it, to see the while line going under my tires, I want it to be in front of my eyes what I was missing while riding in cycling path.
anyway I didn’t much care about it and I was cycling in the main road most of the time. But once a police car came and stopped me. They told me I should return and go through the city and follow the cycling path. I pushed my bike a little while but as soon as the police was gone I jump on my bike but toward the city in the wrong direction. Another police car came and stopped, driver who was a lady was staring at me with such an angry eyes, I just asked” It seems that I am not supposed to ride in this road, so how I could get to the old road? “ she was still looking angry but the man at her side answered kindly, “ ride directly all the way to the third traffic light and then you will meet a big junction. Turn left and follow it all the way to Minden !” I smiled and continued riding and the lady was still silent staring at me angrily.
Anyway passing through each city was the same story but luckily after Minden there was not many big cities and I could easily follow the main road and avoid going through the cities.
The first night before Hanover I was looking for a place to hide and camp because I am not allowed to camp except camp sites.  It was almost dark which I found a little road going through the forest and I followed it into forest. Sky was full of cloud and very possible to rain, so I should find a shelter to avoid of getting wet.  In the middle of that little forest I saw a shelter with a bench and some seats under neat.
There was another cyclist also, a man with around 50 years old. I asked “can I put y tent here?” and he answered “ yes”.  It was quite good to have a company that night but he coluldn’t speak English at all. So  I just had to keep quiet to do not disturb his privacy.
I was again back to the nature where I am belong to and darkness was perfect to keep my eyes  from everything and let my imagination to make pictures out of any sound. 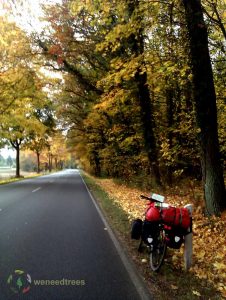 I made a coffee and eat my dinner which was some ready food !! I usually don’t cook because I cycle a lot during the day and I need more rest at night. I just find something very simple or eat outside and while I am camping I make coffee a simple food and I sleep. Sometimes 10 hours sleep is wonderful to have.
In the morning when I woke up that guy was already awake and he was eating his breakfast and quite soon he left.
I began to cycle again but weather sill was cloudy and not that cold.  My cloths were fine but I didn’t have a rain trousers with me and my mind was a bit busy which if it rains then I will have problem.  I do believe which I get what I need in my journey and if I don’t have a trousers means still I don’t need it but my mind was not accepting and finally overcame on my believes. In Hanover I went to a bike shop and paid 50 EUR for rain trousers which were quite expensive even though I bought the cheapest one.
( I should say that still I didn’t use it and I didn’t have rain till now ).
I was passing a city called Mindi which a guy introduced me a way along the river for cycling. If I would take that road then I should totally change my way toward a bit north and get out of the main road which was a nice idea to avoid traffic and cycling path!!
but again I got lost in cycling path!!! And I spent quite long time to find my way back to the main road.
Anyway finally I was in the main road and I was trying to covering longer distance. I usually provide some supply in the evening just before I am going to camp. That night was the same and I didn’t buy anything in the afternoon. I was approaching sunset and still I couldn’t find any shops, or any bakeries.
120km cycling and nothing to eat for dinner!!! It was totally dark that I found a place for camping near a lake just by the side road.  Not that funny to have just a coffee and a little bit of muesli which I had to eat them with water instead of milk !! but at least I had so much time to sleep and read my map. When I was reading the map I realized which there is just about 200km to Berlin, so I decided to make it in one day. I knew which I cant do it but my target was 170km and take a train for the last 30km as also it was near the Berlin and so crowded. 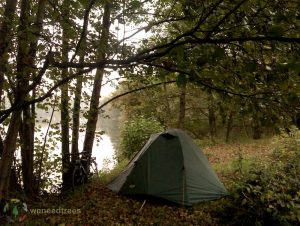 In the morning I had just only a cup of coffee and started cycling by the hope of having food soon after I found the first shop.
I should cycle 9 hours by average of at least 18km/h to cover 170km which was not easy.
After 10km I arrived to Wolfsburg and a bakery but I just thought there might be a bigger one or nicer one ahead and I ignored it. The next bakery I found 100km ahead around 2-3 pm.
I was hungry like a pig and in a minute I ate a big cake and a sandwich with 1 lit of cacao milk.
From morning I passed several cities and small villages but I couldn’t find any shop there. It made me compare west of Germany with the east. In west there was so many shops and a center in any small city but here I even couldn’t see any person on the street.
It could be also because of cold and changing weather but it wasn’t alive the way I expected.
I didn’t have any time to lose, I had to work hardly and I was doing. My body was responding quite well and I was fit again.
I like it to push myself sometimes. It helps me to become stronger in my mind. It is like a point I decide to achieve and I just do it. Every day I could touch the success and after a while being succeed has to become a part of my personality. When every day I have a target and I reach to that target, then I get used to achieve my target. No matter how big it would be or what!! I should reach it.  That’s why I love some times to push myself and work hard like that.
After I arrived to Rathenow I should chose which way to take and I decided to go to Brandenburg which has a bicycle path along the main road. It was getting dark and I should be more rational and thoughtful, so I shouldn’t risk and be on the main road at dark.
Anyway some part of the road didn’t have cycling path and it was honestly scaring to ride a bike but no way !! I should do it and nothing could stop me.
finally I was in Brandenburg at around 7 and I called Sussane to inform which I am coming Berlin tonight.
I took a train for last 30km and I was in Berlin, tired and hungry…