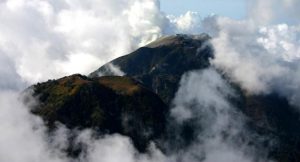 As I wrote before I had someone to host me in Jakarta who is Arianne, a Filipino lady living in Indonesia. When I lodged my documents for Australia and New Zealand, I had plenty of time in Jakarta, so she invited me to accompany her to a trekking program held by a group of people working for Conoco-Phillips.

The mountain we were going to climb is a mountain in East Java called Mount Arjuna. A 3339m volcano near Malang city and about 1000km far from Jakarta.

We left Jakarta on Wednesday afternoon by train to Malang, about 18h traveling by train.

Right after we arrived in Malang the following morning, we went to a member’s family house to prepare our stuff and then we rode the cars to go to the point where we were supposed to start the trek. Due to heavy rains in the area the few days before our climb, the trail that we were supposed to take was closed to trekkers and we had to change our route, so we took the longest route which was a route specially for pilgrims. But it was nice because there were many temples along the way.

We walked at night for a few hours until about 11pm and then we camped. By the following morning, we left camp for the summit at 8am. Having a delay of about 2 hours from our original plan to start the trek in the morning was a reason to be behind our schedule and just after few hours trekking the members of the team found out that there might be not enough time to reach the summit before dark so they decided to return to the camp, but they told us to proceed with the climb if we want so I went ahead because I want to see the summit and the Java sea from above. It was not easy for me to leave something in the middle of the way. So after I got permission I left the team for summit. Arianne also followed me and we walked for summit. After about 15 min walking we saw 2 other members of our team, Mr. Phil and Mr. Masood, who were walking ahead and were happy to accompany us to the summit. We went to the summit and had a nice view from there of the Java sea and the volcanoes of Mt. Welirang which looked just nearby the place where we were standing from the summit of Mt Arjuna.

On the way coming down we were faced with heavy rains and darkness and it was a little bit complicated managing the team and the porters who were carrying the bags. The porters did not have flashlights and headlights and they were also very wet, did not have dry clothes and hungry and it made them a little bit tired and disappointed to continue. However they did a good job and we arrived at the camp about 9pm ready to have a nice rest. On the next day, the team left Malang for Jakarta, but Arianne, Agust and I had one more day to visit Malang. One of the things which is famous in Malang to see is the apple plantation.

We went to the apple plantation, but it was really funny for someone like me who has too many apple gardens in his hometown to visit. We paid about $4 entrance fee to see the apple trees, this included the privilege of picking 2 apples from the trees!!!!!!! 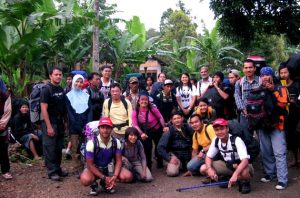 However it was nice to see. I am also happy to meet new friends who like me love the outdoors and mountain climbing and I would like to thank my new friends from Conoco-Phillips outdoor team (Pak Yanto, Pak Handjiono, Andhika, Redo, Diah, Stephanie, Anti, Tanti, Yuvid, Ilham, Mr. Masood, Mr. Phil and Agust) for allowing us to join their climbing trip.

We came back to Jakarta and still I am waiting for the result of my visa request. So let’s see what will happen