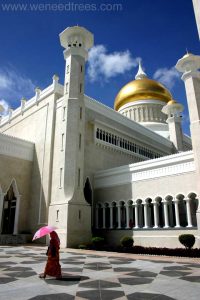 When I arrived to KB I still had no direction of where I was going to stay. I didn’t have any email from Sue who I was going to stay with, so I just was hanging around. I send a text to Paul who I met on the road in Sarwak and we fixed a time to meet in the evening. I had still time to hang around and waiting to hear from Sue. It was about 7pm and I had more 15min time before I meet Paul. I just slight to a cyber café to see whether I received any news or not from Sue. Fortunately she had written back to me and I had a very detailed direction to her place. So now I had a place to stay.

After I met Paul and his wife in a riverside restaurant and a very pleasant chat with them I cycled to Sue place. A house full of antique stuff and some lovely lights around and a very comfortable room and a licking dog!!! Called Eskie.

It was so good having a vey comfortable place like that after a long time sleeping everywhere and eating everything…now I could have some food I really like and enjoy cooking as well. Sue is a very active and positive person who is full of energy and talkative. She invited some of her friends to come and have dinner for following nights which was kind of her and finally she organized a school to talk in KB for me.

Kb is a very small town which has just a small street as down town and actually no more entertainments and I just spent almost all the time at home enjoying a comfortable house. I have been riding almost everyday and meeting many people and now I really needed to do nothing and just sitting and giving my mind and muscles some rest.

Just I spent 2 days at home and I had some few short ride around the town and some meals outside. I left KB at 1pm after I finished my workshop and tree planting in Penaga school and began to hit the road toward BSB ( Bandar Ser Bagawan ) which is Brunei capital city.

Brunei is a very small country and from one side to another is just about 120km but is a very clean city with people who are very concern about driving, it was one of the safest country I have cycled through. Drivers are too careful about pedestrians and you don’t need to look for cars….just cross the street and be sure all the cars will stop for you while in Kinabalu you can be a target for drivers and they look at you as a point they have to hit .they push the gas when they see someone is crossing the street to push him/her out from the street.

I tried to manage another meeting with Paul and we talked on the fone for few more times but sadly we couldn’t make it and I left there.

I arrived to BSB around evening when a heavy rain started. I sneaked under a small shelter waiting for rain to stop and then I followed the direction my friend had given to me to reach his house.

It seems like a forest where he is living and a bit far away from all city noises and just quiet. I cycled up to his place and the last 200m was a steep which was not very pleasant climbing that hill after 120km riding in half day.

I staid in Pauls house for 2 nights. I was planning to take a boat to Kinabalu in Sabah and no time to cycle there. Also if I wanted to cycle then I had to cross the Brunei again and go to Sabah and again cross the Brunei and my visa was single entry so I couldn’t make it and the boat was my only option. I was walking around the beautiful mosque in BSB that I met Gorge and Mo 2 German guy who were hanging around. We started to talk and chat and then we continued walking together through water village.

I called Paul and asked him if he can put the German guys up in his place and he kindly accepted. So we went all together to his house in the evening after Paul took us to show around and visiting night market. In the following morning we had to reach to the port at 7:30 and I had to cycle there. A short ride for about 25km.

We left house all together at 6:00am and they hitchhiked and I cycled so we almost reached to the port together. there was an hour boat ride to an island called Labwan and from there 3:30 house disgusting boat ride to Kinabalu.

The second boat was just disgusting. We couldn’t get out from the cabin and there was not enough fresh air inside and moving boat was making me vomit and a stupid lauded action move was just disappointing. Anyway there was no choice and I was just waiting to reach and have some fresh air and breath. we split in the port and I followed the address Kuni ( my host from CS in Kinabalu ) was given to me and after a short while I was there.

We had just dinner outside with 2 other his guest from Au and I slept soon after we arrived home. On the next day we decided to explore an island around the KK. Kuni and I went to the island ( I have forgotten the name ) fro a half day trip. I slept almost all the time I was there on the beach listening to the sound of waves enjoying peaceful atmosphere there.

Today is my last day in Malaysia and in fact in South East Asia and hot weather. I am going to leave tomorrow morning for China which has cold weather now and there would be different place as I had before.

Today I did nothing and just some swim and doing some work on internet. I feel I hav eto stay at home and just be relax….I will have some tough days in China and I have to save some energy fro that. The only thing I like to mention here to remain it in my memory is an email I received from my friend Mehdi who mentioned about another friend of mine who I had no news from him for a long time. It was so nice to receive that email and just thanks mehdi.