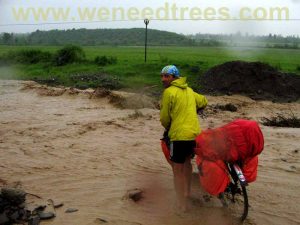 I was again on the road…it was my 4th day of cycling after Tbilisi.

there was no rain anymore, sounds great and I think it was my last rain till the next rain season which I am not sure where it would be. May be in china…? Who knows?

I was cycling in a road between mountains and the fields which was so green and after that heavy rain it was so fresh as well enjoying the sounds of birds.
Actually it was time to start discovering Azeri culture even though there is almost 3 million Azeri leaving in Iran. So I already have got to know their culture a bit but here was another experience to gain and more to learn. Every few km there were some people sitting on a table under shade having tea and roughly 90% of them were asking me to have tea with them but to be honest if I would accept them all then I couldn’t cycle even 20km each day, so I just refused many of those invitation and accepted once in an hour or two. 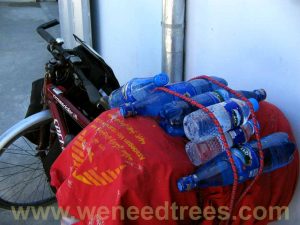 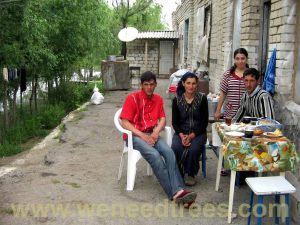 After trying different places I found  small cabin side the road. I asked the lady there if I am allowed to sleep there or not and it took me about 40 min waiting till I could assure her I am not like a stranger. Then I could have their trust, her son came over and with a tea.
I went inside the cabin but it was hot inside and no fresh air, also the ground was wet as the dogs seems used to pee there. So I put my tent hoping there won’t be any rain over night.
I had a cool night but just barking dogs almost half the night before my tent was bit bothering.
I had breakfast with the family in the morning with the family before I left.