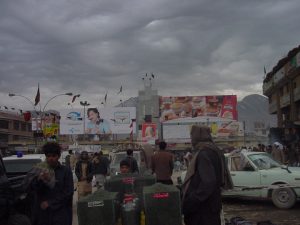 After Zahidan I went to Mirjaveh the border between Iran and Pakistan . I made the calls with my friends and family due to after that rhere was no booth to call and aslso in Pakistan the call coast much money .after crossing of border I saw a different place in comperiance to Iran .the first problem which I had was the opposite driving and it confused me , also in Quetta at the first day I was so close to accident several times . in Taftan when I wanted to take some pictures people surounded me and it was intresting for them digital camera and other stuff .there was a man who help me to put my bycicle in good situation on the top of the bus and I brought my stuff to inside . saving stuff is very important due to if you loss them then you will have so many problems .the road between Taftan and Quetta in awful . I dont know why the goverment of Pakistan dost care about this region .a thinny road ful of wholes , if a car cames tward you it is impossible to cross on the road . yove have to go out , becuase there is place just for one car . I was recommended to avoide of eatting on the road , also in Iran it is .there was something like restaurant but not suitable to eat . during the trip I found a friend on the bus. most of people where intrested to talk about my trip on bike .I arrived to Quetta about 1AM and it was defficult to find a place to rest .almost all the hotels where closed , so Dad Mohammad invited me to his house but police stopped us and asked me my passport . then he said that Dad Mohammad is not allowed to host me and I had to find another place to stay .my friend help me to find Iranian cultural house . in Iranian cultur house they had really good and warm manner and they provide me dinner and tea and also a place to sleep . so I am so tired and it is very nice a place to sleep due to from Mashhad to here I couldnt sleep so well .