Workshop in International school in Geneva 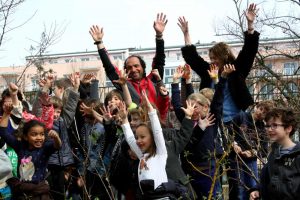 When I was in Geneva at the first time, I just passed by the International school and I left my visit card there at the reception. Honestly I was not expecting a lot to have any response but I received an email after few days from Marcia Banks who is vise principle of primary school. I was already gone but it was kind of motivation for me to go back again to Geneva. after I returned from Turkey, I took my bike and I started cycling toward Geneva and I was there. Marcia kindly invited me to stay with them. they were lovely and I had a wonderful time with them.

on Friday 21 of March I had my full day in school visiting 7 different classes which Marcia has her note under this text. many thanks to her for all her support and kindness. Mohammad spend a full day at LGB Primary School (Geneva), going from classroom to classroom, sharing with young children why we should value trees. The comments and visuals added value to what the children had studied or will soon be studying. The photographs of some of the places Mohammad visited fascinated the children as well as the adults.
His story and way of life intrigued the six to seven years olds who wondered how he could bath and whether Mohammad would need a larger bicycle when he grew up. For an eight year old, Mohammad’s tales of some of his challenges, such as facing this winter’s cold, prompted the young boy to retrieve a book on the explorer, Mike Horn, to and come forth after class, and to share this with Mohammad. After visiting almost 200 young children that day and planting a young maple tree on the school grounds with the six to seven year olds, another group of children benefitted from his story. 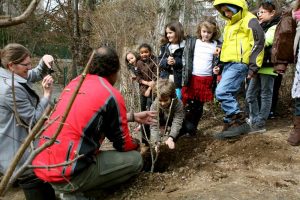 A dozen middle school children came the primary school, after school hours, to work on a project and were soon mesmerized by Mohammad’s story and pictures. Their project was for another day! It was a day that got some children to start thinking about the value of trees and the passion and love one can have for appreciating what nature has to offer us. Adults and children were moved and impressed by the photography, Mohammad’s story, and his kind and respectful demeanor. I am sure there will be positive ripple effects in the future, of the time Mohammad spent at the school. Marcia Banks I heard from my daughter’s friend who works for Reuters and who is Iranian.
She works in the USA, now, but it was not easy for her to get her visa. She writes: “Visas are so hit or miss, and as an Iranian, it’s pretty unlikely he can get one. The US is really playing hardball with Iran and unfortunately people like Mohammed are the collateral damage. I have Swiss and Canadian passports so it was much easier. But I’ll let you know if I have any other ideas, I’ll also talk to my mom, she’s gone through the process too.” So hope you are fortunate and get that visa! Many, many thanks for spending time with us in Geneva!
With my love,
Marcia