“If we are to teach real peace in this world, and if we are to carry on a real war against war, we shall have to begin with the children.”

I first learned of the Iranian cyclist Mohammad Tajeran in 2006.  I’d stumbled onto his website after setting out on a three-year, 25,811-mile bicycle journey through 33 countries around the globe, where I would volunteer along the way.

I learned that Mohammad also had a dream of cycling around the world — planting trees along the way.  Instantly recognizing him as a kindred spirit, I began to correspond with him. Deeply disturbed by the political threats and hostile rhetoric between our two countries, we both recognized that beyond our countries political differences, we each were part of something larger — this one human family. After a year of emailing back and forth, we decided to meet in Malaysia and create a project for peace.  Instead of furthering the problem, we wanted to become part of the solution. So we set out to ride together across Northern Malaysia in a symbolic gesture of peace between our two countries: America and Iran.

When we had completed our journey together, we planted a tree for peace. And while this simple peace project may seem minuscule compared to the larger political problem at hand, it had subtle, and sometimes undefinable, effects along the way:  “But you two are enemies?” a Malaysian woman commented after meeting us.  “We are not enemies,” Mohammad exclaimed confidently, “we are friends.” With that, the woman disappeared inside a nearby village, and returned with two fresh-baked pastries, then placed them in our hands, stating simply, “We here love peace…”

When Mohammad and I parted ways some five years ago, we made a vow that would ride again.

That time has arrived.

Beginning in late spring of 2013, Mohammad and I will reunite, to ride together on a bi-national peace project on a much larger scale entitled, The Iranian-American Wheels of Peace Children’s Art Project. Together, we will collect artwork from children of Iran and America, each created with the theme of peace between our respective countries.  Then we will ride bicycles together — first across America then across Iran — carrying the artwork digitally so we can enlarge them to immense size, (10 feet high, by 7 feet high for each piece) to be hung side by side, in public art displays in cities and towns of our choosing across each nation. We will also meet with children and larger audiences along the way to give presentations in selected cities. Of course, we need your support. We will be seeking assistance to tend to physical tasks (mainly around the artwork), as well as large and small scale donors to donate funding for this project, which will include, airfare, bicycle-traveling costs (camping, food and supplies), the digital transfer, enlargement, and printing of the artwork, as well as hanging supplies, and the cost of paper, glue and materials.  This is truly a chance for people to get involved in a positive project promoting peace and understanding between Iran and America.  In the months to come, we will mount a full media kit and a Kickstart.com project describing the full details of the project. I hope you’ll join us! 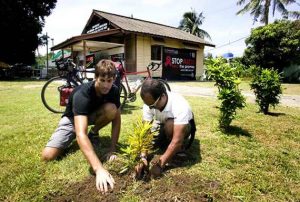 Rick Gunn while riding together in Malaysia