Tree Planting at the Pio Baroja Institute of Irún 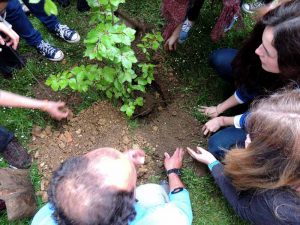 Lien, Ingrid’s daughter, organised a workshop at her school for me. Her english teacher Ana responded positively to her request of letting me have this workshop and tell students about my work as an environmental activist and cycling traveler around the world.
So on thursday the 18th of April Lien, Ingrid and I went to her school, which is the Pio Baroja Institute in Irún. Her teacher was so enthousiast about the project that she was already waiting to receive us at 8.00 in the morning at the entrance of the school.
Students of Lien’s age (17 -18 years old) of the artistic and humanistic grade were regrouped for a first workshop, in which 2 english teachers were present, Ana and Pilar. They were all so involved and enthousiast about my intervention, that inmediately after a second workshop was organised, this time for the students of scientific grade. They seemed to be most interested in what I was telling them and were very touched by the video I showed them. They were listening in such an attentive way, that it was a pleasure to see them. They got involved and started asking many questions about my journey. So nice to be able to pass my illusion for travelling and making a dreamcome true to all those young people.
After the second workshop, the students wanted to plant a tree in the patio of the school, but as the director wasn’t there that day, no permission to do so could be given. They got upset about this, as they really wanted to plant this tree, and started commenting that this was absolutely incredible and they could not let a 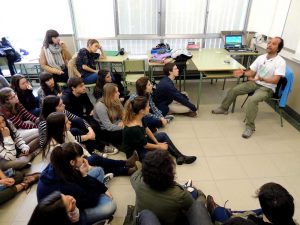 possibility of planting a tree with an Iranian activist just pass away. They were going to write a complaining letter to the director. So… finally Ingrid, the english teacher and me decided to go to buy a tree by ourselves in a nearby flower- and plants-shop. We bought a nice Fagus Sylvatica and brought it to the school to plant it together with all the students.
But before being able to do so, some of the students came to ask me if I wouldn’t mind to give another workshop… They were very willing to assist once again, even if they already listened to me before, and insisited on having another session, this time for even more students. So there we went again, back to the third floor for a third workshop. There wasn’t enough place for all the students to take a seat, so they just started taking place on the ground. It was so funny to see that the floor was full of people already when they still kept entering and entering. Another enthousiastic class and another hour of exchanging with fantastic young people, ready to help make a change in the world.
Afterwards we finally went to plant our tree in the patio of the school, in which all the students were most interested in giving a helping hand. Another tree in another school, and one more seed planted in the heads of these young people.
Mails were exchanged and several students wanted to know how Ingrid and I got in contact and were intriged on how hospitality is working between people who 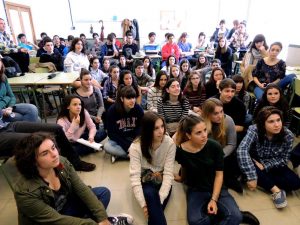 never met before. So Ingrid explained them about the principles of WarmShowers.org. A little light started twinkling in the eyes of a couple of boys, ready to make their dream come true, go out there to discover the world and enjoy the freedom traveling by bike provides.
Thanks to Lien for giving me this opportunity, and thanks to the english teachers Ana and Pilar for accepting my intervention. 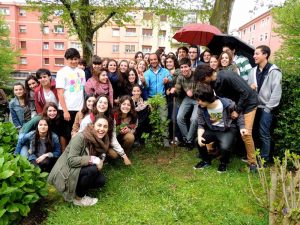