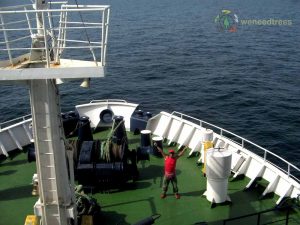 I look at my passport, already was stamped and I was inside the ferry looking at Baku which started being illuminated by all those colorful lights. There was some kind of peace again in my heart and such a joy and excitement for the journey I had a head to cross Caspian. I love sea, I love ocean and I really love endless horizon and now I was going to cross the Caspian where I could have endless horizon at least for 24 hours. The ship left port at 1am..I chose a nice cabin which had a window to the sea with nothing in between to disturb my view. I can even sleep in the stable but if I have a chance to be in a nice place I just try to be in a perfect place. I spent most of the time outside looking at the sea, for me it was like a chance and I had to enjoy every single moment.
Since I started learning how to live in present time always I feel this is the last minute of my life. So if it is the last minute enjoy it as much as possible, just appreciate it and indeed I did. 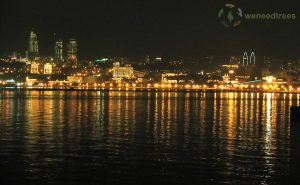 out boat reached the harbor in Aktau around 10pm and I called Andrew ( From CS). I estimated to finish our administration work in 2 hours and I told Andrew which I will be at home late at night. But boat kept us waiting just near the harbor and we reached it at 12. I was expecting to walk out and to pass through the custom but I found out an officer will come to pick us. I was waiting and didn’t even sleep because I didn’t want to someone come and bother me. So I preferred to stay awake waiting for the officer. She came at 5am!!! I was so tired and sleepy. Again I had to face with some kind of custom process in a very Russian style like movies. There was a bus and they send us to the passport checking by bus, then again they checked my bags and again I had to come back to the ferry to pick my bike and again go through another process which was a bit boring, especially after 5 hours waiting in the ferry for passport checking. It was very early morning and I took a road which guided me to the city. I knew I will have around 45 min to ride to reach the city. Sun rose and I was blessed watching it while rising to bring some light and heat to the life. As soon as I entered into the city I found it so nice and peacefull…a city stretched along the Caspian. Many people I saw early morning running or walking outside and I could feel their peace. I was so happy to be here in Kazakhstan. Since the very first moment ( just out of custom) I began to love this country. Always to have the first impression from the people I ask them for an address. It is so easy to have a basic feeling about people in a way they answer even though it cant be always true but this is how I try to get closer to the people. If the first one answer in a nice way or even second one the same, still you can say everyone is like that but when 4 people answer in the same way which was so friendly and nice means they are lovely people. And I was absolutely right. I was at home tired and sleepy. I just needed some rest, some sleep. 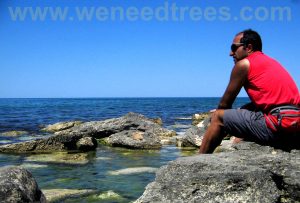 I was planning to stay 1-2 days in Aktau and decide where to go but Kazakhstan is so huge and hard to decide where to go..no way I should make a plan. I just kept waiting for some sign to help me finding my way to cross Kazakhstan. I had some choices, going through South or the North and I had no idea how either of those ways looks like. Again confused and searching for a sign to help…also I had to manage my way somehow to be in the certain time to either Almaty or Astana to apply for the next visa before my current visa expired. I decided to take a train to a city and start cycling from that point. I packed and I left home but there was no train that day. I began to cycle…the first city was Beinio which was 480km on the east and a very bad road through the desert. I cycled almost 40km that I met an Iranian living in Kazakhstan. He invited me to his house and told me about the road which is reall bad. he told me there is a train for Beinio every hour and I should take that train. So I cycled back to the train station. I jumped in to the first train without ticket. it was crazy..I had no seat and I had to sit on a small bench for 8 hours. But a guy came and he gave me his bed to sleep for few hours. I arrived to Beinio 7am but there was no train for the city I thought it would be nice to go through. 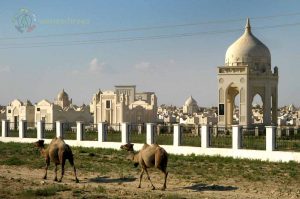 It was so hot in that city and windy, a city in desert with lots of sands, wind and heat. Not pleasant at all especially when I had nowhere to rest. There was no train for Astana or Gezelorda where I had possibility to make a plan one through the North and the other passes through the South. Still I had no plan where to go and how to cross Kazakhstan which made me more confused and I had to follow what is happening itself. There was a train for Gezelorda where I most likely would cycle through for the next day, but the heat and dust and also not having a certain place to rest made me tired, no way to wait for tomorrow. I found out there is a train at 8pm going to Aktube which is city 1000km on the north. I just wanted to get out of that city, but no ticket. Every 30min I kept asking the cashier about ticket and she was telling me niet!! Which means NO. I could get another train from Aktube to Gelezorda but for that time the only thing I was concern about was getting out of that city. I sat in the train station all the day. A 5 years drunk man invited me to have lunch with him but I was bored and tired and not enough courage to accept his invitation. finally it was 8pm and I jumped into the train with no ticket. of course I had no certain seat as well. But at least I was out from Beinio.