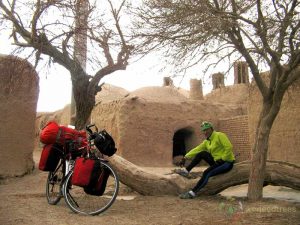 After I arrived Qaen I had to take a day off because of my legs which were so cramped. I haven’t cycled for a long time and it will take some days for my legs to be in real shape again. whole day I was at home ( a friend of mine has a house there and gave me the key). It is so good sometime to do nothing..just sitting, sleeping watching movie and of course doing my work. It was almost an easy day to cycle to Birjand. Just 100km but some hills. I was getting better and I could pedal a bit faster and with better rhythm.
In Birjand I stayed 4 days…my mother is from there and so many relatives I have in Birjand, 5 aunts, ankle, and cousins and also so many friends. So 4 days was almost nothing to meet them all and after I left Birjand still I was receiving calls telling me “ why did you left so quick? We still haven’t met !!!” but anyway I had to leave, no way!! I cant stay somewhere that long. Hasan Khorashadi who is also a cycle tourist from Birjand accompanied me for some km to get out of the city and then again I was alone while I was so excited. The dream was going to come true…I could cycle through desert and I could camp in desert and enjoy the beauty of silence and loneliness in desert.
I was actually in hurry…I would like to be out middle of nowhere as soon as possible but I was to be patient…This is so important for me which while I am heading to a love, I should walk slowly to feel every moment of that joy. To enjoy every single moment of that feeling and now again I was cycling in to a pure love. In to the nature but in a different form also one of the most beautiful one….DESERT!!!

Where your eyes can go forever and your sight has no boundary, the horizon is just endless and it has no move. While you look at the sea, you can see the waves but here nothing but your heart which can move and take you deep in to yourelf. First day I cycled almost 70 km because of very strong head wind.
It seems that desert wants me to understand in which way I am heading to be more conscious and understand the value of the place I am going to pass through. At night I arrived to a very small village which almost has no habitants. Just 7-8 old people who still are living and holding the lands. Some has few ships or goats but most almost has nothing. A very narrow and small stream which they still can drink water but no farm.
drought within last few years pushed them all away and most of them already has migrated to the cities. Mr. Kermany a 70 years man who lives with his wife invited me to his house. Actually I was going to pitch my tent but they told me it would be bloody cold at night and you should come in!! his wife was away to visit their son in Birjand and he was living alone for the moment. everything was so simple…fortunately technology has no access to this kind of life but the truth is this kind of life is going to wipe off in a very near future. The old people may keep it but the young ones have no interest of living this way. It is quite sad to see how the culture is missing but honestly they also has right to have those opportunities people have who live in cities.
Not exactly the same but at least somehow!! A very simple food was our dinner. I was inside the room that I heard Mr. Kermani is talking loudly. I thought there might be someone coming with him but later I found out he is talking with himself all the time but very loud. Living alone made him to make a fiction mate he always talk to !!! he kept talking with his imaginary mate about his son who has died because of electric shock while he was working. 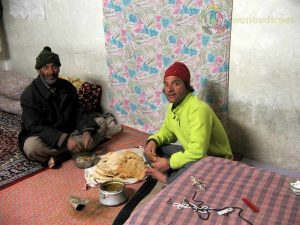 As he said it was the only pain he has and he is going to carry that pain forever…simple life make him to have real pains. somehow it can be consequence of living that way in the nature. I left him in the morning and I began to cycle in a flat road under sunshine. It was a bit cold but still fine. But that nice weather didn’t last so long. Dark cloud appeared and suddenly storm and rain. It was the first time this year there was rain!! In desert. And of course I had a very strong head wind all the day. It killed me.

At night I arrived a village called Arababad. Some ruins where in the other side of the road which has remained from earth quick some years ago..no one lives there anymore and it was nice spot to camp. Some trees around and vegetable courts were along with those ruins. I found a nice spot behind the trees where I could be sheltered from the wind. I had a tough day and of course chilly night as well. My water bottles inside the tent was a piece of ice in the morning. Fortunately when I woke up everything was so calm…no wind. 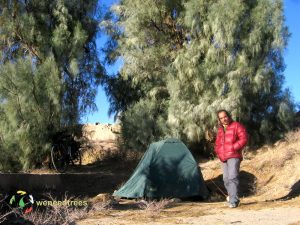 It was so good to know that. having tail wind in a flat road was a wonderful thing I could imagine to have and I had. Just in between I had 30km head and chilly wind while I was passing through the mountain after Deyhuk and again tail wind and down all the way to Tabas. such a beautiful feeling when I can overcome on a hard work…I love this life. I can see victory every day.

I can overcome on difficulties every day and in future it will make a ever success personality out of me. these days are all some kind of personal training. I am in Tabas right now going to decide where to go…I may go toward Robat Posht Badam and then turn up to Khur. I may have 50-60 km more to ride but fine. I will enjoy one more day in desert. just for next 2 days I have nothing…no water, no shop, no village but sands and endless horizon.
6 Jan 2012