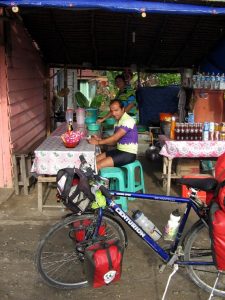 I left Pekanbahru about 9:30 due to I had to change some money and I was waiting for the shop to open. I began to cycle ahead to Bukittingi which was a town in the mountain and 220km far from where I was. As I heard before the road was just beautiful and very nice. It was narrow like the road between Dumai to Pekanbahru , but really it was beautiful. In fact I was going to come to the center of Sumatra and getting closer to the Equator.

From the childhood always I was thinking how the Equator can be looks like? And always I imagined it exactly like a line on the ground and it was a dream for me to see the line from the close and now the dream was going to become true.

On the first day I cycled about 110km. there was just some light rain and no sunlight. It was cloudy and cool. Everywhere was so green and full of trees. And people are wonderful in Indonesia, they are very friendly and kind. Everyone gave me a sign and they all smile and say hello to the passengers. Just I had some short stop for eating.

From the afternoon the steep road began and the hardest part of cycling in Sumatra started.

My bicycle is so heavy now and I cant loss the weight, I need whatever I have and now I have about 50kg weight including bicycle. Climbing with such a heavy bicycle like that is a little bit difficult, but there is no another way just I have to push a leg and pull the other one to turn the wheels up to the hills.

About 5:30 in the afternoon I was looking for a place to stay at night that I found a restaurant which was specially for truck drivers and a small mosque beside that. I asked them for permition to stay at mosque that the guy showed me a room inside the restaurant and told me I can stay there at night for free.

The room was for truck drivers to rest, but it was more than fine for me. I left my luggage there and I took a shower in the toilet ( I am use to do it…) and then just had a nice dinner in the restaurant and after that just sleep.

I went for sleep so early, about 8:30pm, but the restaurant was working 24hours and it was busy till midnight. However I was enough tired to dont feel anything and just sleep. I woke up by 5am and after breakfast and fixing the broken spoke, I began to hit the road again and in the other side sun was merging to shine and light the earth.

From the beginning I had steep road and I didn’t have any time to warm up, however it was my mistake and I had to warm up before, but I didn’t and it made cycling difficult in the very steep road. Just about 50km steep and I had 110km to cycle. After 6 hours cycling I had cycled just 50km and there was no hope to reach the town by the same day.

I had breakfast very early and from 11am, just I was telling myself, ok after that steep I will stay to fill full my stomach , but it was not finish steep and just climbing and climbing….

Finally about 2pm I found that I can not tolerate hunger and I stopped by the first restaurant and ran to eat. After lunch I stopped somewhere to take a picture and when I took my camera from my bag, I saw that the screw is broken and I was so lucky to see that, otherwise I would loss the bag and camera. The raid oxidized the screw and just it cut. I found some iron wire there and fixed it. After that I felt that the carriers are not well and it is hard to control the bicycle, but I couldn’t find the reason.

Just when I stopped for the room and I was bringing my bags to the room, I found that one of the handles of my bag also is broken. It is the result of cycling under rain forlong time. Just today when I went to a workshop to fix the carrier I found that the other carrier also has cut screw and it was very good to see that, so I fixed them again and also I fixed my bag and they are ready to work again. Fortunately after 4km the steep finished and everything became nicer in my eyes.

I tried a lot to finish the road, but just 20km remained that the sky became dark and I had to stay. I found a mosque and asked them to stay there, but they told me I cant do it.

I came back again to the road, looking for another mosque. But suddenly I told my self :hey Mohammad, lets do over do yourself and just go to the town. It was really difficult, I was so tired and my muscles were cramped. There was so much Lactic acid in my legs and my blood didn’t have any thing to feed the muscles. Just it was hard and hard….but I like to overdo my self sometimes. It make me more stronger. Last 10km was a little bit down slop and in that time it was like a big gift for me.

I arrived to the town about 8:30pm and began asking about a place to stay. I found some but they were not good and didn’t feel comfortable there, so I tried more and finally I found a nice room.