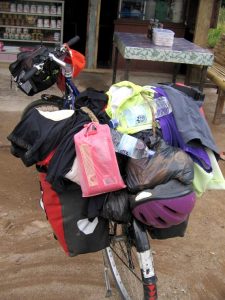 From Palembang to Jakarta I had 5 days cycling and 4 nights to sleep. The first night I slept in a petrol station, took shower in the toilet and had some small food to eat. The second night I stayed somewhere to ask people around to let me to pitch my tent. There was a carwash nearby and a guy working there told me I can stay in his house. It was great and after having shower we went to have a simple dinner in a simple shop. There were some people there and they were interested to talk but as there was no word to communicate I preferred to come back to the house and sleep.

When we came back home suddenly I found myself surrounded with about 15 smoking guys looking at me trying to use of what they knew about English. Of course I had to answer them and tell my name and my country several times and for every single question. However that night I slept there and hosted by too many mosquitoes. Several times I woke up to apply repellant but it did not work at all. On the third day I was happy without any reason and just I was happy.

In the afternoon I wanted to buy some stuffs for dinner and also find somewhere to sleep. I went to a supermarket and suddenly I felt that I like to celebrate tonight with those people that I dont know. So I bought many supplies and headed to find a place to stay the night. After few km riding I found a petrol station and as always it was a reliable place to stay at night. Fortunately it was not 24 hours and just after 10 at night they closed it. The family living there were very nice and they allowed me to stay there at night. But it was not all I was looking for¦.it was about celebrating my joyfulness. In that day I saw many trucks carrying some kind of potato and I would like to try the potatoes.

Also when I was in the supermarket I would like to buy a can of sweet milk but I forgot to buy it, and After I took a shower, the family gathered around me and the man brought me a plate of the same potato that I would like to try and I brought out what I had to eat to share our food and celebrate. I had some biscuits, fruits and ¦.so we shared them. The man then asked his staff to buy something and when he came back I saw that he had bought a can of sweet milk for me!!! What amazing gift. Exactly what I wanted earlier. After that they went to sleep and I sat in front of my room listening to the sound of the rain having a nice coffee. I have two chains and usually after every 1000km I change my chains. It was a good place to clean them and change them. The fourth day was the last day in Sumatra. I had to cycle about 10km to the port to take a ferry for Merak which was my first step in Java.

I arrived about 5pm to the port and directly I went to the ferry terminal and took a ferry for Merak. It is nice to tell that before I come to Indonesia many people told me that I have to be careful about my stuff there, but I have to say that one of the most safest places which I have visited is Indonesia. I left all my bicycle and stuffs in the first floor of the ferry and went to the roof top for about 2 hours, but no one paid attention or took my stuff and it was really safe. However I arrived to Merak about 21pm and just directly headed to go out from the town to find a place to stay and again looking for a petrol station. After the first one and also one restaurant did not let me to stay or set up my tent there, I began to cycle in a dark and very narrow road to find another place. It was a quite dangerous cycling there, but no choice. Finally after few km riding I found another petrol station and after a few minutes I was ready to sleep but again the mosquitoes began to bite me and i was just scratching.

In the morning again I took shower in the toilet.just to let you know that the toilet was too small and I had to sit on the toilet and wash myself. So hard job, but necessary.

The fifth day was just cycling in a busy road to Jakarta..about 125km and then meeting my host who is Arianne, a Filipino from HC .