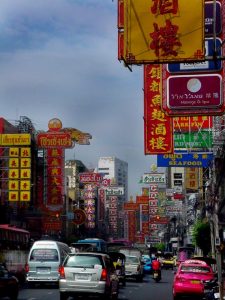 I arrived to Bangkok on 7 November in the afternoon. Airport was like before and everything was running fast, just it was a new life for me and nothing was the same as before for me. It is true that nothing was changed, but life had begun a new story for me and I was on the first step of new road. There was no place to think and just I had to go. I was so happy to be there, due to it was my real life and I felt I am in the right place again. I was so happy.

Directly I went to the town and I got a room in the same hotel I did. I was too tired and I had to sleep for many hours. I had no sleep in last night in Iran, due to the problem which I had for my bicycle, so just I lied on the bed and slept till next day morning and everything began on that day. At first I had to go to Indonesians embassy to apply visa, after I went there, I found that I have to do it in Malaysia and so I am free. There was nothing more to do here, but as always nature do , I fixed a meeting with Mr. Sherenda who is director manager of UNEP ( united nation environmental program ) in AIT ( Asian Institute of Technology).this meeting was managed with Mr. Sadat who is working in ESCAPE. Sorry so many strange words. The meeting was at 9am on Friday and I woke up about 6.after a short shower I jumped on my bicycle to go AIT which is about 50km out of Bangkok. I made a mistake and I thought it is just 40km, so I delayed and I lost the meeting. I arrived about 9:30 and it was too late. He was leaving his room to do a lecture. So .

Ok for sure there is something to do. I heard that the president of AIT is an Iranian professor and it was nice to meet him, but I had to wait till afternoon. It was ok and I did.

During the time I met a lady who is working in UNEP and we did chatting for 30min and he recommended me to go to school in compos to talk to children and show them some pictures about planting tree. It was what I was seeking for.

Maya called principle of school and after having lunch we went there.

They divided students to 3 groups and I had a meeting with each one. Each meeting was about 30min and after visiting pictures we talked about trees and I asked them to tell their opinions about trees and nature. It was amazing. Some of them had wonderful idea and they were so aware about trees. I really was impressed.

I have to say that it was the best project which I did with children. It gave me an idea about how to work better and how to influence them better. I am learning how to act and it is good.

Lets tell what happened after our meeting finished .they all asked me to give them a signature it was so fun. I had to signature about 200 piece of paper, but I was so happy to be with children and it was fine. It was funny, due to I drown a tree for one of them and many of them returned and asked me to do for them as well, I was so happy.

After I finished, 2 of them came to me and handed me a small piece of paper which was written” come back to AIT community school! Love. Namuuna” “please take care yourself! Love. Jirapoal” It is so hard to explain how it has a great feeling being with those children.

After that I went to Dr Irandoost (president of AIT)office to meet him. He was in session but something nice happened. I saw 2 Iranian students there and suddenly one of them run to me and said to me hello Mohammad!!!! What!!! He was one of my friends who were living in the same street as I do and I have not met him for more than 15 years. After that long time we met each other here, even not in Bangkok. In AIT, 50km out of Bangkok. So nice. He invited me to stay with him there a night and I accepted happily. There were many things to talk about and just we talked for a day.I am still here and going to leave tomorrow for Bangkok to meet another friend of mine. I will leave Bangkok next few days to Malaysia and .let see what will happen. For sure everything happen is nice.