Last days of cycling through Alps 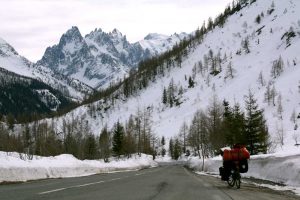 My journey lately in Switzerland was full of moving from one point to another. I had to move a lot to visit different schools, applying for visa and also planning my journey ahead to the direction of France.
I was in Thun again with Renate and Martin. I just stayed there for a night and then I went to Berne with just a backpack.
I was there for a night and again I went to Biel where I had a school to visit and some new friends to make who are like a family for me now. Much closer than a friend.
Klaus’s sister lives in Biel with her family and I had a chance to meet them and stay with them while being in Biel and of course visiting her school for my project.  Changing the date for school was a chance to stay there for few days and get closer more to become like a family. They are lovely, kind and sweet. I was there at home, like my home !! it was wonderful and I was thinking al the time how life is getting nicer as I can make more friends and I feel it. I feel which I have better connection with people now rather than some years ago. Of course that’s because of my experiences of traveling, meeting more people and also being in touch with more people.
as far as I travel I am more blessed with people’s help and supports. They do, they never ask and just help and it makes me love them with no question. I have just received kindness and help from them. 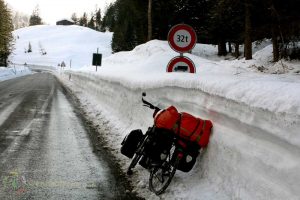 Few days in Biel, having lots of fun, cooking Iranian food and lots of wonderful chats and then I left for Berne again.
I should apply for US visa in Berne and need to stay some days with Benno. It is always nice to have time with him.
After Berne I had to go back again to Reutigon where I left my bags with Renate and Martin. I had just one night to stay with them and I had to leave again but still I kept a chance to come back there again as we have already organized a school to talk on March 19.
It was snowing a lot at night and in the morning everywhere was covered white. It was cold and I had 107km to ride to Monthey which is about 10km south of Aigle.
In the morning Renate and Martin were at work and I had my breakfast and began to pack slowly. I was not in hurry and I took it easy and relax.
Renate sent me a sms telling which is very cold outside and it is better for me to stay there but I have already made my decision and it was time to leave. But anyway it was wonderful to see people care for you and they look after you which is hard to explain how good it is. That’s why I don’t miss home, that’s why I don’t feel stranger anywhere. My home is wherever I am, wherever I go and my family are the ones I am with them. But honestly I was going to miss Renate and Martin as they are wonderful and so nice.
It was a very cold day but luckily I had tail wind all day long and most of the time I had to climb, so I was feeling fine and cold was not bothering me that day. Cycling through Alps was good enough to ignore cold weather and all those hills. It was for me the last day I could cycle through Alps and enjoy mountain. A wonderful way to say goodbye to winter and appreciate the last day of cycling through snowy roads it was. 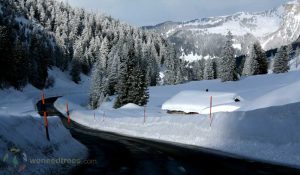 The road was passing through a pass called Con Du Pillon and everything was quite fine till the top of pass. But as soon as I started descending cold started also moving through my skin into my blood. I was feeling cold badly and I had no choice. It was getting dark and I had to finish that road before it gets dark totally. I had 25-30km downhill which I would really appreciate if the weather was fine but not that day as I came to a point which I began to shake. I couldn’t control my body and I was shaking, but no choice and I had to finish it. It was quite dangerous cycling while shaking and having that much cold but I had to continue and I had a big hope to be at a warm place at the end.
I arrived at Monthey at about 7:30 where Nathalie and Nils are living and invited me to stay with them. I arrived on Thursday evening and after having nice lasagna I just died.  Nathalie had already organized a school for tree planting and workshop in a school in Siron which is almost 55km from where they live. Luckily Nils works there and he drove me there in the morning and we came back together.
I was planning to go to Geneva the next day and I had to get there by Saturday. I was planning to get there through French part as I have done it before through Swiss part and it was not that much fun to cycle a road twice.
my route was about 75km to Geneva but when I checked the map I found out which I have Chamonix just 5okm down south. I was talking to Nils nad planning where to go and we found out I can go through Chamonix to Geneva but it will be 155km instead and 2100m climb in total. Not that bad and a nice challenge. Weather should be fine and sunny and I will be fine going through mountains again. It was honestly pity to miss Chamonix and all those beautiful mountains nad I could get much closer to mountains, to Alps. I was not going to miss it then and I could appreciate one more day from winter and Alps. So I decided doing so.
in the morning I woke up and got ready to leave, I packed and loaded my bike but when I was going to say goodbye to Nathalie I realized which I have a broken spoke in rear rim. It was fine and I could fix it myself but the second one showed up and the third ones!!! No way and I could not leave and start cycling like that. It would definitely be a problem soon as well as I had a very strong cold wind coming from the mountain.
we talked a bit with Natalie and at last we found it which is impossible to make that bike work under a heavy loads. So I took a train for the first 20km to Martini where I could find a bicycle shop and fix my bike. I went through the bike shop and asked to fix my bike. It would cost 40 Eur to get it fixed and I just bought 3 spokes which cost me 3 and I fixed it myself. 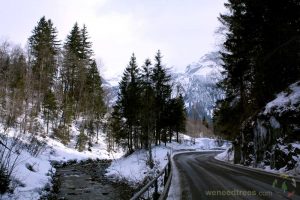 soon after I started cycling I had to climb a long hill up to 1550m from the base of 375m where I was.  Quite long climb, b ut it was all fine as weather was great and warm and scenery also amazingly beautiful.

cycling all day long till evening and because of all stops I had taking pictures and enjoying the road, I couldn’t make it to Geneva before dark. I was thinking either to take a train or not as I was not going to be there so late.
I was going to stay with Marcia and Ron. Marcia was vice principle or International school in Geneva and contacted me to visit school and kindly offered me to stay with them.
that’s why I decided to be there on Saturday and leave my bike there and get a train to Biel and Thun for Monday and Tuesday for the schools I had planned them to visit.
after cycling at night an hour and while I had still 20km ride to Geneva I had a flat tire near a city called Bonneville in France.
I send Marcia a text message and told her which I might be late as still I have a long ride a head. She just replied where are you exactly and after indicating my place she came to pick me with Ron.
I was at home in a warm place and soon after I took a shower Ron invited me to join him to a pub where a group of his friends where going to play 60s music which was so cool.
Sunday I had enough time to spend with Marcia and Ron talking while having breakfast. It was great to be with them. Another wonderful friends, wonderful human beings and a kind of family. I was so glad and feel so good to be with them.
on Sunday I left Geneva for Biel on train and I was there again in the evening with Renate and her family. I was there for 2 days and then I went to Thun where I would meet Renate and Martin again and after having a talk in a kind of religion school we went home.  It was the forth time I was staying with them but the last one. I was really going to miss them.
On Wednesday which was also Persian new year I took a train to Geneva but after organizing a lunch with Tamara for the new year I got off in Lausanne to have lunch and celebrate Iranian new year with Tamara. We went to a very nice café and I ordered rice with fish which is kind of traditional food for new year in Iran.
I was back again to Geneva in the afternoon waiting in front of UN for Paul to finish his work and go with him to stay in his place. I had 2 international schools for the next 2 days. 2 full working days ahead and needed some rest.
But having 3 lovely boys around and nice chat with them , jumping around and playing was enough good to stay with them and have lots of fun .
I will write the rest later…now need to have some sleep as tomorrow I should start cycling toward Paris.