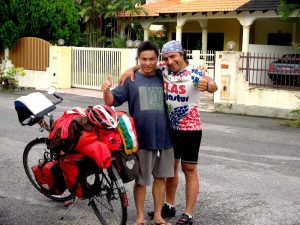 I arrived about afternoon to Kuantan where I was planning to stay for 2 nights. I had someone to stay with who was Yew Kong a member of CS. I arrived to the city and called him and told him where I am, the only thing I could tel him was a Tele Communication tower which I recognize as a point to let him where I am. He easily found my where about and after few minutes he was there with his pick up.

I put my bicycle in and he drove me home. His son and his 9 years daughter were at home.

At the first moment I found it a very friendly place. Yew asked his daughter to call me uncle and it made me feel very comfortable there.

At night when he came back from work we went out to have dinner in a very simple and local restaurant where I really love to eat in and experience the local places. It was a Chinese restaurant just by the street and actually I had my first Chinese sup there. Before I haven’t try any Chinese sup and it was a chance for me to try their food specially before I go to china.

I was planning to stay there just 1 day but right from next day rain started and continued for next 4 days, a very heavy and non stop rain and I could do nothing. I couldn’t leave there and Yew kindly let me stay there till the rain totally stopped. Any way I had a very nice and lovely time with them and just I want to mention few of their hospitality. on the first day morning Yew asked me to take his car and join him for breakfast and after that I drove with Yii wen to the beach to explore Kuantans beaches and roads.

We drove to a very nice beach and I had some nice meditation on the beach. I was surprised how Yii who is just 9 years old know about the roads and streets in city and she almost know all the city which was really surprising. It was I thing May 2007 that I was in Kuantan with Rick and actually Kuantan was the last point of cycling together with Rick where we planted a tree right before we say good bye.

It was so nice to remember all those nice memories.

I was looking fro the trees we had planted with Rick but it was a bit hard for me to found it and I couldn’t explain to Yii its where about. So the only way was finding the picture of our trees and show its location to Yii, so then she found where it is and then just we drove to the place to see our tree. Tree still was there growing. I took a picture to send to Rick.

The tree that Rick and Iplanted last year….

Last few days I was mostly at home and just waiting for rain to stop and the only chance for me to go out was dinner and breakfast with the family.

4 days just 24 hours online and sitting in front of PC made me sick of my computer and internet and I just wanted to jump on my bicycle and go out and be on the road.

Finally the weather changed and on Tuesday rain totally stopped, I packed and after I finished packing I called Yew, he came and we went for breakfast and then it was time to say good bye to my new friends and leave them. I am happy to have some more lovely friends and now I know more about Chinese foods which is really good. I got some videos that I put in you tube so you can see something about where I was. http://www.youtube.com/watch?v=u9mYTn59_XY