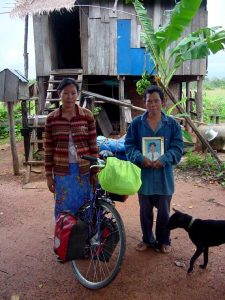 When I left Kampot it was about 8 in the morning on the shiny day, it was too nice having sun and blue sky and not having much rain during cycling. by the first 2km of cycling I stayed somewhere to have a Coconut for drink.Coconat is the best drink which I have experienced in my trip.specialy when I sweat alot, it has salt and nice for rehydration.Just after 5 km cycling I faced with very heavy rain again and I saw that rain is coming from front and just I jumped out from the road stayed under a shelter, wait to rain stop. It was fine due to just after few minutes rain stopped and I could follow again. Really it was nice day, just few times short rain and everywhere was clean and shiny.

Wonderful scenary.people who was working on rice fields, planting rice and playing children’s besides the road, giving sign and saying hello. Almost all children’s say hello to a cyclist on the road in Cambodia; it brought me to Nepal and ridding in Nepal’s roads and Nepaly peoples. sky was playing with cloud, pushing them away ,take them again and it was a harmonic dance on sky, wind was blowing, and leaves were dancing by wind, inviting all opened eyes to see and opened ears to hear that great symphony of nature and for sure opened hearts to feel. So just I kept ridding and just time by time I stopped to take some pictures.

I had 240km cycling from Kampot to Phnom Penh, so I decided to divided to two 120km.so I knew that there is no place to stay at night like a guest house or some stuff like that and I had to find a shelter to put my tent in the evening. One thing is good to know which is Cambodia is not like Thailand which had many places to eat on the road. Here is really difficult to find food on the road and I had to eat just some cake or aweet.however I cycled till afternoon and it was near 6pm and I started looking for a shelter.

I found some but I didn’t finish 120km and I told myself, No you can stay after the sign board of 120km and before that nowhere you stay. Some time I become like that and just I follow a sense without any logical reason and always it is true. so even I found a shelter just 2 km before that ,but I had to finish that properly, so just I ignored it, finally I saw sign board of 120km.thats ok ,now I can stay somewhere and from now I can try to find a place. Just exactly opposite to that sign board I saw a shelter which had a roof, bottum and 3 walls around and just from one side it was open.

It was fine and I could put my tent there. So just I got off the road, run to a small shop near that and asked the lady to let me stay there. Like always she couldn’t speak English at all and just by sign language I understood her I mean.fortunatly she accepted and leaded me to the place. It was wonderful, for me. As a cyclist it was like a nice hotel and 100% fine. I was inside looking around trying to find best place to put my tent, I saw she is talking with somebody, I came out, realized she is talking with a man who was her husband. He said NO you shouldn’t stay there, it isn’t nice and good and you have to come, stay with us!!!!My eyes were getting opened and stared. Wonderful living with a local family. It was fantastic and I could feel their life style from the close.

Also he couldn’t speak English but their heart was huge and no need to talk when you can listen to each others heart. I pushed my bicycle back to their house and man helped me to take off my stuff and bringing them inside. I was out side looking horizon which had no end watching green lands, wondering humanity that sound of lady tarred my dream, she handed me a clean and white tower, showed me a big pot which was the end point of a drain pipe from the roof, full of water from the rain. I am use to shower under rain everyday!! But that one was different and full of sense of humanity and kindness. I took shower and went to their small shop lied on the net bed which was hanged (in Cambodia almost all people lie on the hanging net).3 walking around dogs were looking for food and a person who play with them. The man start to open a can and brought a glass of ice, just I was wondering if he bring me a beer what can I say? I won’t like to say no to his kindness, I couldn’t do, and just I was hopeful to don’t be in hesitating. He brought me a cup of juice with ice.

I was looking them how they are trying to make me happy and help and just I was thinking that it is human and almost all people are like them, just they need a way to prove their kindness, and nothing can make a distance between humans being, not nationality, religion, color and just nothing can do that. After having a meal for dinner we went inside and they brought a suitcase full of pictures and albums. They had 5 children’s and one of them has died the second one which was a guy about 26-27 years. There was a picture on the wall with a small pot of his ash, all he had left for them.withing the albums I found a nice one which was titled “for the loving memory of Dan”. Dan was living in Canada and his friend provided that album for his parents, ever laughing guy on the all pictures and a letter on the end of album from his friend to his parents. I was thinking about Dan and his parents and what they have in their life, simple and small house with great and kind heart, small money but very generous. They were talking about Dan, but I couldn’t understand any, just I felt how they are proud of him. And they kept telling me about him. I tried to sneak my crying eyes, but I couldn’t do anything with my crying heart.

They made a mosquito net for me in a house which had just place for 3-4 person to sleep on the ground and it was all which they have, but kindly they shared that with me. Just rain started again, was hitting roof, I was thinking of Dan and his story falling asleep.

Just by early morning before sun we woke up and after they went out again I slept for one more hour. It was so nice sleeping there and really I didn’t like to leave there, however there was no choice and I had to go and continue. I came down and prepared my bicycle to turn its weels.just I took some picture with the lady,unfortunatly man had left there and I lost chance to say good bye to him. I was leaving, that lady brought me couple of mineral water to fill my bottles and just I was happy. She came side the road and I looked back and gave her a sign, after 100 meter again looked on behind, she was still on the road and one more sign and road turned smoothly to the right and the lady disappeared. after just 1-2 km I stopped somewhere to drink one pack of milk which I had with some sweet,

I was drinking that I saw a bicycle is coming in the other side of road moving his hand, he run to me…wow he was the man ( sorry I couldn’t understand his name when he was telling me that )he run to me and by sign told me you have come back and have breakfast, already he had bought coffee for me and just I came back again very happily.

However after I left there I cycled ahead to the north to Phnom Penh, it was one of my fastest days, I started almost 8:30 and finished it before 3pm.weather was really nice and just few times short rain and nice road and wind from behind, hats all that one cyclist like to have for having a nice cycling day. I had an appointment by 7:30pm in a restaurant with Merlyn who is an English lady, member of hospitality club, so I supposed to stay with her for few days and I had plenty of time and like always cheap internet cafe is the best place to kill the time, hats why I spent almost 3 hours there and just after that I went to the restaurant to have dinner with Merlyn and her friends.